Determining Genetic Risk for the Forgotten

Catherine Tcheandjieu joins Gladstone as an assistant investigator to uncover factors that predispose to disease and may differ between people of different ancestries.

Ever since she was a young girl growing up in a rural town of West Cameroon, caring for sick animals and dissecting mice to see what their organs looked like, Catherine Tcheandjieu (she/her), DVM, PhD, has been fascinated with biology. Now, years later, she is starting her first independent lab by joining Gladstone Institutes as an assistant investigator.

Tcheandjieu is a human geneticist who incorporates machine learning with more traditional statistical approaches to understand the genetic roots of disease. By analyzing immense amounts of genomic and health record data, she develops models to uncover factors that predispose to disease and may differ between people of different ancestries. Her work is especially focused on examining data from Black and Indigenous populations, who have so far been largely understudied.

“There is a huge need for Catherine’s work,” says Katie Pollard, PhD, director of the Gladstone Institute of Data Science and Biotechnology. “Her research has already revealed new pathways that may cause heart disease, which were missed in earlier studies that centered on people with European ancestry. Catherine is a natural trailblazer who already displays impressive leadership at her early career stage.”

In her recent work as a postdoctoral fellow at Stanford University, Tcheandjieu conducted the largest genetic study to date for coronary artery disease in European, African, Hispanic, and Asian populations. Her previous research aimed to predict risk for thyroid cancer and cardiovascular diseases in people of various descent.

“I’m thrilled to be bringing my unique expertise to Gladstone,” says Tcheandjieu. “I think I have a lot to contribute, and also a lot to gain from this organization, its environment, and its culture.”

Finding Your Predisposition to Disease

The human genome contains over 20,000 genes. People have different versions of each gene, and some of these genetic variants are associated with a higher risk of developing certain diseases.

Tcheandjieu is interested in better understanding the specific parts of a person’s genome that contribute to their predisposition to disease. She uses the latest genomics and machine learning technology to define the genes associated with cardiovascular disease in diverse populations, and aims to eventually apply her expertise to other complex disorders too.

“I really want to orient my research to populations that have been understudied and forgotten over time, like African, African American, Latinx, and Indigenous populations. I want to do something that’s going to be useful for me and my family, because we are part of the forgotten.”

Once she identifies genes that contribute to the risk of a particular disease, she combines the information with data on environmental exposure to build models that can predict a person’s risk of developing the disease.

“My goal is that these models will one day allow you to go see your doctor and they can tell you, based on your lifestyle and genetics, ‘This is the likelihood that you will develop a given disease, and this is the prevention protocol that we can put in place to help you avoid that situation,’” says Tcheandjieu.

In addition to providing a new tool to help guide healthcare decisions, her work can help identify genes that could be used as therapeutic targets to cure diseases.

As part of her research, Tcheandjieu compares groups of patients with a certain disease to groups without the disease, and analyzes their DNA for genetic variants. To do so, she uses platforms like the Million Veteran Program from the US Department of Veterans Affairs, which contains genetic information on over 650,000 people.

“This is one of the most diverse data sets in the country, and includes data from over 100,000 African American individuals,” she explains.

Tcheandjieu's long-term goal is to build an African biobank to ensure understudied groups can be correctly represented in future genomic studies.

To date, most studies have relied solely on genetic data from people with European ancestry, who only account for 30 percent of the global population. As a result, the drugs and precision medicine tools developed from those efforts are not necessarily helpful to all patients.

“I really want to orient my research to populations that have been understudied and forgotten over time, like African, African American, Latinx, and Indigenous populations,” Tcheandjieu says. “I want to do something that’s going to be useful for me and my family, because we are part of the forgotten. It’s important to focus on 100 percent of the world population to make sure treatments can help everyone.”

Tcheandjieu grew up in Bafang, an agricultural town in Cameroon. Her passion for research and medicine started when she was 8 years old and decided to adopt a sick newborn baby goat.

“No one could separate me from that baby goat,” she recalls. “We were together 24/7, even sleeping together. In fact, I caught a very bad cold from it, and I ended up having a stuffy nose for years after that.”

When the goat died a few months later, Tcheandjieu was devastated. That’s when she pledged to take care of people and become a doctor. She read biology books and began following her father around, who was a registered nurse specialized in gynecology and obstetrics and essentially acted as the town’s physician.

“My dad was my biggest inspiration, and the person who drove my energy and my willingness to do science. To honor his memory, I decided to switch the focus of my research to cardiovascular disease to see how I could help people.”

At 12 years old, she started setting mouse traps to catch rodents and, using a box-cutter, she would sit in her front yard and dissect them to look at their organs and understand how they are interconnected.

Tcheandjieu eventually got a scholarship to study veterinary medicine in Algeria, where she did her dissertation on using genetic selection to improve economical yield in cows. The field of genetics captivated her so much that she decided to go into research, with the goal of becoming a professor.

She completed her PhD on the epidemiology of thyroid cancer at University Paris-Saclay in France. During that time, she lost her father to complications from a stroke.

“My dad was my biggest inspiration, and the person who drove my energy and my willingness to do science,” she says. “To honor his memory, I decided to switch the focus of my research to cardiovascular disease to see how I could help people.”

So Tcheandjieu next went to Stanford University to study the genetic risk factors for cardiovascular disease. There, she identified several genetic variants linked to the shape and size of the aorta, which could be used for early prediction of aortic valve disease.

By starting her own lab at Gladstone, Tcheandjieu looks forward to pursuing her work in cardiovascular disease, as well as expanding to other areas including neurological and immunological disease.

“I’ve really liked my connection and interaction with other investigators at Gladstone and I can’t wait to collaborate with them,” she says. “Compared to large universities, I don’t feel like a statistic here, but like a person that my colleagues care about. This is the type of place where I want to start my faculty career.”

She also likes that, at Gladstone, she will be relieved of much of the administrative burden that often comes with academic positions.

“Science comes first here,” she adds. “Gladstone has so many professionals to support me, from editors who can help refine my grant applications to people who can raise funds for my big ideas, and I’ve been impressed by how efficient they all are.”

One of Tcheandjieu’s big ideas is to eventually create her own datasets, rather than relying on existing sources.

“I’m early in my career, but what I get really excited about is figuring out a way to build a giant African biobank,” she says.

Africa is the most genetically diverse continent. So, a platform that captures Africa’s genetic diversity would provide a greater opportunity to observe genetic changes that explain disease risk.

But Tcheandjieu doesn’t intend to stop there. She also wants to create a biobank for Indigenous and Native American people.

“These populations have been widely understudied and widely misrepresented, and the consequences have been really bad for people from Black and Indigenous communities,” she says. “I want to make sure they can be correctly represented in future genomic studies, and reap the same benefits of research as others have.”

Catherine Tcheandjieu, DVM, PhD, is an assistant investigator at Gladstone Institutes. She earned a doctorate of veterinary science from the National School of Veterinary Medicine of Algiers in Algeria, and a Master’s degree in public health followed by a PhD in genetic epidemiology from the University of Paris-Saclay in France. She trained as a postdoctoral fellow at Stanford University, where she focused on the genetics of cardiovascular diseases.

Her expertise includes epidemiology, genomics, and statistics, which she applies to complex disorders such as cancer and cardiovascular diseases. She specializes in mining large genomics and epidemiological datasets from diverse populations to discover genetic and environmental factors that predispose to disease and may differ between different ancestries.

Tcheandjieu is a recipient of the Stanford Postdoc Justice, Equity, Diversity and Inclusion (JEDI) Champion Award, the Stanford Jump Start Award, and the Million Veteran Program early career investigator award. She is a co-founder of BlackInCardio. 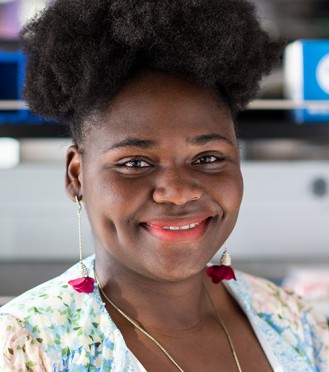