Scientists found that without vaccination, infection with Omicron does not provide robust immunity against other COVID-19 variants. In this photo are the study's first authors, Tongcui Ma (left), Irene Chen (center), and Rahul Suryawanshi (right).

In unvaccinated people, infection with the Omicron variant of SARS-CoV-2 provides little long-term immunity against other variants, according to a new study by researchers at Gladstone Institutes and UC San Francisco (UCSF), published today in the journal Nature.

In experiments using mice and blood samples from donors who were infected with Omicron, the team found that the Omicron variant induces only a weak immune response. In vaccinated individuals, this response—while weak—helped strengthen overall protection against a variety of COVID-19 strains. In those without prior vaccination, however, the immune response failed to confer broad, robust protection against other strains.

“In the unvaccinated population, an infection with Omicron might be roughly equivalent to getting one shot of a vaccine,” says Melanie Ott, MD, PhD, director of the Gladstone Institute of Virology and co-senior author of the new work. “It confers a little bit of protection against COVID-19, but it’s not very broad.”

“This research underscores the importance of staying current with your vaccinations, even if you have previously been infected with the Omicron variant, as you are still likely vulnerable to re-infection,” says co-senior author Jennifer Doudna, PhD, who is a senior investigator at Gladstone, a professor at UC Berkeley, founder of the Innovative Genomics Institute, and an investigator of the Howard Hughes Medical Institute. 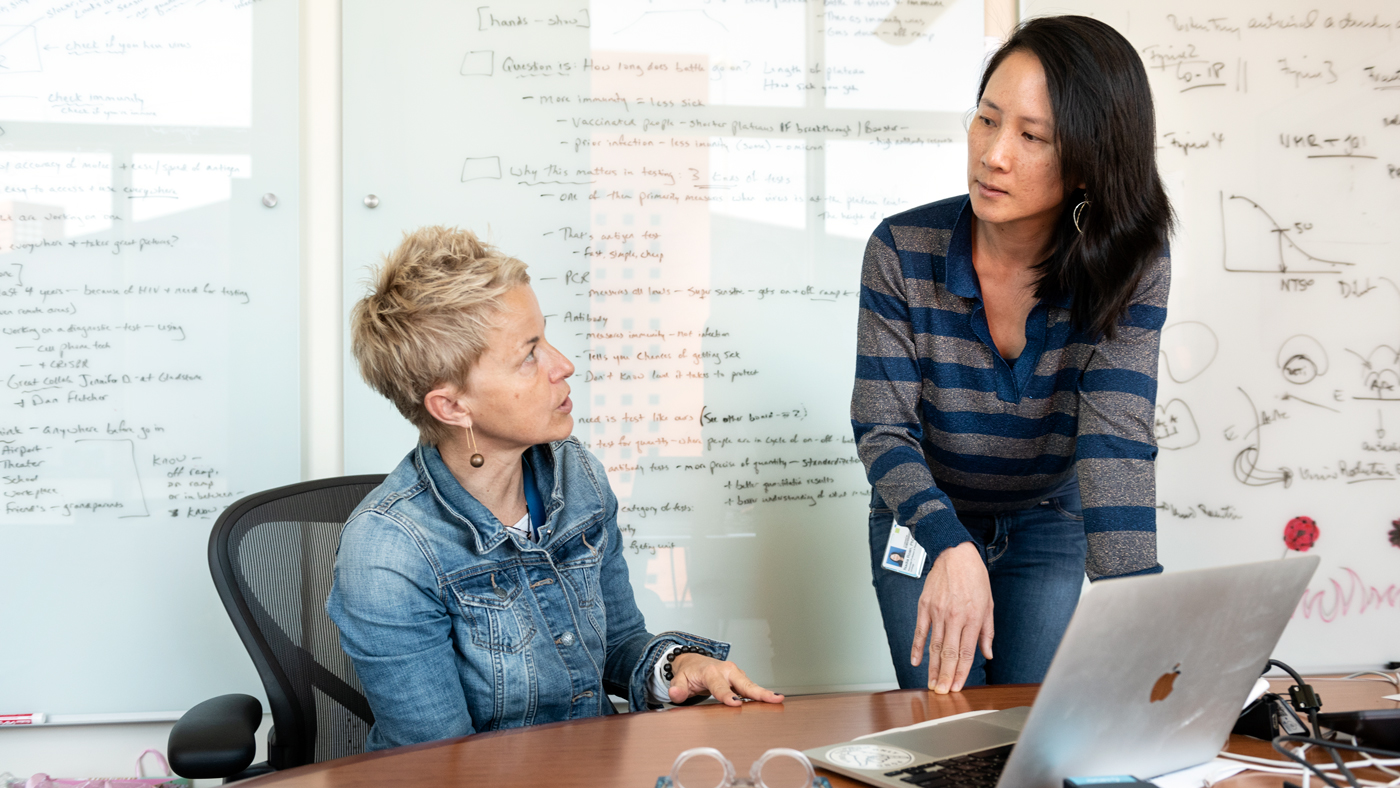 Scientists at Gladstone and UCSF detail the immune response conferred by infection from different COVID-19 variants. In this photo are two of the study's senior authors, Melanie Ott (left) and Nadia Roan (right).

As the Omicron variant of SARS-CoV-2 spread around the globe in late 2021 and early 2022, anecdotal evidence quickly mounted that it was causing less severe symptoms than Delta and other variants of concern. However, scientists weren’t initially sure why that was, or how a weaker infection might impact long-term immunity against COVID-19.

“When the Omicron variant first emerged, a lot of people wondered whether it could essentially act as a vaccine for people who didn’t want to get vaccinated, eliciting a strong and broad-acting immune response,” says Irene Chen, co-first author of the new study and graduate student in Ott’s lab. Other first authors are Rahul Suryawanshi, PhD, a Gladstone staff research scientist, and Tongcui Ma, PhD, scientist in the Roan Lab at Gladstone. 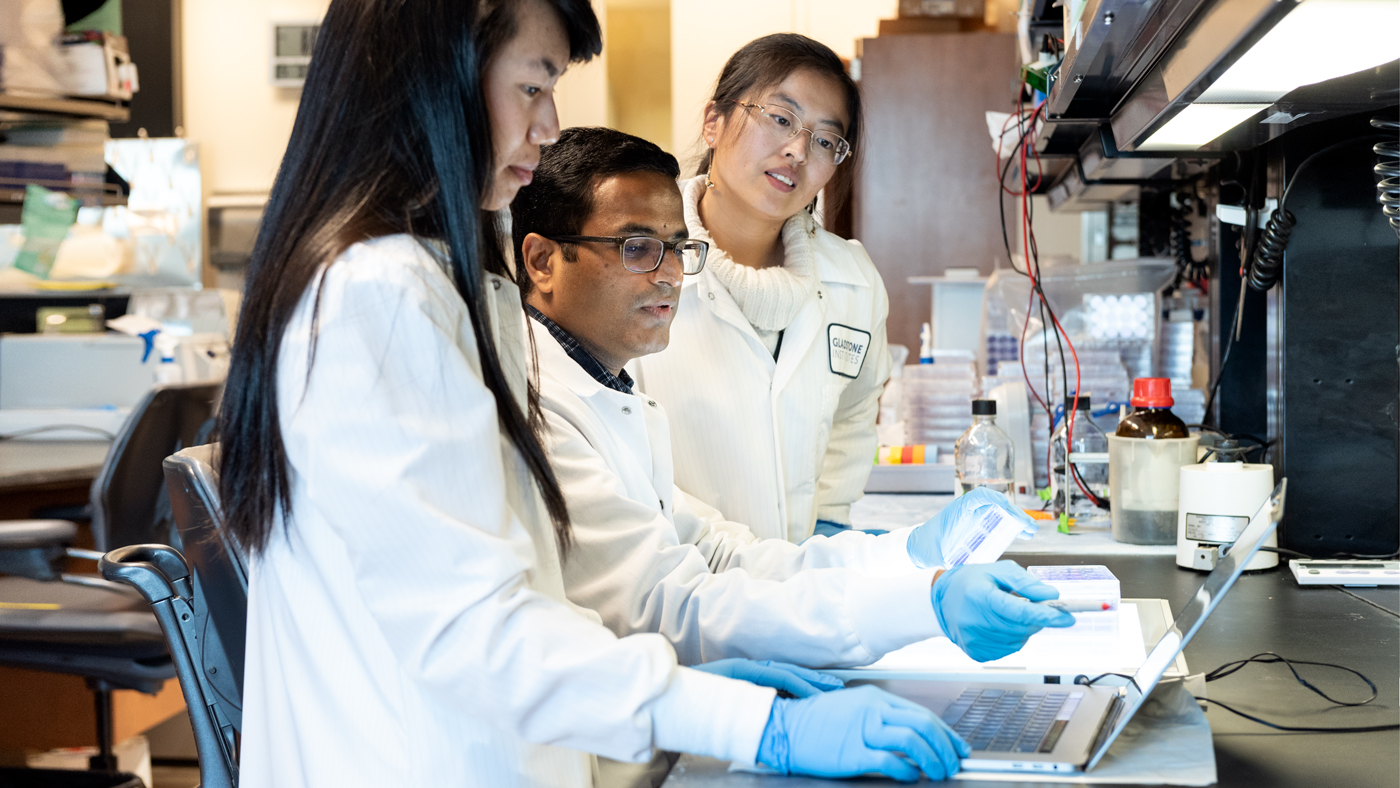 Scientists confirmed that, despite the milder symptoms associated with Omicron, the variant still takes hold in cells and generates an immune response. Left to right: Irene Chen, Rahul Suryawanshi, and Tongcui Ma.

To find the answer, the team of researchers first examined the effect of Omicron in mice. Compared to an ancestral strain of SARS-CoV-2 and the Delta variant, Omicron led to far fewer symptoms in the mice. However, the virus was detected in airway cells, albeit at lower levels. Similarly, Omicron was able to infect isolated human cells but replicated less than other variants.

The team then characterized the immune response generated by Omicron infections. In mice infected with Omicron, despite the milder symptoms, the immune system still generated the T cells and antibodies typically seen in response to other viruses.

“We demonstrated in this study that the lower pathogenicity of Omicron is not because the virus cannot take hold,” says Nadia Roan, PhD, an associate investigator at Gladstone.

That leaves other reasons that might explain why Omicron differs from other variants in terms of symptoms and immunity, including the lower replication seen with Omicron or the types of antibodies that the immune system generates in response to the virus.

To gauge how the immune response against Omicron fared over time, the researchers collected blood samples from mice infected with the ancestral, Delta, or Omicron variants of SARS-CoV-2 and measured the ability of their immune cells and antibodies to recognize five different viral variants—ancestral (WA1), Alpha, Beta, Delta, and Omicron.

However, blood from Omicron-infected mice could only neutralize the Omicron variant.

The new study shows that infection with Omicron does not protect against other variants of COVID-19. In this photo, clear zones on the purple background show the SARS-CoV-2 virus escaping from neutralizing antibodies in patient blood samples.

When they repeated the experiments with blood from vaccinated people, the results were different: vaccinated individuals with confirmed Omicron or Delta breakthrough infections all showed the ability to neutralize all the tested variants, conferring higher protection. The biological samples used in the study were provided by Curative through its vaccine program.

“When it comes to other variants that might evolve in the future, we can’t predict exactly what would happen, but based on these results, I’d suspect that unvaccinated people who were infected with Omicron will have very little protection,” says Ott. “But on the contrary, vaccinated individuals are likely to be more broadly protected against future variants, especially if they had a breakthrough infection.”

“Our results may be useful not only to inform individuals’ decisions on vaccination, but also for the design of future COVID-19 vaccines that confer broad protection against many variants,” says Charles Chiu, MD, PhD, a professor of infectious diseases at UCSF and a co-senior author of the work.

The paper “Limited Cross-Variant Immunity after Infection with the SARS-CoV-2 Omicron Variant Without Vaccination” was published in the journal Nature on May 17, 2022.

The work was supported by the National Institutes of Health (grants F31 AI164671-01, U54HL147127 and R21AI59666), the Natural Sciences and Engineering Research Council of Canada (PDF-533021-2019), the Roddenberry Foundation, Pamela and Edward Taft, the Howard Hughes Medical Institute, the Van Auken Private Foundation, David Henke, Emergent Ventures at the Mercatus Center (Fast Grants #2164 and #2208), George Mason University, the Innovative Genomics Institute, the US Centers for Disease Control and Prevention (75D30121C10991), Abbott Laboratories, and the Sandler Program for Breakthrough Biomedical Research at UCSF.