Melanie Ott’s lab studies viruses that infect humans, and applies the lessons learned to new and emerging viruses. Founded at the peak of the AIDS epidemic, the lab has since broadened its scope from HIV to other viruses with global relevance such as Hepatitis C Virus, Zika Virus, and SARS-CoV-2. The Ott Lab combines broad expertise—in virology, cell biology, biochemistry, systems biology, and chromatin biology—with a diverse and highly collaborative approach. They focus on human-host factors restricting or enabling viral infections, and build and study complex primary cell systems, such as organoids, to model physiological conditions closely. Ott’s team leads the HOPE Collaboratory, an NIH-funded multidisciplinary research consortium dedicated to eradicating HIV. 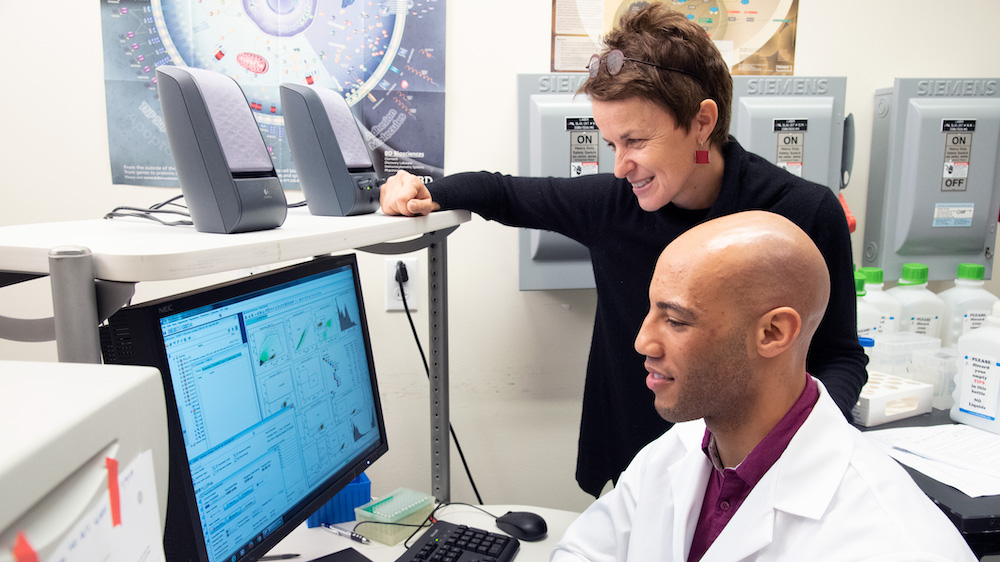 Developing a diagnostic platform that combines CRISPR-based biochemistry with smartphone optics for the rapid and quantitative detection of RNA viruses—including SARS-CoV-2 and HIV.
Utilizing human organoids derived from adult tissues, adult stem cells, or induced pluripotent stem cells to model infection of the lung, liver, intestine, brain, or airways.
Building a library of all the proteins encoded in the genomes of HIV, Zika, influenza, SARS-CoV-2, and others as a resource for the research community.
Adapting single-cell and bulk genomic, transcriptomic, and proteomic technology to analyze organoids and immune cells, and innovative chromatin tools to study latent HIV provirus.

The Ott Lab has uncovered a number of ways in which viruses harness the biology of human cells to their own benefit and to the detriment of their hosts. These findings pave the way for the development of therapies that target the virus-host interface.

For instance, the lab demonstrated the importance of non-histone protein acetylation in HIV transcription and latency, ushering in the use of drugs that block acetylation as a potential step toward the eradication of HIV. They discovered a major pathway explaining hepatitis C virus’s dependence on lipid droplets inside liver cells, and identified nonsense-mediated RNA decay as a new host defense against RNA viruses that is inactivated by Zika virus.

Since the beginning of the COVID-19 pandemic, Ott’s lab and collaborators developed a testing platform that detect SARS-CoV-2 RNA without amplification, using CRISPR/Cas13a and a mobile phone. The platform could be deployed for rapid molecular testing at home or at a point-of-care facility.

They have used genome-wide CRISPR screens to identify host pathways enabling the replication of SARS-CoV-2 and of common cold coronaviruses as the basis for new pan-coronaviral therapeutic strategies.

They have also characterized Delta, Epsilon, and Omicron variants with pseudotyped viruses, virus-like particles and full-length molecular clones to identify mutations in S and N proteins that increase viral spread.

Ott is passionate about using viruses to find fundamental new biology in host cells. She has made important discoveries about how viruses—including the hepatitis C virus and Zika—hijack human cells, and has contributed to efforts to eradicate HIV by gaining insight into viral transcriptional control. Since the outbreak of the COVID-19 pandemic, she pivoted the focus of her team and spearheaded the effort to establish a dedicated airborne pathogen BSL-3 lab to enable work on live SARS-CoV-2.

Prior to joining Gladstone in 2002, Ott started her own research group at the German Cancer Research Center in Heidelberg, Germany, working closely with Nobel laureate Harald zur Hausen. She is a trained neurologist with an MD from the University of Frankfurt/Main in Germany. She transitioned to basic virology research during the AIDS crisis, earning a PhD in molecular medicine from the Elmezzi Graduate School in Manhasset, New York.

Ott has received several honors, including the Young Researcher Award at the European Conference on Experimental AIDS Research and the Hellman Award. She is a member of the Association of American Physicians and a Fellow of the American Academy of Microbiology. She is a recipient of the Chancellor’s Award for Public Service from UCSF for her work as the founder and co-chair of the student outreach committee at Gladstone. Ott also received the California Life Sciences Association’s Biotechnology Educator Pantheon Award for establishing the PUMAS (Promoting Underrepresented Minorities Advancing in the Sciences) internship program at Gladstone, which seeks to increase diversity in STEM.

“I worked as a neurologist when the first genome was sequenced and PCR was discovered. This triggered my passion for the molecular basis of diseases.”

2018 Fellow of the American Academy of Microbiology (Elected)