Sometimes biology is cruel. Sometimes simply a one-letter change in the human genetic code is the difference between health and a deadly disease. But even though doctors and scientists have long studied the often devastating disorders caused by these tiny changes, replicating these changes in the lab in order to study them in human stem cells has proven challenging. But now, scientists at the Gladstone Institutes have found a way to efficiently edit the human genome one letter at a time—not only boosting researchers’ ability to model human disease, but also paving the way for therapies that cure disease—by fixing these so-called ‘bugs’ in a patient’s genetic code.

Led by Gladstone Investigator Bruce Conklin, MD, the research team describes in the latest issue of Nature Methods how they have solved one of science and medicine’s most pressing problems: how to efficiently and accurately capture rare genetic mutations that cause disease—as well as how to fix them. This pioneering technique highlights the type of out-of-the-box thinking that is often critical for scientific success.

“Advances in human genetics have led to the discovery of hundreds of genetic changes linked to disease, but until now we’ve lacked an efficient means of studying them,” explained Dr. Conklin. “To meet this challenge, we must have the capability to engineer the human genome, one letter at a time, with tools that are efficient, robust and accurate. And the method that we outline in our study does just that.” 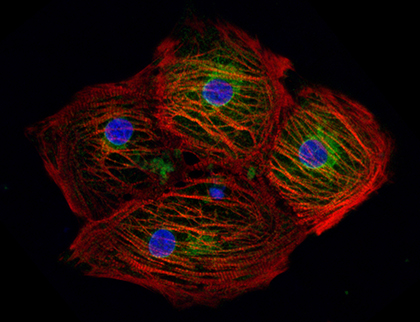 Beating-heart cells derived from iPS cells are shown in the above photo. A single DNA base-pair of the PRKAG2 gene was edited using the method developed by Drs. Miyaoka and Conklin. [Image: Luke Judge]

Needle in a Haystack

One of the major challenges preventing researchers from efficiently generating and studying these genetic diseases is that they can exist at frequencies as low as one-in-a-thousand, making the task of finding and studying them labor-intensive.

“For our method to work, we needed to find a way to efficiently identify a single mutation in a cell among hundreds of normal, healthy cells,” explained Gladstone Research Scientist Yuichiro Miyaoka, PhD, the paper’s lead author. “So we designed a special fluorescent probe that would distinguish the mutated sequence from the original sequences. We were then able to sort through both sets of sequences and detect mutant cells—even when they made up as little one in every thousand cells. This is a level of sensitivity more than one hundred times greater than traditional methods.”

The team then applied these new methods to induced pluripotent stem cells, or iPS cells. These cells, derived from the skin cells of human patients, have the same genetic makeup—including any potential disease-causing mutations—as the patient. In this case, the research team first used a highly advanced gene-editing technique called TALENs to introduce a specific mutation into the genome. Some gene-editing techniques, while effective at modifying the genetic code, involve the use of genetic markers that then leave a ‘scar’ on the newly edited genome. These scars can then affect subsequent generations of cells, complicating future analysis. Although TALENs, and other similarly advanced tools, are able to make a clean, scarless single letter edits, these edits are very rare, so that new technique from the Conklin lab is needed.

“Our method provides a novel way to capture and amplify specific mutations that are normally exceedingly rare,” said Dr. Conklin. “Our high-efficiency, high-fidelity method could very well be the basis for the next phase of human genetics research.”

"Now that powerful gene-editing tools, such as TALENs, are readily available, the next step is to streamline their implementation into stem cell research,” said Dirk Hockemeyer, PhD, assistant professor of molecular and cellular biology at the University of California, Berkeley, who was not involved in this study. “This process will be greatly facilitated by the method described by Dr. Conklin and colleagues."

“Some of the most devastating diseases we face are caused by the tiniest of genetic changes,” added Dr. Conklin. “But we are hopeful that our technique, by treating the human genome like lines of computer code, could one day be used to reverse these harmful mutations, and essentially repair the damaged code.”

Commuting to the Lab during a Pandemic: Meet the Scientists Who Are Studying COVID-19

While many are working from home, these scientists are continuing to go to the lab in hopes of making a discovery that could lead to the end of the COVID-19 pandemic.

Protecting the Heart from COVID-19

Cardiac effects of COVID-19 are starting to show in patients and researchers are ready to fight it.

Learn more about CRISPR, a disruptive technology influencing advances in treatment and cures of diseases through gene editing.