Senior Investigator Leor Weinberger, PhD, received an NIH Director’s Transformative Research Award with collaborator Robert Rodick of VxBiosciences to fund the development of a single-administration antiviral to prevent and treat COVID-19, in particular future variants. The new work follows decades of research into a similar strategy against HIV.

Vijay Ramani of UC San Francisco, who will join Gladstone as an assistant investigator this fall, won an NIH Director’s New Innovator Award, given to early-career scientists with unusually creative ideas. The award will support his unique experiments probing how levels of certain molecules within living cells are linked to the biology of those cells. Insights from Ramani’s studies have implications for treating a variety of diseases, including cancers.

This year, the NIH awarded 106 Director’s Awards grants as part of the Common Fund’s High-Risk, High-Reward Research Program. This program helps catalyze scientific discovery by supporting research proposals that, due to their inherent risk, may struggle in the traditional peer-review process. This year, funds provided through the CARES Act helped support additional funding opportunities for COVID-19 related research such as Weinberger’s work.

A Therapy That Can Go Viral

SARS-CoV-2, like all viruses, slowly accumulates mutations as it copies itself and spreads between individuals. Current antiviral drugs and vaccines, however, don’t evolve—this means they often have to be redesigned to target new variants of a virus.

Weinberger has spent nearly two decades studying HIV and developing a fundamentally new type of vaccine; one that prevents disease by piggybacking on the HIV virus to steal critical replication resources, tracking HIV as it evolves. The “therapeutic interfering particles” (TIPs) used in his approach are inspired by defective virus particles that occur naturally in many viruses and can be thought of as extremely stripped-down live-attenuated vaccines that incorporate only a few select virus components to compete with the virus for molecular resources. TIPs are harmless to human cells and are entering human clinical trials supported by the NIH and the Military Infectious Disease Research Program. 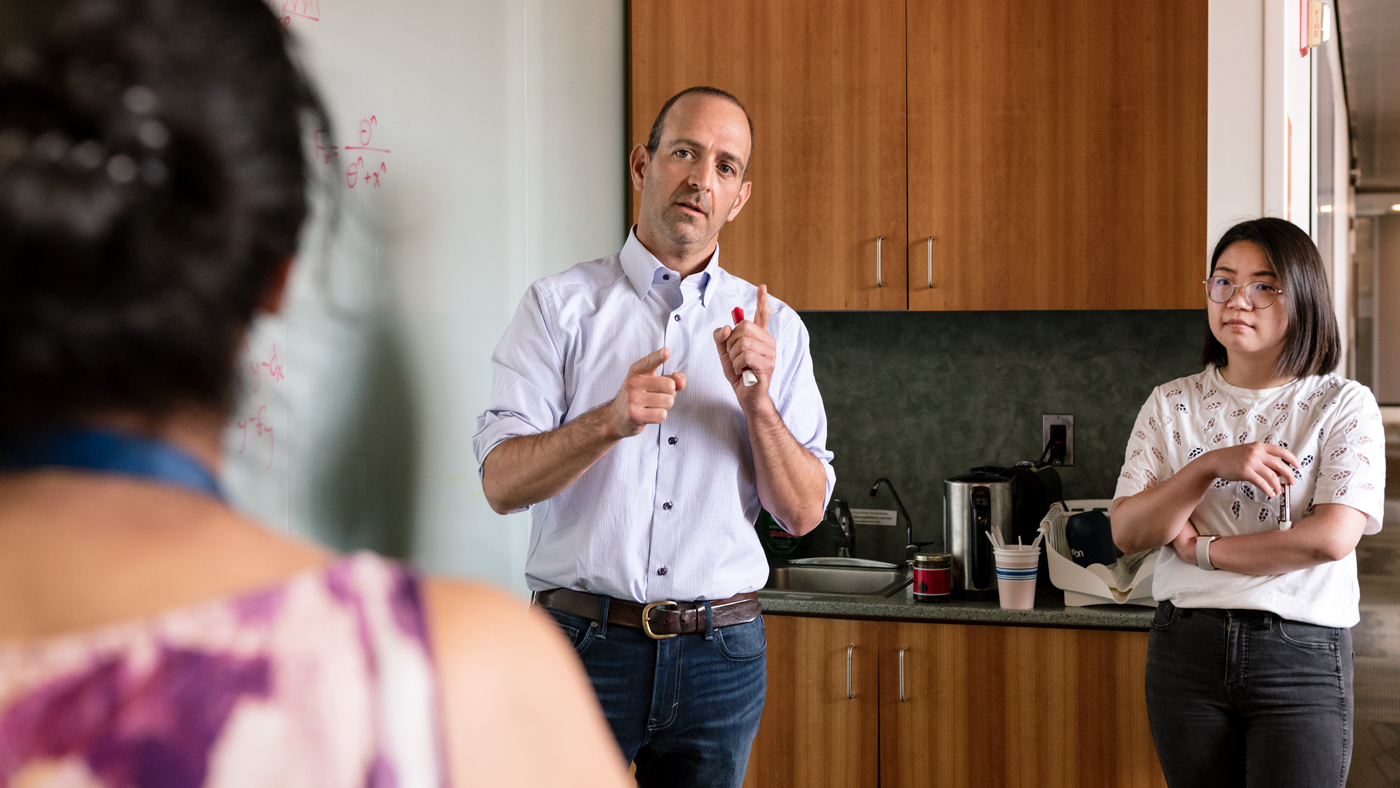 Leor Weinberger (center) and his team are working on a new approach to a vaccine for COVID-19, which is moving toward clinical trials in humans. On the right is postdoctoral scholar Xinyue Chen.

When the COVID-19 pandemic hit, Weinberger and Rodick quickly pivoted their research, repurposing TIPs to target SARS-CoV-2. Over the past year and a half, they’ve conducted pre-clinical trials showing that a single administration of TIPs delivered intranasally can both prevent and treat COVID-19 in animal models and inhibit all SARS-CoV-2 variants, including distant coronaviruses. Most excitingly, TIPs prevent transmission of SARS-CoV-2 in animals, which current approaches fail to do. With the new NIH Director’s Award, the researchers will continue moving the work toward clinical trials in humans.

“On the one hand, an award like this is validation from the director of the NIH that this approach has real potential for COVID-19,” says Weinberger, who is also the William and Ute Bowes Distinguished Professor and director of the Center for Cell Circuitry at Gladstone, as well as a professor of biochemistry and biophysics, and pharmaceutical chemistry at UCSF. “More importantly, this support will enable us to get this very promising therapeutic to the clinic more quickly by taking advantage of NIH resources and regulatory avenues.”

“Our goal is to create a countermeasure for COVID-19 that is safe and effective at reducing illness and death,” adds Rodick. “It’s really motivating to see such a respected institution as the NIH begin to embrace this next wave of therapeutic.”

In more than half of all human cancers, the gene MYC is regulated abnormally—often present at higher-than-usual levels. But MYC doesn’t act alone; the gene alters dozens of molecules called transcription factors, which control whether other genes get turned on or off. Understanding how each of these transcription factors change cellular behavior could provide hints on how to treat MYC-related cancers.

Ramani has developed a state-of-the-art method to alter levels of MYC-family transcription factors in living cells, and then study the effect on genes and molecules within the cell, as well as on the cell’s overall growth and metabolism. His technology, called sci-Plex and described in a Science paper last year, lets him and his colleagues study thousands of different cells at once as they turn up and down levels of transcription factors. 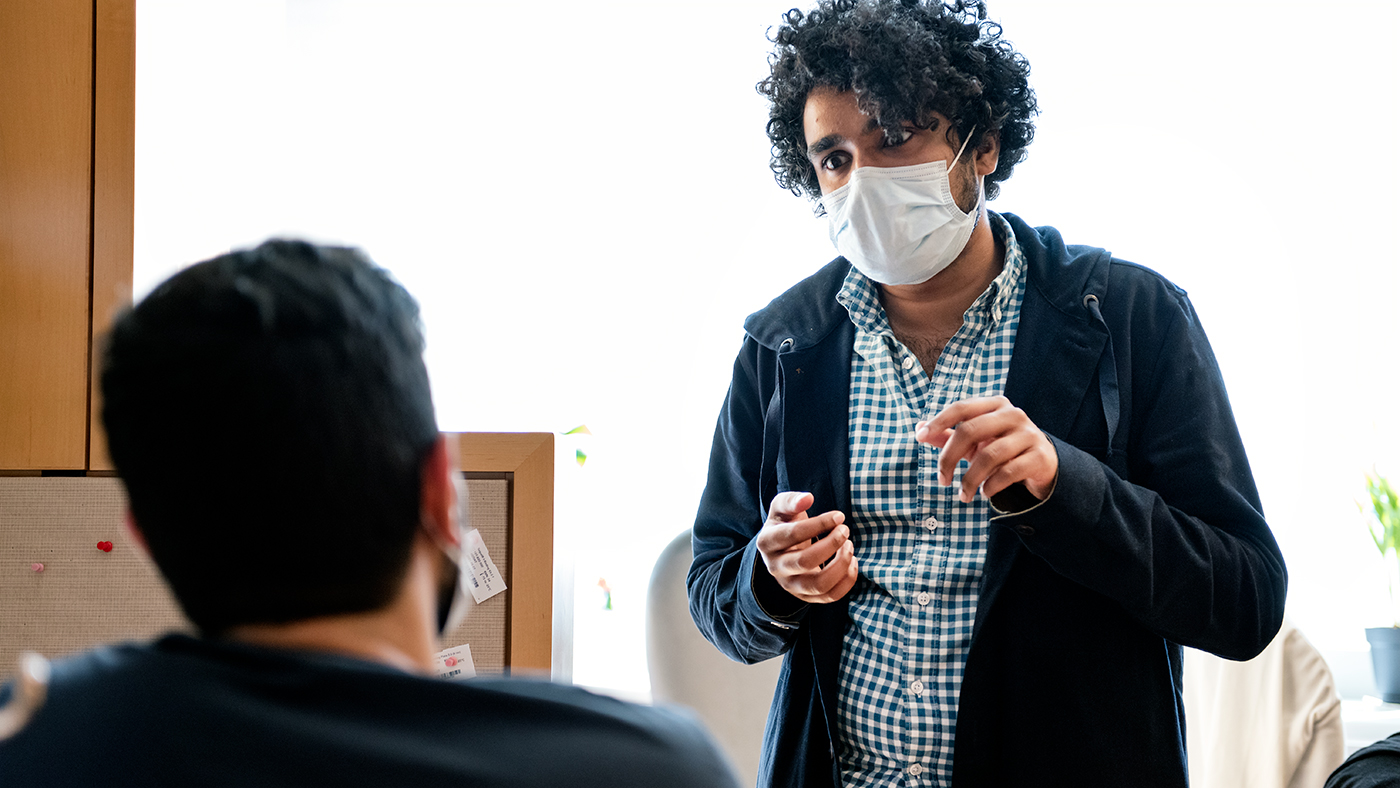 Vijay Ramani aims to gain a deeper understand of the biology of transcription factors and use that knowledge to propose better cancer therapies.

“We’re essentially trying to figure out chemical dials that allow us to control the behavior of cells,” says Ramani. “We want to know whether there’s a dial for dictating how druggable a cancer is, or how immunologically active a cancer is.”

Beyond illuminating potential ways to treat tumors, this research has wider implications for understanding the general biology of transcription factors and how they can change a cell’s state in both health and disease.