Nadia Roan, who studies HIV infection and the immune system, joins Gladstone as an associate investigator.

Nadia Roan, PhD, who first came to Gladstone Institutes as a postdoctoral scholar in 2007 and has been a visiting scientist since 2012, is now joining the biomedical research institution as an associate investigator. Her work focuses on HIV and the immune system, and has recently broadened to understanding the immune response to infection by SARS-CoV-2, the virus responsible for the COVID-19 pandemic.

Using technologies that allow her to track the immune system one cell at a time, Roan has been identifying the cells that HIV prefers to infect and the cells where the virus hides in individuals on antiretroviral therapy.

Her focus on HIV—and recently on SARS-CoV-2—combined with her strong interest in immunology make her a natural fit for the newly created Gladstone Institute of Virology.

“I’m delighted that Nadia is joining our team as an investigator,” says Melanie Ott, MD, PhD, who directs the institute and recruited Roan. “She is a very talented scientist and has been a wonderful colleague over the years. Her deep knowledge of immunology and human pathologies, along with her expertise in state-of-the-art technology for the analysis of single cells, make her a great asset for our institute and a wonderful inspiration for our trainees.”

In her lab at Gladstone, Roan will continue her work on HIV, and apply ever more sophisticated approaches to study how the immune system works, including its interaction with viruses.

“I’m happy for this opportunity to run a lab in such a collaborative environment, and alongside colleagues with such wide-ranging expertise,” says Roan, who is also an associate professor of urology at UC San Francisco (UCSF). “And with Gladstone’s combination of basic and translational research, I feel like my work truly has the potential to lessen human suffering.”

“Nadia is an excellent addition to our group of outstanding scientists,” says Gladstone President Deepak Srivastava, MD. “Her dogged pursuit of the mechanisms by which HIV infects cells and hides from treatment is opening new paths toward a cure. Her work directly contributes to Gladstone’s mission to drive a new era of discovery in disease-oriented science.”

Some researchers know early on that they want to be scientists when they grow up. But not Roan.

As a child, the Berkeley native liked dance and soccer, and although her dad was a mathematician, she was not inspired to follow in his footsteps. “I would accompany him at conferences, and thought mathematicians were really odd people,” she recalls jokingly.

Her call came in college, when instead of taking a summer job as a camp counselor, she unexpectedly landed a paid undergrad internship in the lab of UC Berkeley protein biochemist Tom Alber. He treated her not just like a pair of hands, but like a budding scientist, and she ended up working in his lab for the next 3 years.

“Tom gave me my own project, which was really exciting,” Roan recalls. “I wasn’t just helping others with bits and pieces. From the beginning, I was told: ‘This is the fundamental problem that we have. This is why it’s important to address this problem. How should we go about it?’”

She loved being handed a problem and having the freedom to design her own way to try address it. She also learned about the academic career path, of which she had so far little idea. And she was hooked. She went directly to graduate school at Harvard after completing her undergraduate training at UC Berkeley.

She had her path all planned out—she would continue working on proteins, as she had in the Alber Lab. But grad school opened her eyes to a whole other world. In Michael Starnbach’s lab, which studies the immune response to various pathogens, she found the concept of immunology captivating.

“When a microbial pathogen enters your body, your entire body wages war against it,” she says. “It’s so complicated, yet so fascinating. It can even remember past infections.”

At the end of her PhD, Roan wanted to continue working on T cells, a type of immune cells that play a central role in orchestrating the body’s response to a foreign invader. She also wanted to tackle a major public health problem. So, she moved back to the Bay Area and joined Warner Greene’s lab as a postdoc to learn more about HIV, a virus that targets T cells.

By the time Roan arrived in the Greene Lab in fall of 2007, HIV/AIDS was no longer a deadly disease, at least in the US and other developed countries, thanks to the development of antiretroviral therapy. This treatment has transformed HIV/AIDS into a viable chronic condition. However, it does not cure patients from their infection, and they must remain on antiretroviral therapy for their entire life—or experience a deadly resurgence of the virus. Furthermore, many infected individuals in the world do not have access to this therapy.

“HIV/AIDS is not a solved disease,” says Roan. “When individuals go off antiretroviral therapy, almost inevitably, within a period of a few weeks, the virus comes back, which is why HIV therapy is still a lifelong one.”

The reason the virus comes back is that even after the treatment, some virus remains hidden in a reservoir of so-called latently infected cells. In these cells, the virus is mostly dormant, but it can wake up on occasion and initiate a new round of infection.

One of Roan’s goals is to help develop a cure for HIV by finding ways to eliminate latently infected cells. But these cells are both vanishingly rare and invisible to most detection methods, making them difficult to target.

She and her team recently identified proteins that mark latently infected cells, which will make it easier for scientists to isolate them, study them, and eventually develop drugs that can target them.

“Without question, Nadia is doing some of the most exciting and original research in the entire HIV cure area,” says Warner C. Greene, MD, PhD, director of the Center for HIV Cure Research at Gladstone. “I am so pleased that she is joining Gladstone as a full-time investigator.”

Roan’s work also focuses on other aspects of HIV pathology. One is how the virus is transmitted during sexual intercourse, particularly in women.

“Women make up more than 50 percent of the people who are infected worldwide, yet they are often overlooked in HIV studies,” she says.

Her lab is working to identify the T cells that are infected in the female reproductive tract, the most common initial site of HIV exposure in women. They are also studying how HIV manipulates these cells to promote its own propagation in the body of an infected individual. The goal of this research is to develop more effective preventative measures to protect people from acquiring HIV.

When the COVID-19 pandemic struck in early 2020, Roan decided to take on this new public health challenge. She realized that many of the tools she had developed to study HIV could be used to analyze how the immune system responds to infection by SARS-CoV-2, the virus that causes COVID-19.

Her team uncovered that multiple T cell populations can recognize SARS-CoV-2, and that these cells have the ability to renew themselves, potentially explaining why they can be detected months after recovery from COVID-19. This work could help better understand what constitutes an effective and long-lasting immune response to SARS-CoV-2, and inform the development of potent vaccines. 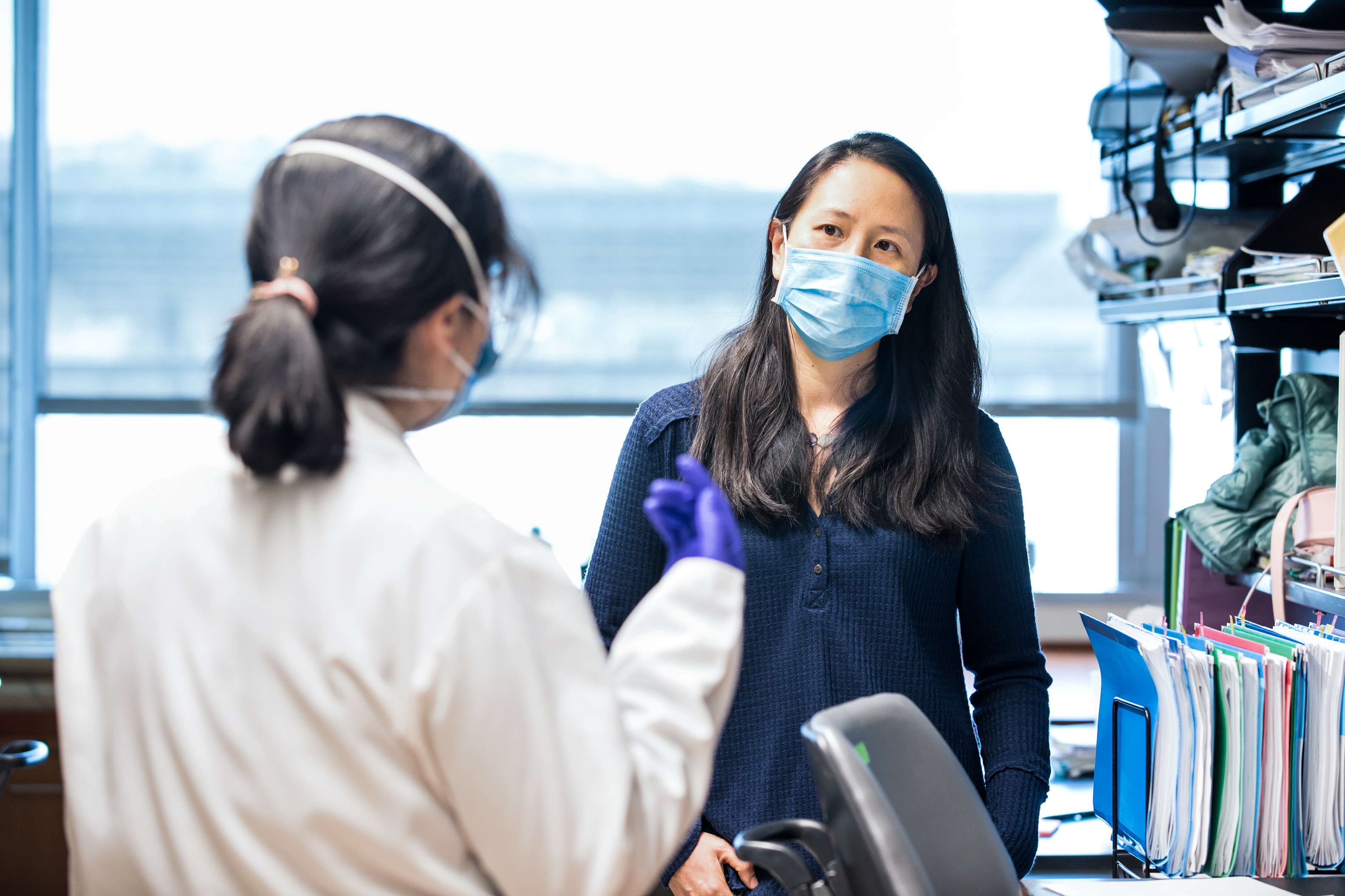 Roan (right) and her lab use single-cell technologies to study HIV and COVID-19.

Over the past few years, Roan’s work has relied heavily on a technology called CyTOF. When coupled with sophisticated bioinformatics tools, this method can analyze individual cells in a large population—for instance, the population of all immune cells present in a patient’s blood.

It is with CyTOF that Roan was able to pinpoint the exact type of T cells that HIV prefers to infect and define the properties of latent reservoir cells in individuals living with HIV. And she rapidly parlayed her expertise with CyTOF into her investigation of the T cells of COVID-19 patients.

But as other methods of analyzing single cells become available, Roan is eager to try them out. One is single-cell RNA sequencing, which looks at all the genes that are active in each cell.

“With CyTOF, you can measure about 40 proteins at once,” she says. “But with single-cell RNA sequencing, you can look at thousands of genes in the genome. And by pairing this with other tools such as DNA-barcoded antibodies, you can also get information about the proteins on the surface of the same cells. There is so much you can do with that information, if you ask the right questions.”

And asking the right questions is not just an intellectual imperative. Single-cell analysis is costly and generates a lot of data that can be hard to wade through, even with the help of bioinformatics.

“You have to be smart about how you use single-cell analysis,” adds Roan. “You shouldn’t do it on millions of cells just because the technology makes it possible, as it’s a waste of resources. Clever computational approaches are key to making sense of high-dimensional datasets, and that is a great strength here at Gladstone.”

This affinity for practical problem-solving, combined with her curiosity and taste for novelty, drove her into science and still drives her research today. Just like she did as an undergrad in the Alber Lab, Roan still looks at a problem and asks, “What’s the best way to solve it?”

And her curiosity remains intact.

“I still wonder how HIV, being such a simple virus, can do so many things to the entire host immune system,” she says. “Just understanding that from the basic science perspective is really fascinating.”

But, she adds, “The thought that what we’re doing has the potential to contribute toward developing new cures or prevent devastating human diseases, that’s my main motivator.”

Nadia Roan, PhD, is an associate investigator at Gladstone Institutes and an associate professor of urology at UCSF.

She received her undergraduate training from UC Berkeley, and completed her PhD in the biological and biomedical sciences program at Harvard Medical School studying T cell responses to the bacterium Chlamydia trachomatis. She conducted her postdoctoral studies at Gladstone Institutes, where she studied the mechanisms by which host factors in human semen influence HIV infection. As a staff scientist at Gladstone, she further identified and characterized novel factors from semen that influence infection outcome. Since starting her own lab in the department of urology at UCSF, she continued to study the relationship between semen factors, HIV transmission, and reproductive health, and pursued research to more broadly understand the mechanisms by which HIV establishes infection in mucosal tissues and persists in people living with HIV.

The current focus of her lab is to use single-cell analytical approaches including CyTOF to characterize the molecular basis of cellular susceptibility to HIV infection and pathogenesis, and to identify signatures of infectious and reproductive diseases in humans.

Here’s What You Should Know about Monkeypox