A new study led by scientists at Gladstone—Mark Petersen (left), Katerina Akassoglou (center), and Reshmi Tognatta (right)—identifies a promising therapy that could improve the repair of damaged myelin.

In the nearly 1 million Americans living with multiple sclerosis, the fatty substance that insulates the nerves of the central nervous system—called myelin—is damaged. This slows the transmission of signals from their brain to the rest of their body, which causes movement difficulties, vision problems, and cognitive changes.

Clinical trials are currently testing drugs that were shown in lab-based studies to stimulate the production of new myelin. However, in the brains of patients with multiple sclerosis, cells are surrounded by toxic elements from the blood and the immune system that inhibit the repair of damaged myelin, so it remains unclear whether the drugs can be effective in humans.

A new study by scientists at Gladstone Institutes led by Senior Investigator Katerina Akassoglou, PhD, shows that many of the drugs currently in trials may not be sufficient to promote repair within these cells’ toxic environment and identifies a different treatment option that could improve the repair of myelin. The study, performed in collaboration with UC San Diego and the University of Vienna, Austria, is published in the journal Brain. 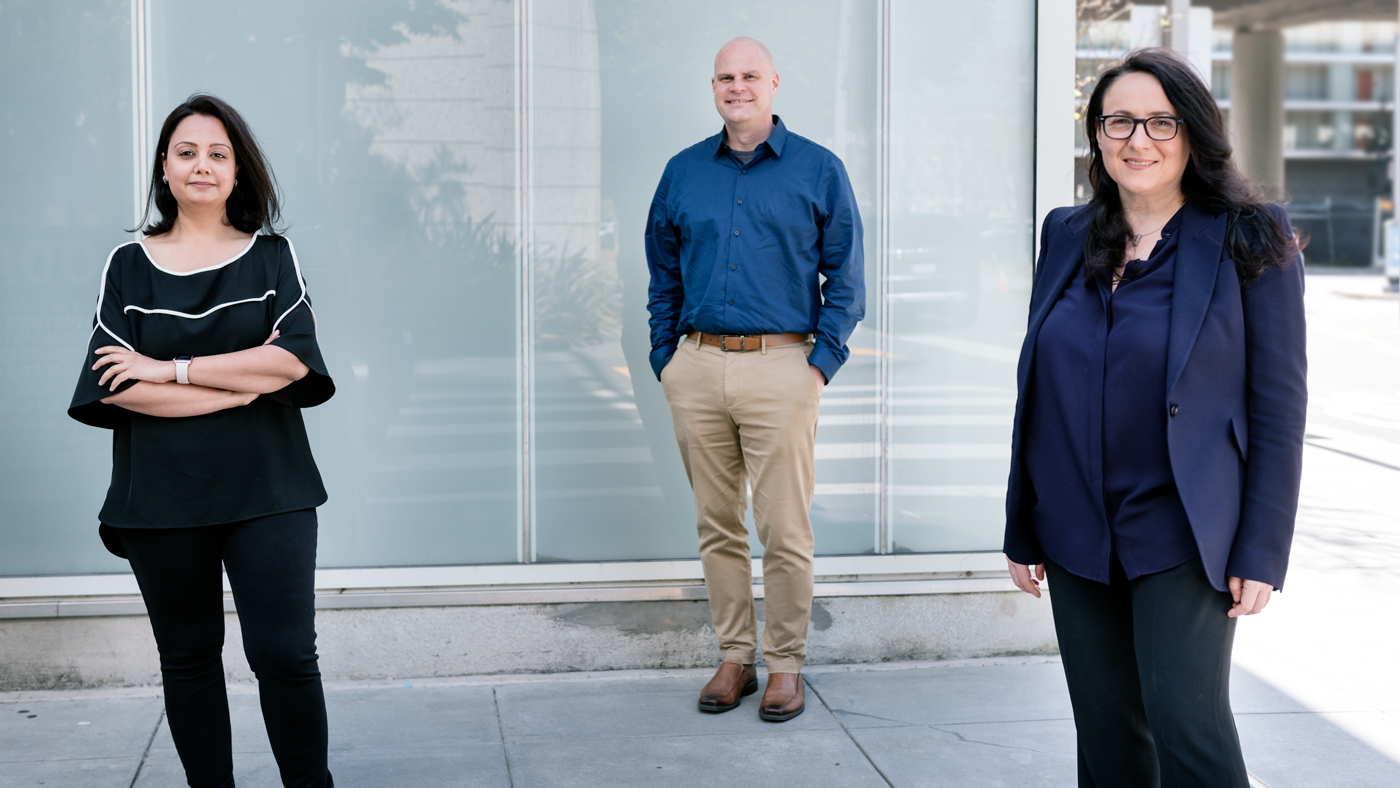 “We found a new line of drugs that could potentially be used to stimulate myelin repair even in the presence of toxic blood leaks in the brain,” explains Akassoglou, who is also the director of the Center for Neurovascular Brain Immunology at Gladstone and a professor of neurology at UC San Francisco (UCSF).

Normally, in an attempt to restore insulation to damaged nerves, specialized repair cells in the brain can transform into cells called oligodendrocytes, which produce new myelin.

Drugs in clinical trials are intended to boost this formation of mature oligodendrocytes as a way of increasing myelin production. However, many of these drugs were initially tested on cells grown in laboratory dishes, which didn’t account for the fact that, in disease, toxic elements are also present in a cell’s environment.

In multiple sclerosis, one such element is fibrinogen, a blood-clotting protein that leaks into the brain.

Blood leaks are abundant in the brain and spinal cord of multiple sclerosis patients, and are monitored with brain scans to establish a diagnosis for the disease. Akassoglou and her team previously showed that, in multiple sclerosis, fibrinogen leaking into the brain causes inflammation and loss of neurons, and blocks myelin repair.

In this study, the researchers wanted to understand how to overcome fibrinogen’s harmful effect. In collaboration with Mark H. Ellisman, PhD, director of the National Center for Microscopy and Imaging Research (NCMIR) at UC San Diego, they developed an advanced microscopy technique that allows them to combine the high-resolving power and advanced 3D-imaging capabilities of electron microscopy with light optics–based imaging inside a living mouse’s spinal cord. 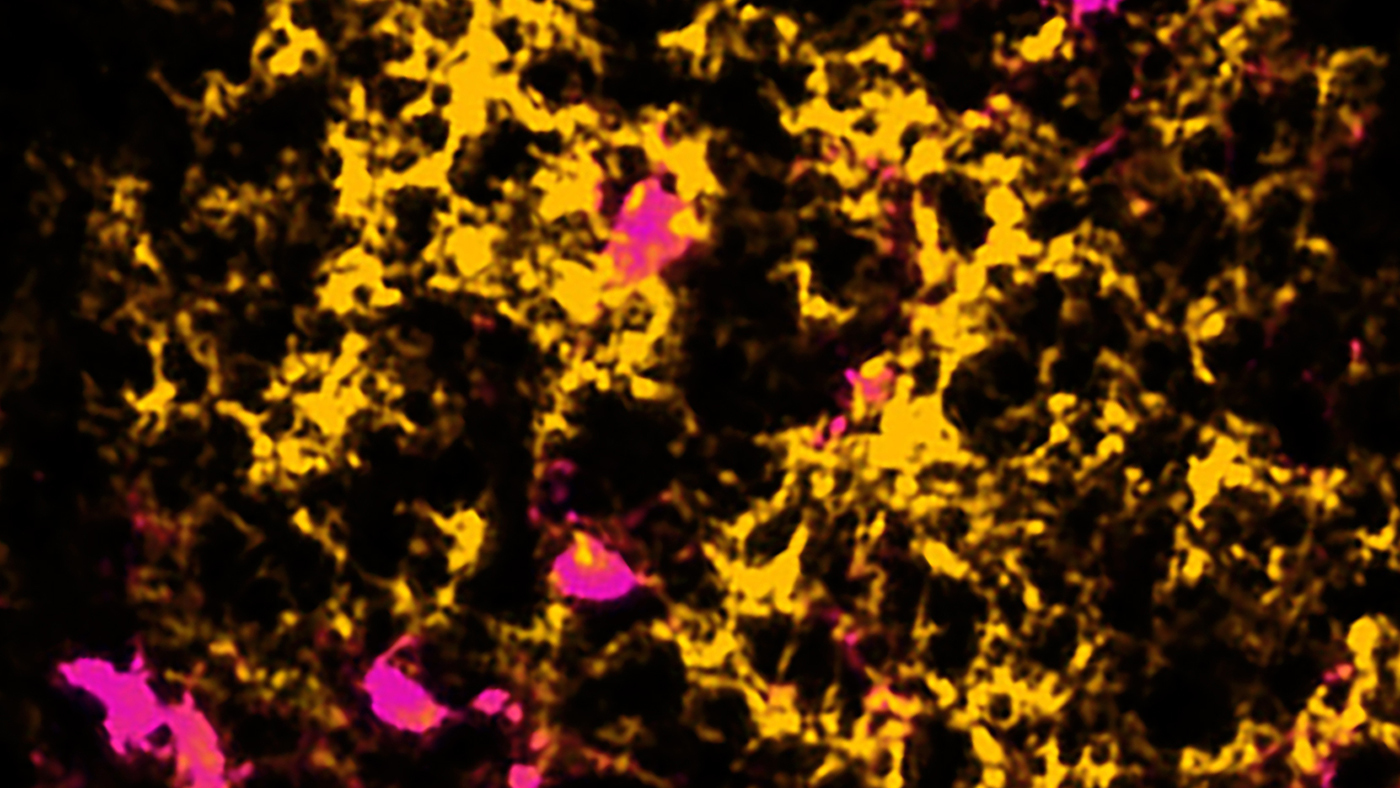 “We can image blood leaks and track repair cells in real-time, visualizing the structure of myelin at exactly the same sites, all in the same specimen,” says Reshmi Tognatta, PhD, a scientist in Akassoglou’s lab and one of the first authors of the study.

The researchers found that, in mouse models of multiple sclerosis, the repair cells were clustering at sites of blood leaks in the brain, where fibrinogen is present. But instead of transforming into myelin-producing cells, they transformed into astrocytes, a type of cell that produces scar tissue.

“We now understand that fibrinogen blocks the production of myelin by causing a chain of events that prevents the repair cells from transforming into myelin producers, forcing them instead to turn into cells that can make scar tissue,” says Tognatta. “Fibrinogen determines the cells’ fate.”

The team decided to test whether the clinical trial drugs could overcome the detrimental effect caused by fibrinogen. To do so, they developed a new method to screen the drugs in the presence of fibrinogen, mimicking the inhibitory environment around the repair cells. The new assay was designed to test not only the production of new myelin, but also the formation of damaging cells in brain lesions.

“Fibrinogen puts repair cells on a derailed path, stopping myelin production,” says Akassoglou. “We can now screen, in a single assay, the efficacy of drugs to put the cells back on track for myelin repair. Our new assay is ideal for the discovery of drugs that overcome the toxic lesion environment.”

The scientists showed that while the trial drugs may increase myelin repair in a normal environment, they were not effective when fibrinogen was present.

“None of the drugs we tested could reverse the effect of fibrinogen,” says the other first author of the study, Mark Petersen, MD, a visiting scientist in Akassoglou’s lab and an associate professor of neonatology at UCSF.

The team then tested other compounds to see if any of them could increase the production of myelin even in the presence of fibrinogen. They identified one small molecule that could not only make the repair cells turn into myelin-producing oligodendrocytes, but could also stop them from becoming scar-producing astrocytes. They treated two different mouse models of multiple sclerosis with this compound, and discovered that it increased the production of myelin and prevented paralysis in these mice. 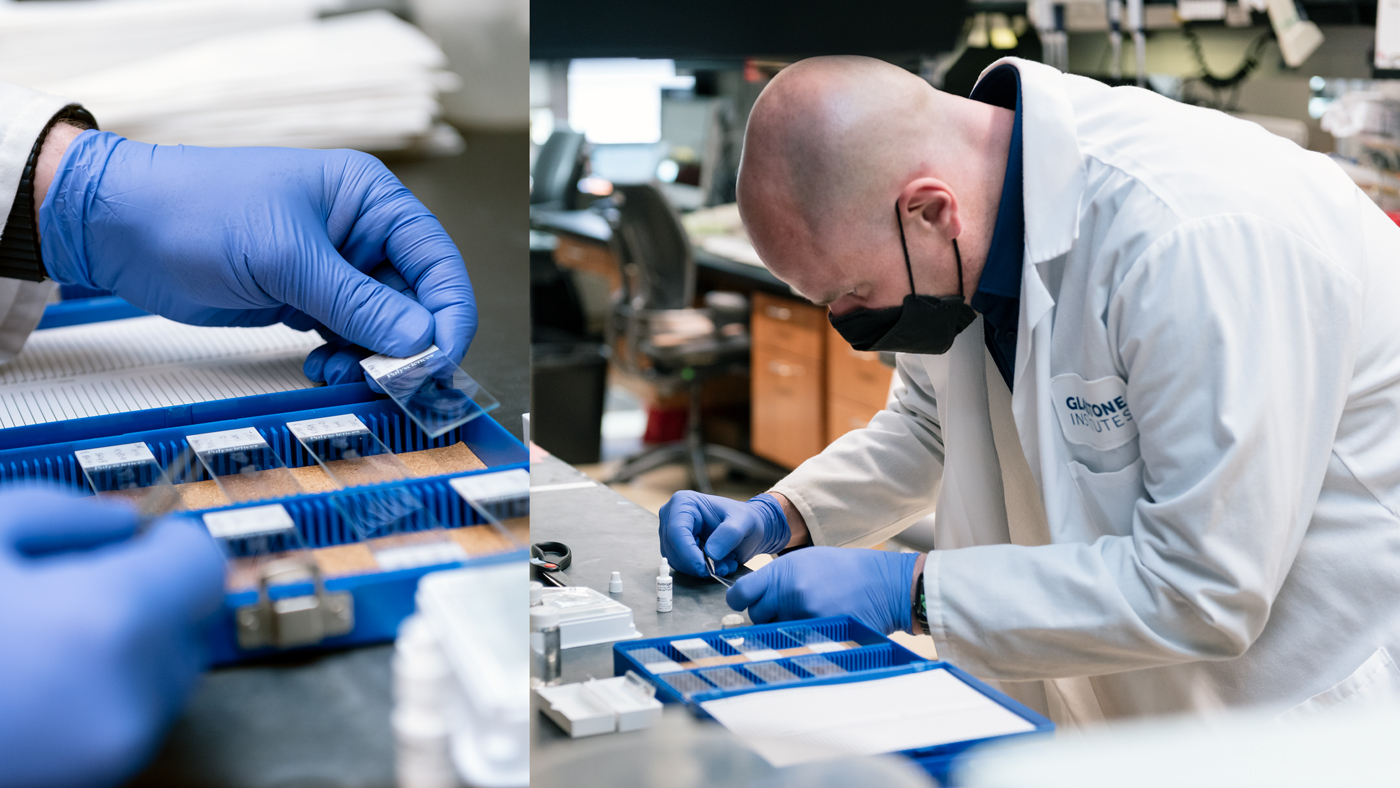 The researchers identified a small molecule that could help patients with multiple sclerosis by boosting the production of myelin in the presence of toxic blood leaks in the brain. Photo: Mark Petersen working in the lab.

“This compound completely overcame the effect of fibrinogen and restored myelin repair around leaky blood vessels,” says Petersen. “Even if the treatment started after they were already sick, the mice improved and we saw signs that the myelin was repairing faster and there was less damage to their nervous system.”

Similar compounds to the one used by the scientists are being tested in clinical trials for other indications, and so far, they appear to be safe. These compounds could potentially be repurposed and tested in multiple sclerosis patients much sooner than new drugs that still must go through an extensive development process.

The small molecule identified by Gladstone researchers could be combined with other available drugs to help better repair myelin. The team’s findings could also provide clinicians with a new option to enhance the production of myelin in the presence of a leaky blood-brain barrier in multiple sclerosis.

And, beyond those diagnosed with multiple sclerosis, the study could help a much larger group of patients with other diseases.

“The disruption of blood vessels and deposits of fibrinogen link many neurological diseases, from multiple sclerosis to neonatal brain injury—so a discovery in one area gives us a lot of insight into other disease processes,” says Petersen, who takes care of infants in the intensive care nursery. “I’m now applying our findings and the tools we developed to the study of the developing brain.”

“It’s crucial to take into account the blood leaks in the diseased brain in order to design treatments that can benefit a broad set of patients,” says Akassoglou. “We discovered that fibrinogen gains access to the diseased brain, acting as a gas pedal for toxic inflammation and as a break for repair. We are continuing to investigate its deleterious effects in the brain in hopes that we can develop effective therapies for multiple sclerosis and other devastating neurological diseases.”

“Identifying and blocking the mechanisms by which fibrinogen contributes to major diseases of the brain and spinal cord is an important objective for us and the field at large,” says Lennart Mucke, MD, director of the Gladstone Institute of Neurological Disease. “Dr. Akassoglou’s research program has pioneered this mission and—through this groundbreaking study—has opened new avenues for the development of urgently needed novel therapeutics.”

The paper “BMP receptor blockade overcomes extrinsic inhibition of remyelination and restores neurovascular homeostasis” was published by the journal Brain on August 24, 2021.