Alzheimer’s disease is a progressive neurodegenerative disease that causes loss of memory. Despite decades of research into how the disease causes brain cells to die, there is no cure.

Researchers at Gladstone Institutes are doing just that. A team led by Senior Investigator Katerina Akassoglou, PhD, was recently awarded over $4.5 million from the National Institutes of Health (NIH) to study how dysfunction of blood vessels in the brain (the neurovascular system) can lead to neurodegeneration.

“There is an emerging interest in the contribution of vascular dysfunction to Alzheimer’s disease. We know that in Alzheimer’s disease, changes to blood vessels in the brain occur really early, and they correlate and often precede dementia,” explained Akassoglou, who is also a professor of neurology at UC San Francisco.

However, whether and how this vascular dysfunction causes cognitive decline remains a mystery.

Akassoglou and her team previously showed that one consequence of vascular dysfunction is that proteins normally found in the blood can leak into the brain due to a compromised blood-brain barrier. Specifically, their research pinpointed a damaging effect of fibrinogen, a blood protein important for clotting, that is deposited in the brains of Alzheimer’s disease patients. When fibrinogen escapes the blood vessels and enters the brain, it can activate the brain’s immune cells and trigger them to destroy important connections between neurons, hastening the loss of synapses and entire nerve cells.

Another finding that has emerged from recent research is that the activity of neurons—the rate and rhythm with which they fire—is altered in the brains of Alzheimer’s disease patients. Research from Gladstone investigators Jorge Palop, PhD, and Lennart Mucke, MD, has shown that these changes to neuronal activity can occur decades before the onset of Alzheimer’s symptoms. Alzheimer’s-associated changes in neuronal activity also include seizures. 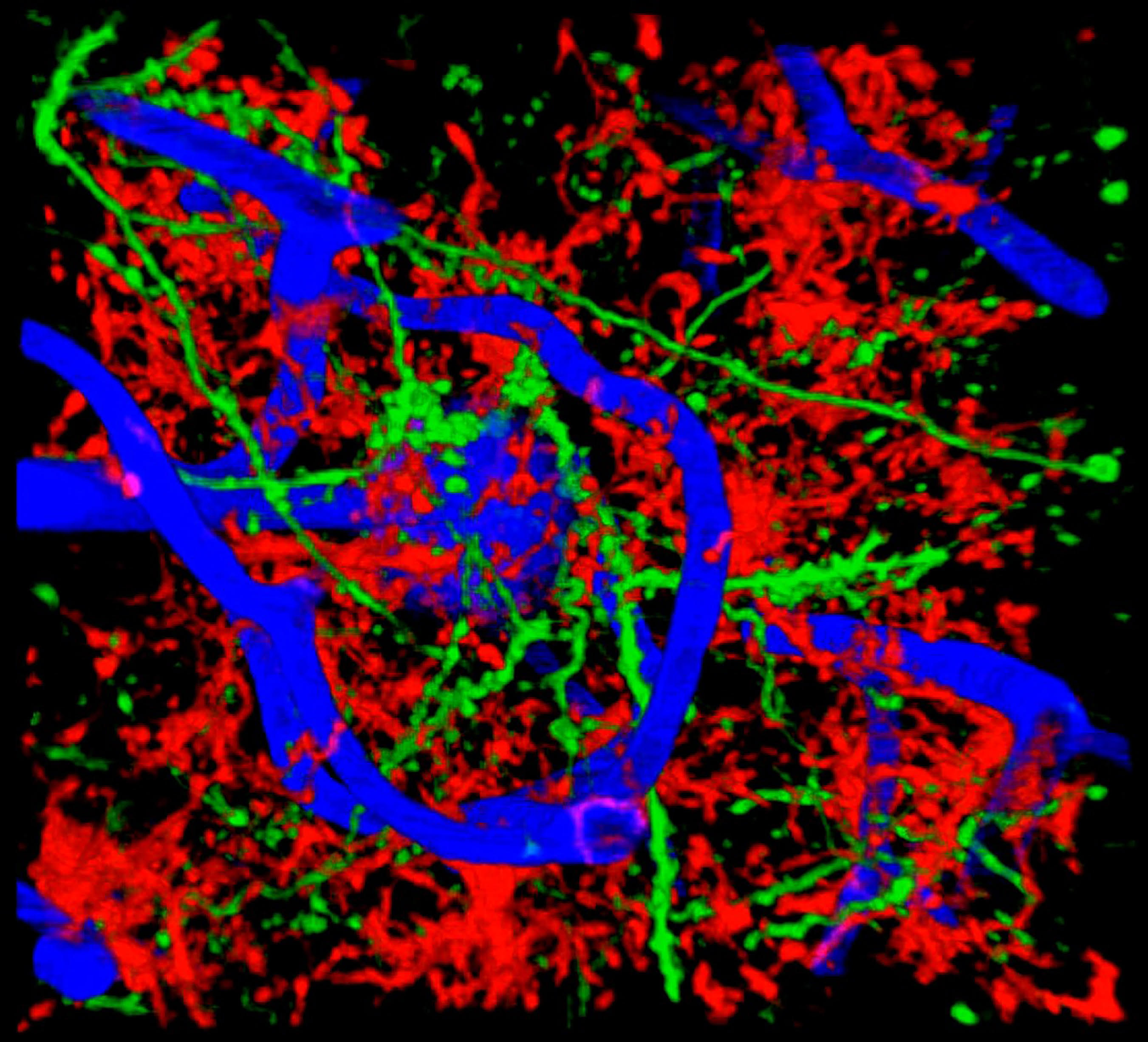 This new NIH grant will support Akassoglou, Palop, and a third collaborator, Mark Ellisman, at UC San Diego, as they join forces to investigate whether these two aspects of Alzheimer’s disease—vascular dysfunction and excessive neuronal activity—are related, and whether blocking one can prevent the other.

“How dysfunction of the vascular and immune systems alters ongoing neuronal activity is a critical question in the study of Alzheimer’s disease,” said Palop. “We can record brain electrical activity in a mouse for weeks at a time and observe how vascular damage affects neuronal function.”

“We know that the vascular alterations and blood leaks are present in Alzheimer’s disease, but we do not know how they affect neuronal activity.” said Akassoglou. “Connecting the dots between blood leaks, the brain’s immune cells, and neuronal activity could change the way we think how cognitive decline develops and be the cornerstone for developing new treatments.”

The project builds on a long-running collaboration between Akassoglou and Ellisman, a distinguished professor at UC San Diego School of Medicine and an expert in multiscale microscopy. Ellisman is the director of the National Center for Microscopy and Imaging Research, and is a pioneer in the development of 3-dimensional light and electron microscopy applied to the study of the structure and function of normal and abnormal nervous systems.

By combining state-of-the-art imaging techniques with recordings of neuronal activity, the researchers hope to discover the series of events that lead to cognitive decline in Alzheimer’s disease. They also hope to identify new therapeutic targets that might prevent this process.

“It’s critical to understand the relationships between vascular, neuronal, and immune dysfunctions,” said Lennart Mucke, director of the Gladstone Institute of Neurological Disease. “This work and related studies by other groups in our institute will be invaluable in the design of novel therapies for Alzheimer’s disease and a range of other impactful brain disorders.”