Normally, the blood protein fibrin does not enter the brain. But in several neurological disorders, the blood-brain barrier—which keeps large molecules in the blood from entering the brain—becomes abnormally permeable, allowing fibrin to leak into the brain and trigger inflammation. Emerging evidence points to a leaky blood-brain barrier as an early event in brain diseases that causes neurodegeneration. In fact, this process may lead to the death of nerve cells in multiple sclerosis, Alzheimer’s disease, and other disorders.

Until now, however, treatments to inhibit the blood from harming the brain were not available. Although studies in patients with multiple sclerosis or Alzheimer’s disease (and in related animal models) indicate that fibrin may play a role in promoting these disorders, most researchers have shied away from targeting fibrin to treat neurological diseases because of concerns that targeting the protein would impair its beneficial role in blood clotting, which prevents excessive bleeding after injuries.

Scientists from Gladstone Institutes may have overcome this challenge with a new immunotherapy. A team led by Senior Investigator Katerina Akassoglou, PhD, developed an antibody that blocks the inflammatory and oxidative activity of fibrin, which contributes to neurodegeneration in the brain, without compromising the protein’s clotting function. 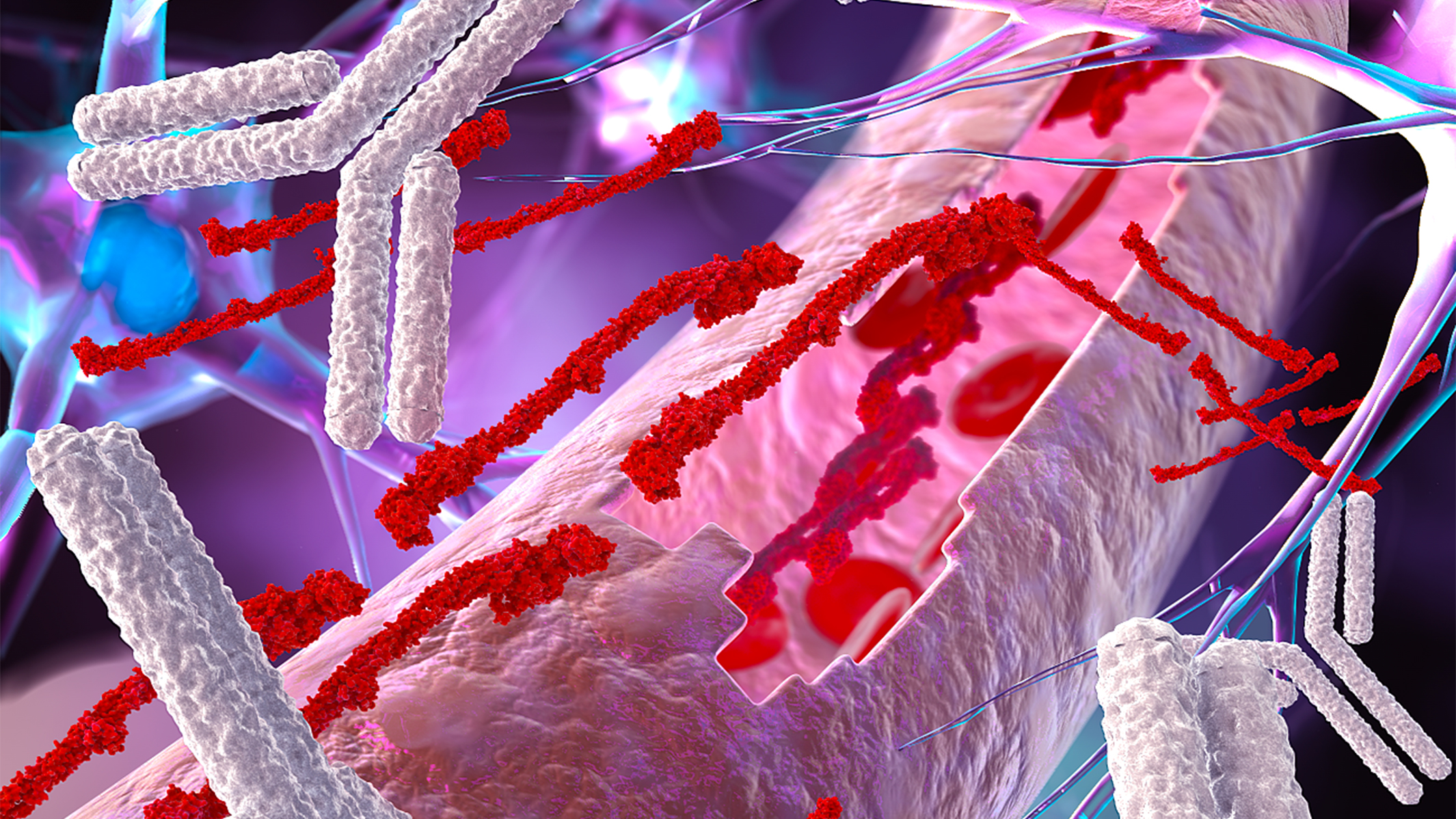 In this image, a leaky brain blood vessel exposes the brain to the blood clotting factor fibrinogen creating a toxic environment for brain cells. Gladstone researchers have developed a new antibody to target these toxic blood leaks in the brain and protect against neurodegeneration. [Image: Ella Maru Studio]

To come up with a very precise and highly effective antibody, the researchers focused on targeting only a small region of the fibrin protein that is involved in activating the immune system in the brain. This way, they avoided interfering with the part of the protein responsible for clotting.

“We have developed a monoclonal antibody to target a major culprit in the blood that damages the brain,” said Akassoglou, who is also a professor in the Department of Neurology at UC San Francisco. “Fibrin-targeting immunotherapy could protect the brain from the toxic effects of blood leakage and may also have beneficial effects in other organs affected by inflammatory conditions with vascular damage.”

For their new study, published online on October 15 in the journal Nature Immunology, Akassoglou and her colleagues used models of neurodegeneration simulating two major brain diseases that are associated with blood-brain barrier leakage, chronic inflammation, and vascular abnormalities: multiple sclerosis and Alzheimer’s disease.

The therapeutic fibrin antibody entered the brain, accumulated at fibrin-rich areas, and protected against neuroinflammation and neurodegeneration in both disease models. Molecular analysis showed that the treatment also reduced activation of biochemical pathways that contribute to inflammation and oxidative stress, a potential source of molecules that can poison cells, including neurons.

“We discovered that fibrin also contributes to brain disease through oxidative stress—an unanticipated result,” explained first author Jae Kyu Ryu, PhD, a staff research scientist on Akassoglou’s team. “Treatment with the antibody put a damper on this fibrin-driven oxidative mechanism, which may contribute to many different neurodegenerative diseases.”

In the mouse model of Alzheimer’s disease, animals were treated with the antibody after they had already developed accumulations of amyloid proteins in the brain, a hallmark of the disease. Compared to placebo-treated mice, the treated mice had less brain inflammation and lost fewer neurons.

“Our study supports that vascular damage leading to immune-driven neurodegeneration may be a common thread between diseases of different etiologies with blood-brain barrier leaks,” said Akassoglou. “Targeting fibrin with immunotherapy is a new approach that could be used to test the therapeutic benefits of suppressing this pathogenic mechanism in multiple disease contexts.”

Using this approach, Akassoglou and her team could be in a position to achieve neuroprotection in diverse disorders without shutting down protective immune responses or blood clotting.

The next step will be to make a version of the antibody that can be used in human patients. Given that the treatment targets an immune response and a blood clotting factor, Akassoglou cautions, however, that tests monitoring the immune system and blood clotting will be important during clinical evaluation.