Katerina Akassoglou and her team have discovered new mechanisms that control the communication between the brain, the immune system, and the vascular system, and designed novel therapies for neurological diseases. Akassoglou’s lab pioneered studies showing that when the blood-brain barrier is disrupted, the blood-clotting factor fibrinogen can leak into the brain, where it induces neurodegeneration. Their findings indicate that fibrinogen leakage could contribute to a wide range of neurological conditions, including multiple sclerosis, Alzheimer’s disease, traumatic brain injury, and stroke. 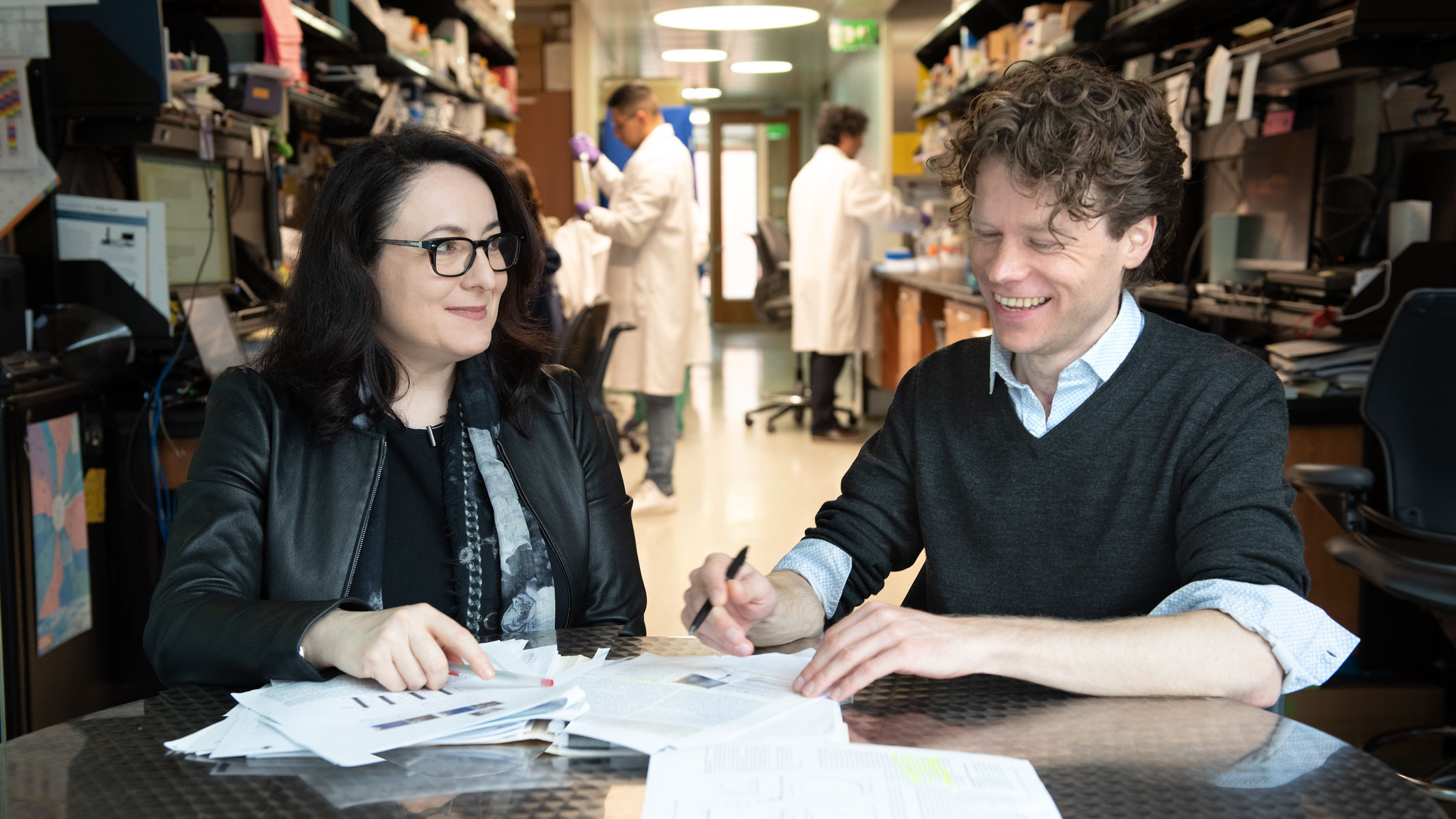 Work from Akassoglou’s lab has led to a new way of thinking about neurological diseases by proposing a fundamental mechanism through which cerebrovascular dysfunction impairs the brain and spinal cord. Specifically, they demonstrated that the neurovascular interface is fundamentally changed in neurological disease, resulting in increased blood-brain barrier permeability that promotes toxic brain inflammation. They identified the blood clotting factor fibrinogen as a common driver for neuroinflammation and neurodegeneration and inhibitor of neurorepair. They developed the first immunotherapy that blocks the deleterious functions of fibrin and protects from neuroinflammation and neurodegeneration in animal models of multiple sclerosis and Alzheimer’s disease. Therefore, the team’s research has broad impact on the understanding of and ability to treat multiple neurological diseases, including multiple sclerosis, stroke, epilepsy, traumatic brain injury, and spinal cord injury.

Akassoglou’s team continues to investigate the mechanisms at the neurovascular interface that promote neuroinflammation, neurodegeneration, and cognitive decline. They hope to use their discoveries to develop innovative treatments, and fluid and imaging biomarkers for devastating neurological diseases.

Katerina Akassoglou, PhD, is a senior investigator and director of the Gladstone UCSF Center for Neurovascular Brain Immunology. She is also a professor of neurology at UC San Francisco.

A native of Greece, Akassoglou earned both a bachelor's of science in biology and a PhD in neuroimmunology at the University of Athens, Greece with training in neuropathology by Hans Lassmann at the University of Vienna. Akassoglou completed her postdoctoral work at the State University of New York at Stony Brook, Rockefeller University with Sid Strickland, and at New York University with Moses Chao. Prior to joining Gladstone in 2008, she was an assistant professor of Pharmacology at UC San Diego. She has led multiple international collaborations between academia and pharma, and has given over 200 lectures nationally and internationally. She is active in several scientific organizations, editorial boards, and funding agencies, has published over 100 papers, and is a named inventor on 20 patents and patent applications. She is the scientific founder and Board Director of the VC-backed university spin-out Therini Bio. She has received several awards including the Presidential Early Career Award for Scientists and Engineers by The White House, the highest honor bestowed by the US government on outstanding scientists and engineers beginning their independent careers, the John J. Abel Award, the R35 Research Program Award by NINDS, and the Barancik Prize for Innovation in MS research. Dr. Akassoglou is a Fellow of the American Neurological Association (ANA), elected Fellow of the National Academy of Inventors (NAI) and Lifetime Fellow of the American Association for the Advancement of Science (AAAS). She was named by the San Francisco Business Times among the 2021 Most Influential Women in Bay Area Business.

“I was inspired by my biology high school teacher. She helped me get a summer internship in an immunology lab and I never looked back.”

2022 Lifetime Fellow, American Association for the Advancement of Sciences (AAAS)

2007 The Dana Award in Brain and Immunoimaging