The genome of human cells looks a lot like a tangled ball of yarn, with tightly wound clumps from which myriad loose strands escape and loop out. But there is order to this tangle, and growing evidence that the genome’s 3D architecture influences the activity of its genes.

Understanding the rules that control gene activity has been the object of a long collaboration between Gladstone Investigators Deepak Srivastava, MD, Benoit Bruneau, PhD, Katherine Pollard, PhD, Bruce Conklin, MD, and Nevan Krogan, PhD, and their UC San Francisco (UCSF) partner Brian Black. Together, they have already found many key regulators of gene activity in the heart.

Now, their collaboration has received a strong shot in the arm from the National Institute of Health with the recent award of a Program Project Grant totaling $13 million between the labs for the next 5 years.

With this new support, the researchers will carry out a comprehensive probe into gene activity in heart cells and its intersection with the genome’s 3D organization during heart formation.

“It is truly gratifying to see our long collaboration supported in this way by the National Institute of Health,” says Srivastava, president of Gladstone Institutes and project leader on this multi-investigator grant. “This funding will allow us to dig deep into processes that are fundamental to heart cell biology, but that will also directly inform our efforts to design therapies for congenital heart disease, heart failure, and other heart diseases.”

Heart failure is the most common cause of death in adults, and congenital heart defects the most common form of birth defects. These defects have been traced to mutations in a number of proteins that regulate gene activity in heart cells, including the proteins at the core of the researchers’ new proposal.

“However, the investigation of the 3D organization of the genome is a relatively new area, particularly in the heart,” says Srivastava, who is also a pediatric cardiologist and has devoted much of his career to understanding heart formation and congenital heart defects.

The work outlined in this grant is therefore expected to yield novel insight into heart disease and spur the design of new therapies. It will also help the researchers improve their ability to coax human cells into becoming various types of heart cells. This technology could eventually be used to regenerate failing heart tissue. 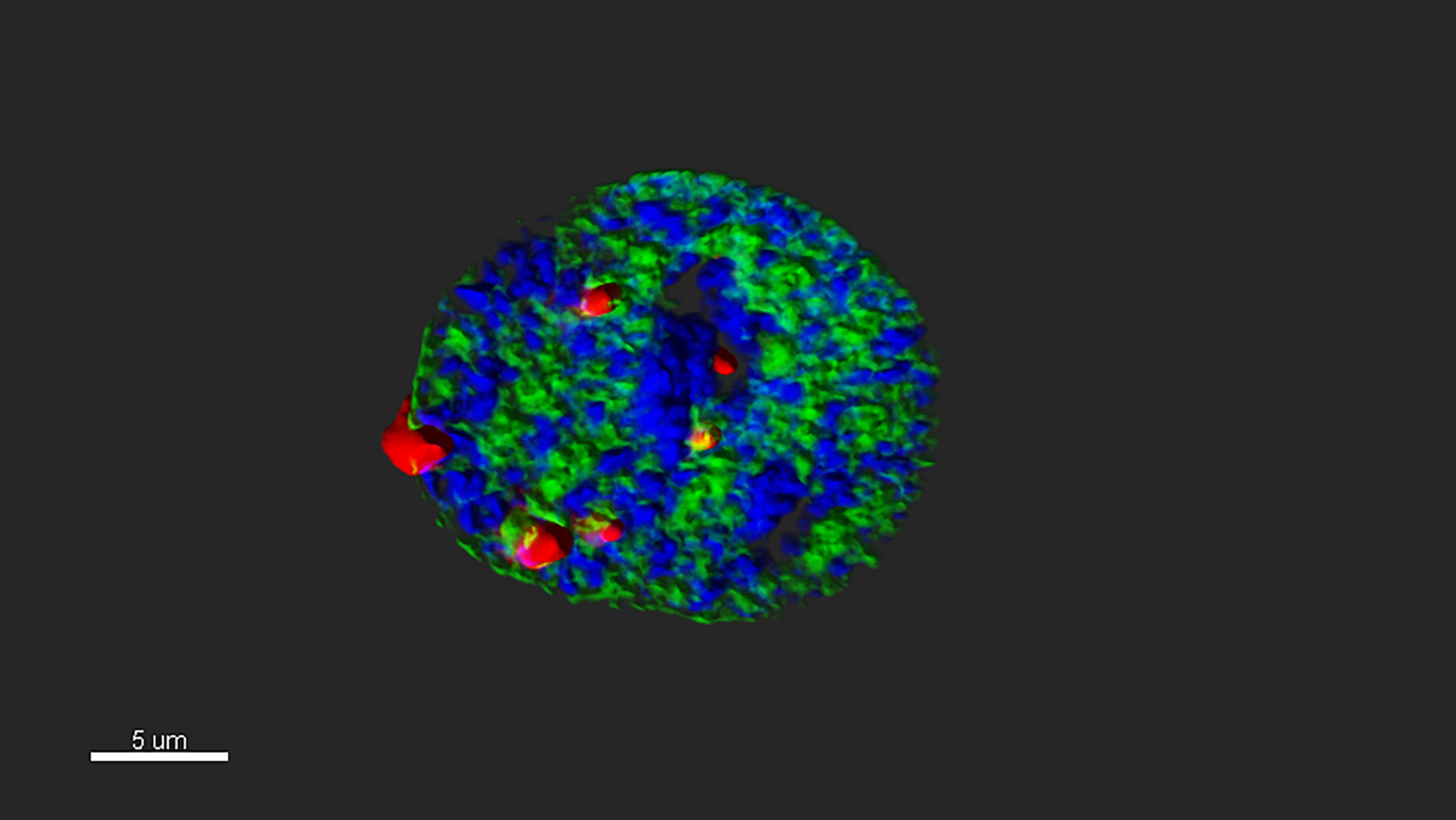 The nucleus of a young heart cell, stained to reveal the genome in blue and a protein of the nuclear envelope in green. Red dots mark spots where two nuclear proteins of interest come into close contact.

The researchers’ plan is to correlate gene activity and genome organization at the whole-genome scale and during multiple stages of heart formation. This will require enormous technological power. It will also require massive computing power and statistical analysis to store and sift through the large data sets the group will generate.

But the team is well positioned to take on this challenge.

“Our studies are facilitated by extraordinary new technology,” says Bruneau, also a cardiovascular development specialist and the director of the Gladstone Institute of Cardiovascular Disease.

The $13 million proposal will leverage Srivastava, Bruneau, and Black’s deep understanding of heart development and disease, and enlist the state-of-the-art technologies and analytic tools that Pollard and Krogan have developed to collect and analyze information about biological networks on a grand scale.

“Our team combines a remarkable array of expertise and technologies,” says Srivastava, who is also director of the Roddenberry Stem Cell Center at Gladstone. “It would be impossible for any one or two labs in isolation to pursue the complex goals we set out to achieve with this project.”

The project focuses on a small set of proteins the team has previously shown to be crucial for the formation of a functional heart. These proteins, known as transcription factors, activate or silence genes by binding to specific DNA sequences in the genes’ vicinity.

The scientists have shown that cardiac transcription factors can associate with each other and with other proteins. “Depending on the associations they form, they turn genes on, off, or somewhere in-between, and different types of heart cells may form,” says Black.

Bruneau’s team studies proteins that modulate the accessibility of DNA sequences along the genome, a process known as chromatin remodeling. These proteins unspool segments of the genome from the tightly wound coils, opening up stretches of DNA that transcription factors can bind.

Like transcription factors, chromatin remodeling proteins associate with each other and with other proteins, forming associations that vary depending on the cell type or the stage of heart formation.

Interestingly, Srivastava’s group recently discovered that cardiac transcription factors may have long-range effects on the 3D organization of the genome. The genome is housed in a separate compartment of the cell, a spherical structure called the nucleus. Srivastava’s team found that cardiac transcription factors may pull genome loops all the way to proteins lining the edges of the nucleus.

The picture that emerges from these findings is that of a vast network of proteins that coordinate gene activity and genome architecture, and change as the heart forms.

Now the researchers want to know how these networks form, how many proteins they entail, and what genes they affect.

To answer these questions, the team will analyze the associations between cardiac transcription factors, chromatin remodeling proteins, and their various partners during heart development. They will pair this analysis with a genome-wide survey of the genes these proteins target and of these genes’ activity.

“Our overarching goal is to understand all the levels of gene regulation in developing hearts, from genes and transcription factors to chromatin remodeling and to genome organization within the nucleus,” says Bruneau, who is also a professor of pediatrics at UCSF.

The researchers will use a battery of sophisticated techniques to capture the complexes that proteins form with each other or with DNA sequences, and to record which genes are active or inactive in different types of heart cells.

They will leverage various models of heart development, including human induced pluripotent stem cells (hiPS cells) that can give rise to heart tissue in the dish, or cells from the developing heart of mouse embryos. They will also use CRISPR technology and other genetic tools to insert mutations in heart cells and evaluate the impact of these mutations on the protein-genome networks.

Their success will depend on high-throughput data collection and analysis, and powerful statistics to guarantee the validity of the findings. That’s where Krogan and Pollard come in. 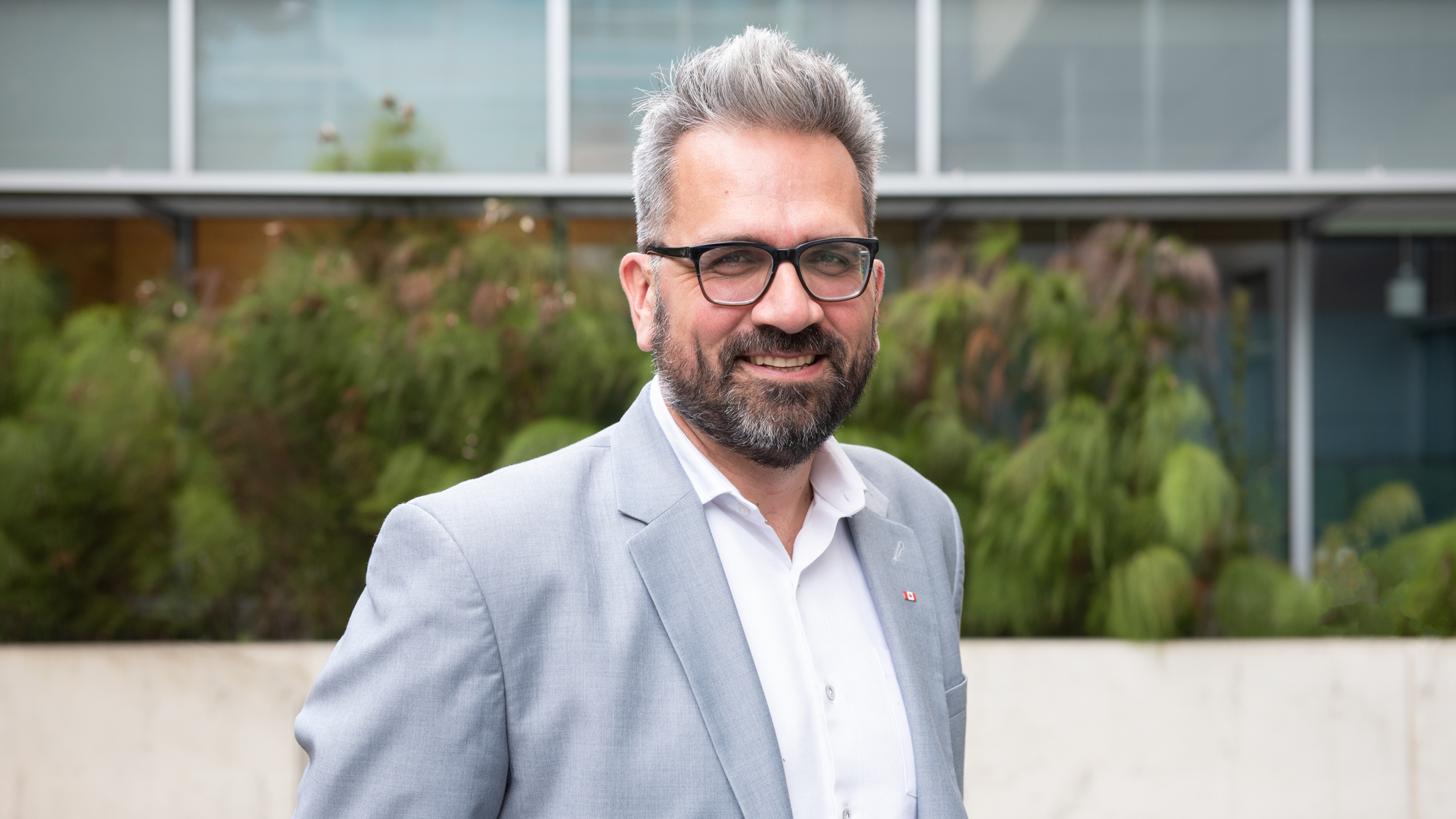 Krogan’s lab will contribute technology his lab developed to determine how proteins interact with one another in the cell, and how those interactions affect the interaction of proteins with DNA.

Pollard’s group will devise statistical methods to rigorously analyze the protein networks and gene activity profiles the researchers uncover through the lens of genetic causes of heart disease.

“The biggest challenge will be to develop novel computational methods, including artificial intelligence tools,” says Pollard, who directs the Gladstone Institute for Data Science and Biotechnology. “This is the first time that scientists will integrate such diverse kinds of data to understand a disease.”

Together, these tools will allow the researchers to reliably identify connections between protein networks and gene activity at all stages of heart formation, in the context of disease or healthy heart formation.

“This project crystallizes a more than a decade-long collaboration across our labs, with a laser focus on fundamental concepts of gene regulation,” says Bruneau.

“We will learn how these concepts apply to the heart and to heart diseases,” he adds, “but we think they will also be relevant to other organs and sets of diseases."