Nadia Roan (right) and her team—including Guorui Xie (left)—have identified the blood cells that are most susceptible to HIV infection.

In the 40-some years since the beginning of the HIV/AIDS epidemic, scientists have learned a lot about the virus, the disease, and ways to treat it. But one thing they still don’t completely understand is which exact cells are most susceptible to HIV infection.

Without this knowledge, it is difficult to envision targeting these cells to protect the millions of people who encounter the virus for the first time every year, or the infected people in which infection will likely rebound if they go off therapy.

Scientists have known for a long time that the virus homes in on so-called memory CD4+ T cells, a type of cell that helps the human body build lasting immunity against pathogens. But that is still too broad a category to target for therapy.

“CD4+ T cells orchestrate the immune response against all kinds of pathogens, so you can’t just eliminate them to prevent HIV infections,” says Gladstone Associate Investigator Nadia Roan, PhD. “But if you can find the more specific subsets of CD4+ T cells that are highly susceptible to HIV infection, you may be able to specifically target those cells without detrimental side effects.”

Much knowledge about HIV infection comes from in vitro experiments (in a petri dish), where scientists expose CD4+ T cells cultured in the lab to the virus. These cell cultures are not a perfect model for the human body’s complex ecosystems in which infection normally takes place. Might in vitro infection yield a skewed view of the virus’s preference?

To answer this question, Roan and her team compared CD4+ T cells infected in vitro to the CD4+ T cells circulating in the blood of 11 individuals at various stages of infection. Some blood samples were taken before the donors had started treatment with antiretroviral therapy, some after. Yet others came from individuals who had stopped their treatment and were experiencing new rounds of infection.

Using technology they have honed over the years, the researchers established a detailed atlas of the CD4+ T cells in individuals not on antiretroviral treatment, which they have now published in the scientific journal Cell Reports. 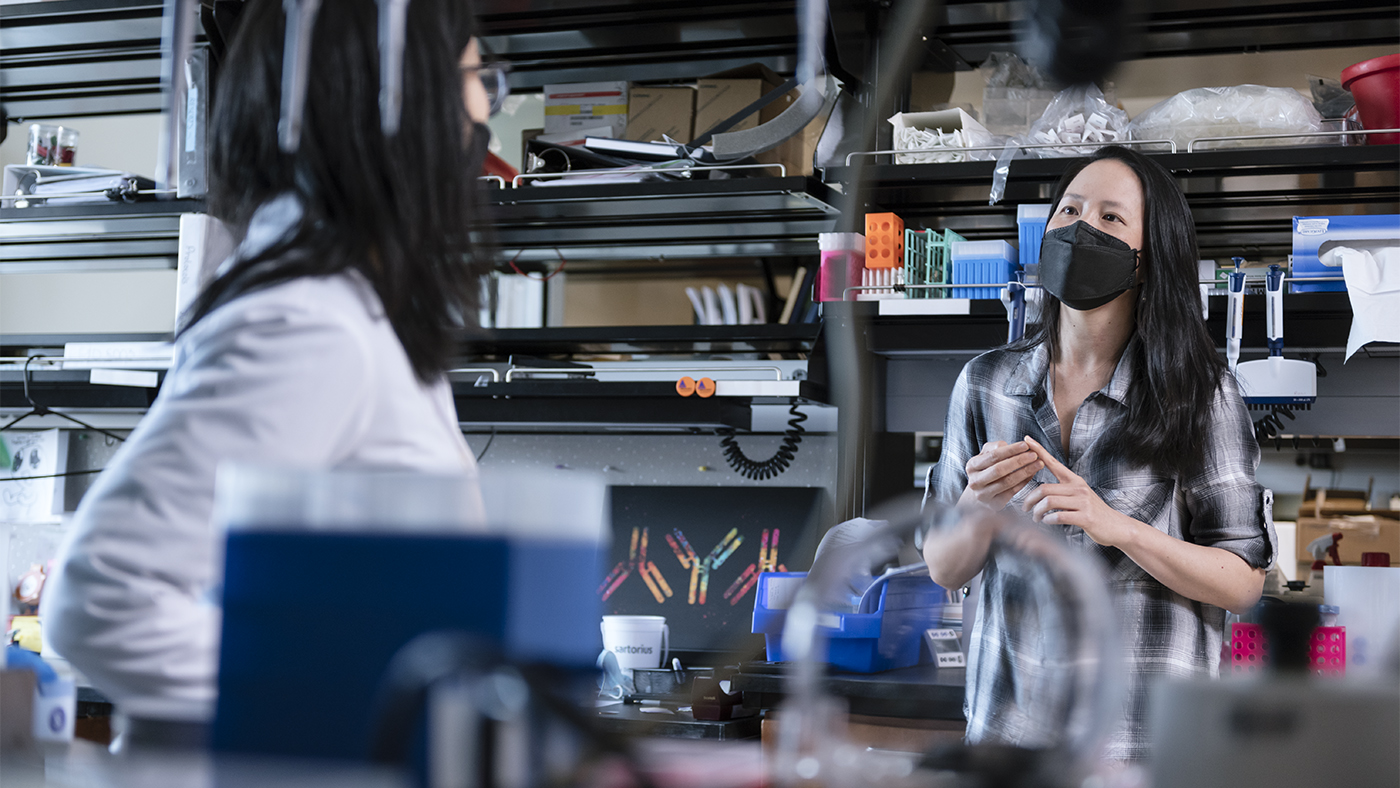 Roan hopes to uncover new insights into HIV infection to eventually help identify new approaches for the prevention of HIV/AIDS.

“Our work affords novel insight into the basics of how HIV behaves in the human body, rather than just in a lab dish,” says Roan, who is also an associate professor of urology at UC San Francisco. “It informs our understanding of what really happens during an active infection, which is interesting in its own right. Moreover, we know that some infected cells become reservoirs of latent virus, so our work could help us better understand how the reservoir forms during an infection.”

The technology Roan and her team deployed, called CyTOF/PP-SLIDE, distinguishes cells with exquisite precision based on the proteins they contain or carry on their surface. With this information, the scientists can classify CD4+ T cells into myriad subsets, and then determine whether some subsets are more susceptible to infection than others.

A crucial perk of this technology is that it can trace infected cells back to their original state prior to infection.

“That’s important,” says Guorui Xie, PhD, a postdoctoral researcher in Roan’s lab and the first author of the study. “We know that when HIV infects cells, it remodels the cells such that they no longer contain the exact same levels of proteins as they did before infection. With CyTOF/PP-SLIDE, we can identify the uninfected cells that most closely match the infected ones in the same patient. These uninfected cells can give us important information about what the cells targeted by HIV resembled before the virus remodeled them.” 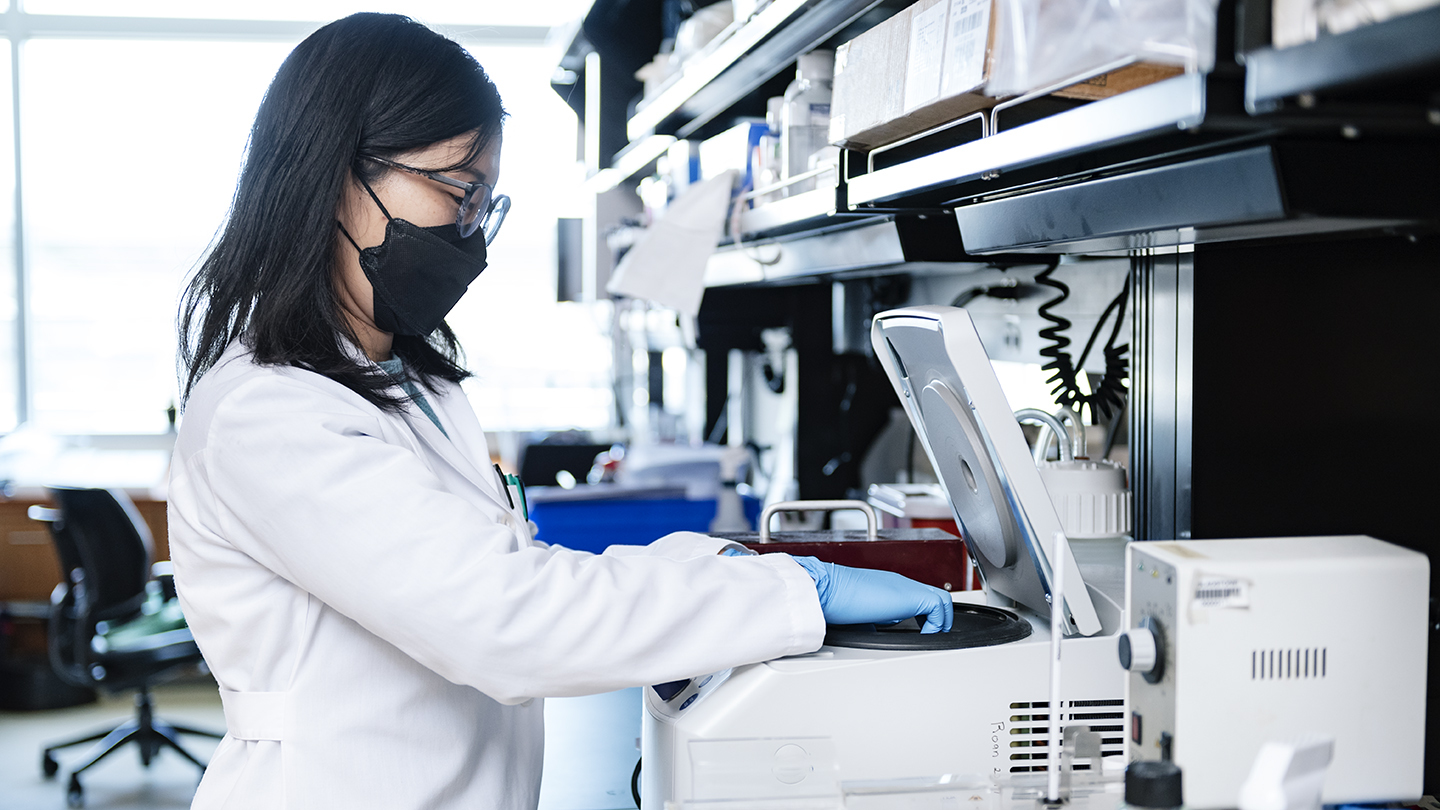 Xie is tracing HIV-infected cells back to their original state prior to infection to better understand how the virus behaves in the human body.

Roan’s team found that remodeling was indeed extensive in blood CD4+ T cells infected in vivo (in people) as well as in vitro. In the process, they made a surprising finding about one of HIV’s preferred targets. Prior studies have suggested that HIV prefers to infect a subtype of CD4+ T cells, called Tfh, and Roan’s team confirmed these cells to be susceptible to HIV. However, they also discovered that the virus can infect non-Tfh cells and remodel them such that they adopt features of Tfh cells.

“This result strikes a cautionary note in our field,” says Roan. “You really can’t tell which cells HIV prefers to target simply by looking at infected cells. You need to know what the cells looked like before remodeling.”

The scientists also found that remodeling causes infected blood cells to alter their surface in ways that may change how they move through the body. Roan prudently speculates that this might help the virus steer infected cells toward sites where it can infect even more cells.

“Whatever its exact purpose, remodeling is probably not just a chance event,” adds Roan. “A virus as small as HIV depends crucially on the resources provided by its host to grow and spread. It’s likely that nothing the virus does to its host cell is an accident.”

The profile of HIV’s favorite cells differed somewhat between in vitro and in vivo infections. Nevertheless, the researchers found one subset of cells that was preferentially infected in both cases, and could become a useful model for further lab studies.

The team also confirmed that not all CD4+ T cells are equally susceptible to HIV infection in vivo, which gives them hope that the most susceptible cells could eventually become targets of preventive interventions.

Xie and Roan are now planning to obtain blood samples from more donors to see whether HIV’s targets differ between a first infection and the return of the virus after a lapse in therapy, or between men and women. Ultimately, they would also like to look at in vivo–infected cells from mucosal tissues such as the gut and genital tract, where most HIV infections begin. But these samples are much harder to procure.

In the meantime, the researchers are making public the atlas of all the cells they have analyzed, along with the dozens of proteins they found to be affected in these cells after HIV infection, which they hope will be a valuable resource for the HIV research community.

“There is still much to discover in this atlas that may help uncover new insights into HIV infection and how it develops, and perhaps lead to the identification of new approaches for HIV/AIDS prevention,” says Roan.

The paper “Characterization of HIV-induced remodeling reveals differences in infection susceptibility of memory CD4+ T cell subsets in vivo” was published in Cell Reports on April 27, 2021.