Drs. Nadia Roan and Warner Greene have discovered why microbicides (chemical compounds that can be applied to the female genital tract to protect against STDs) prevent HIV transmission in a petri dish but not in clinical trials. [Photo: Chris Goodfellow]

In the fight against HIV, microbicides—chemical compounds that can be applied topically to the female genital tract to protect against sexually transmitted infections—have been touted as an effective alternative to condoms. However, while these compounds are successful at preventing transmission of the virus in a petri dish, clinical trials using microbicides have largely failed. A new study from the Gladstone Institutes and the University of Ulm now reveals that this discrepancy may be due to the primary mode of transportation of the virus during sexual transmission, semen.

“We think this may be one of the factors explaining why so many drugs that efficiently blocked HIV infection in laboratory experiments did not work in a real world setting,” explains co-first author Nadia Roan, PhD, a visiting scientist at Gladstone and an assistant professor-in-residence in the Department of Urology at the University of California, San Francisco. “We’ve shown previously that semen enhances HIV infection, but this is the first time we’ve shown that this activity markedly reduces the antiviral efficacy of microbicides.” 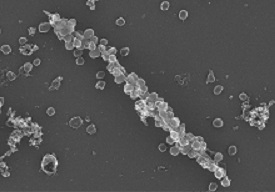 Semen enhances the infectiousness of HIV through the presence of protein aggregates called amyloid fibrils. HIV binds to these fibrils, causing the virus to cluster together and increasing its ability to attach to and infect cells in the host—in this case the sexual partner of the infected individual. This effect is then sufficient to increase the infectiousness of the HIV virus, thereby diminishing the antiviral properties of the microbicides.

In the study, published today in Science Translational Medicine, researchers tested the effectiveness of several different types of microbicides targeting the HIV virus on cells that had been exposed to HIV alone compared with cells that were treated with both HIV and semen. Across the board, they saw that not only did the cells with semen have rates of HIV infection approximately ten-fold higher than normal, these microbicides were up to twenty times less effective at blocking the virus in these cells than in those not exposed to semen.

Senior author Jan Munch, PhD, from the University of Ulm says, “Our findings suggest that targeting amyloids in semen is an alternative strategy to improve drug efficacy. The next step is to create a compound or cocktail of drugs that targets both the HIV virus and these amyloid fragments and to test its effectiveness. Also, given that semen is the main means of transmission of HIV, future testing of microbicides in the lab should be performed in the presence of semen to better predict antiretroviral efficacy in real life.”

To test that it was the HIV-enhancing ability of semen that was having this effect on the microbicides and not some other substance, the researchers repeated the experiments using semen from men whose semen does not enhance HIV infection due to a disorder called ejaculatory duct obstruction. In the presence of these samples, there was no decrease in effectiveness of the anti-viral microbicides, confirming the importance of the HIV-promoting effects of semen in counteracting the effectiveness of these drugs.

Most microbicides work by targeting the virus itself, attempting to break it down or blocking its ability to infect a cell. However, the heightened infectiousness of HIV in the presence of semen appears to over-power any anti-viral effects the microbicides possess. The one exception to this finding is a different type of microbicide that acts on the host cells’ receptors, stopping the virus from latching on from within. In the current study, this microbicide, called Maraviroc, was equally effective in preventing infection both with and without the presence of semen.

“There are important potential clinical implications for this study,” says Warner Greene, MD, PhD, director of the Gladstone Institute of Virology and Immunology and a senior author on the paper. “Microbicides were originally developed as a way to empower and protect women in sub-Saharan Africa who often don’t have a way to negotiate safe sex or condom use. However, the first generation of microbicides were largely ineffective or worse, some even leading to increased transmission of the virus. This study sheds light on why these microbicides did not work, and it provides us with a way to fix this problem by creating a new compound drug combining antivirals and amyloid inhibitors.”

How Close Are We to a Cure for HIV?