Gladstone Institutes and Vir Biotechnology are partnering to enhance a promising avenue of treatment for viral infectious disease. Their collaboration, which was formalized in June 2019, could result in a therapeutic approach that would significantly impair the ability of viruses to develop resistance to treatment, and potentially even treat multiple infections with a single drug.

“We have formed a dedicated team for this effort, and that has tremendously accelerated our progress from identifying targets toward developing actual drugs,” said Ott, who is also a professor of medicine at UC San Francisco (UCSF). “Vir and Gladstone have similar philosophies. We are both interested in host-directed therapies instead of pathogen-directed therapies. Instead of competing or reinventing each other’s technologies, we’re joining forces.”

“We believe that harnessing the power of innate immunity has the potential to open the door to powerful new ways to treat infectious diseases,” said Vir’s Chief Scientific Officer Skip Virgin, MD, PhD. “We are excited to explore this potential and to do so with some of the foremost experts in this area of research at Gladstone.”

Most antiviral drugs are currently pathogen-directed, damaging or disabling one specific type of virus directly. With this approach, it sometimes takes more than one drug to keep a single virus in check. And, crucially, viruses can adapt very fast, developing resistance to such drugs. 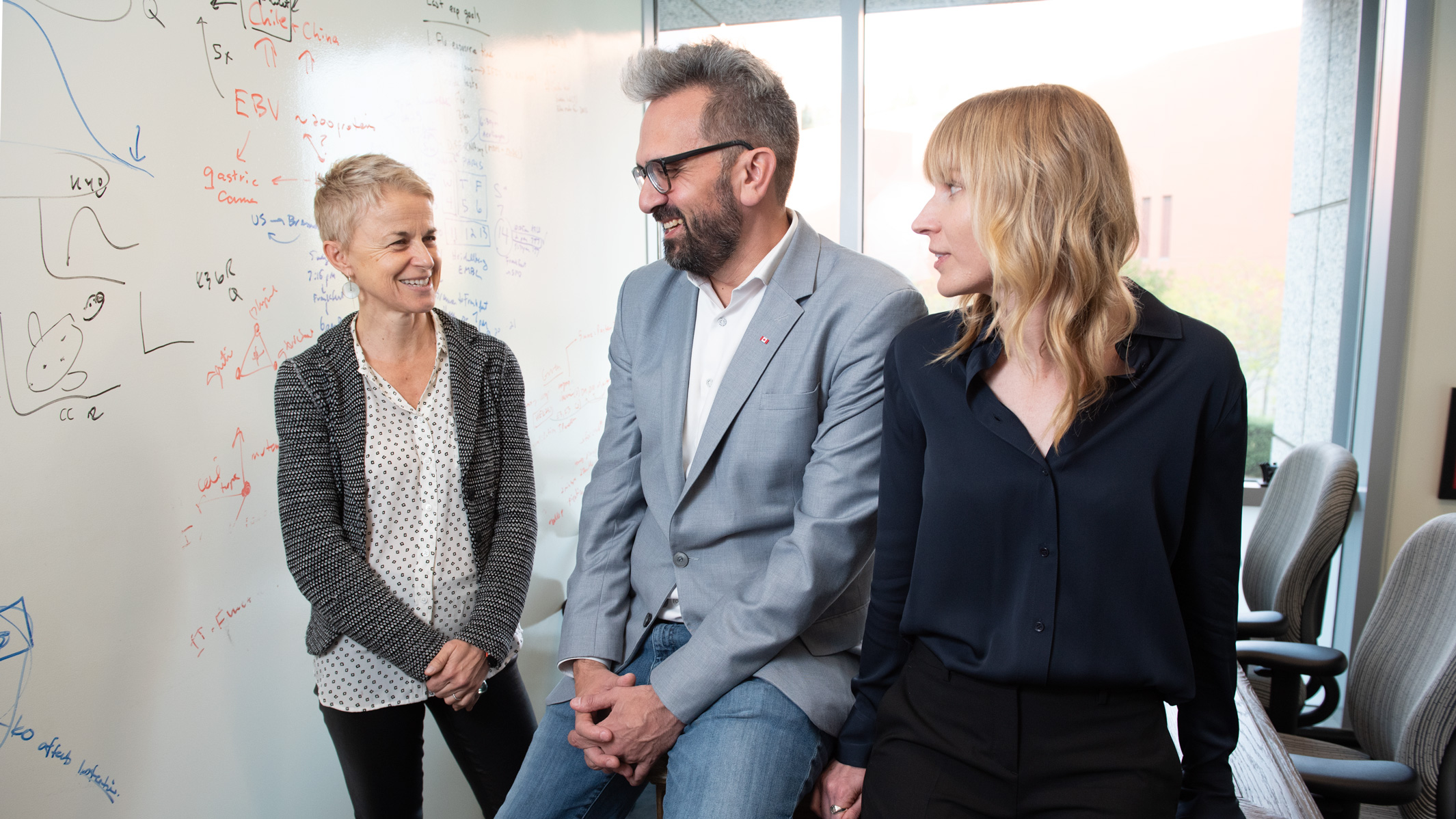 Host-directed therapy instead targets proteins or pathways belonging to the human host cell itself, specifically proteins that are critical to the virus’s ability to function. Human cells do not evolve as rapidly as viruses do, so a host-directed therapeutic treatment may prevent the rapid development of drug resistance seen with classic antivirals.

A single host-directed treatment may also be able to treat multiple types of viral infection because many different viruses depend on the same host pathways for replication.

“Viruses cannot exist in a vacuum,” said Ott. “There’s a very active exchange going on between the virus and the host once the virus gains access to the cell. We are looking at these interactions to try to identify very specific core factors—host pathways or proteins that the virus absolutely needs to replicate itself.”

Isolating these core factors as targets for therapeutic intervention has been the main focus of Ott’s and Krogan’s collaborative research under Gladstone’s BioFulcrum program, and has led to their joint endeavor with Vir.

BioFulcrum is a Gladstone initiative that devotes philanthropic funding to collaborations between research laboratories. The goal is to overcome broad, disease-related problems by translating discoveries into practical applications.

In the case of the collaboration between Ott and Krogan, the problem at hand is how to develop better antivirals, since viruses can so quickly become resistant to the types of drugs currently available. Their BioFulcrum platform works with Vir’s in-house drug discovery and functional genomics capabilities, including CRISPR gene-editing technology and computational biology for target identification, compound libraries and activity screening technology, and expert chemists.

“In my mind it’s the perfect partnership,” said Krogan, who is also a professor of Cellular and Molecular Pharmacology at UCSF and the director of the Quantitative Biosciences Institute UCSF. “At Gladstone we can identify specific new targets in the cell that could be effective for host-directed therapies, and Vir has the capability to develop therapies and bring them to clinical trials, which we can’t do in an academic setting.”

As part of the BioFulcrum effort, Krogan’s lab has been identifying host-virus protein interactions using the cutting-edge instruments at Gladstone’s Thermo Fisher Scientific Mass Spectrometry Facility for Disease Target Discovery. The scientists single out relevant host proteins by first tagging the viral protein of interest and introducing it to a broad assortment of host cell proteins. Then, they isolate that tagged viral protein, bringing along the specific host proteins that physically intermingle with it.

“Our research looks at many, many different pathogens,” said Krogan. “One of the goals is to find commonly hijacked proteins and pathways across multiple diseases, such as influenza, HIV, tuberculosis, hepatitis C, and Zika virus. Then, we could possibly find one drug that could treat multiple different pathogens.”

Once they have identified a promising host protein target, Ott and Krystal Fontaine, PhD, a scientific program leader for BioFulcrum, use special organoids to test the host pathway’s interaction with the virus in an environment that is as physiologically relevant to the human body as possible.

“The organoids are like tiny organs in a dish,” said Ott.

The organoids are derived from progenitor cells that have been isolated from adult lungs. The researchers suspend the lung cells in a special gel where they can form 3D structures. Then the cells begin to proliferate and differentiate, forming an organoid with all the cell types present in the original organ.

“One main focus of this collaboration with Vir is to use our established organoid system and Vir’s genome-editing technologies to develop a platform so we can genetically modify these cells and use them to investigate the role that individual host factors play in virus replication,” said Fontaine, who is also the scientific program manager for Gladstone’s collaboration with Vir. “We want to be able to grow organoids that lack a particular host protein, infect them with a virus, and see in a realistic setting how the virus behaves without access to that host protein. When we find a protein the virus requires to replicate, we know we can take that discovery to the next level.”

That’s because Vir has the technology, resources, and expertise to potentially translate the discoveries into therapeutics. Genetic technologies such as CRISPR-Cas9 and siRNA may enable Vir to transform Gladstone’s organoid cultures, eliminating host proteins one at a time to isolate the core factors that the virus requires. Vir can also test a wide range of potential drug candidates from its large library of test compounds. After isolating an active compound, in-house chemists can adjust and refine the compound for maximum activity. Once a candidate has been identified, Vir may move forward with preclinical studies and clinical trials. By partnering with Vir, Gladstone researchers may be able to translate their discoveries into a tangible impact on infectious disease.

“I’m excited about seeing what we’ve done in the lab come to fruition in a way that may translate into a future treatment,” said Ott. “I think academic initiatives and collaborations like this one with Vir are absolutely necessary to ensure an existing pipeline of functioning drugs in the next 20 years."