Community groups have been advocates and advisers to Gladstone’s leadership to share employee concerns, and to help shape new policies and programming.

A few years into the launch of their community group at Gladstone, leaders of the Women’s Initiative wanted to know the percentage of female speakers at Gladstone’s scientific seminars. Since its founding in 1979, Gladstone has invited speakers from institutions across the country to present their latest research, as a way to encourage collaboration and spark new scientific breakthroughs. The impression was that the majority of speakers over the years had been male, but to know how serious the problem was, they decided to look into the data.

After analyzing the gender of speakers, the group learned that from 2008 to 2018, only 19 percent of speakers at Gladstone seminars had been women. They knew this had to change.

The Women’s Initiative was one of the first community groups formed at Gladstone, organized into several subcommittees in order to address major issues facing women—childcare, community building, and representation—to name a few.

“We launched the Women’s Initiative in 2016 to tackle the obstacles that many women still face in the workforce and in the sciences,” says Megan McDevitt, vice president of communications at Gladstone who spearheaded this initiative. “When I first started at Gladstone, the postdoc population already had a community group that met to discuss issues they were facing and advocate for themselves to the leaders of the organization. It was a natural next step to create the Women’s Initiative, along with several other community groups, such as the Graduate Student Organization (Gladstone GO), and the LGBTQ+ group.”

Currently, Gladstone has 12 community groups—LGBTQ+, Women’s Initiative, Graduate Student Organization, Postdoc Advisory Committee, Green Team, among others. In addition to providing camaraderie amongst members with happy hours and trivia nights, these groups have become crucial as advocates and advisers to Gladstone’s leadership to share employee concerns, and to help shape new policies and programming.

Under the guidance of the LGBTQ+ group, Gladstone has opened several gender-neutral restrooms throughout the building and created a way for everyone to share their preferred gender pronouns on their profiles on Gladstone’s employee intranet, Hello Gladstone. The Graduate Student Organization and Postdoc Advisory Committee lead the planning of Graduate Student Appreciation Week and National Postdoc Week each year, inviting speakers to help with mental health, professional development, and networking. 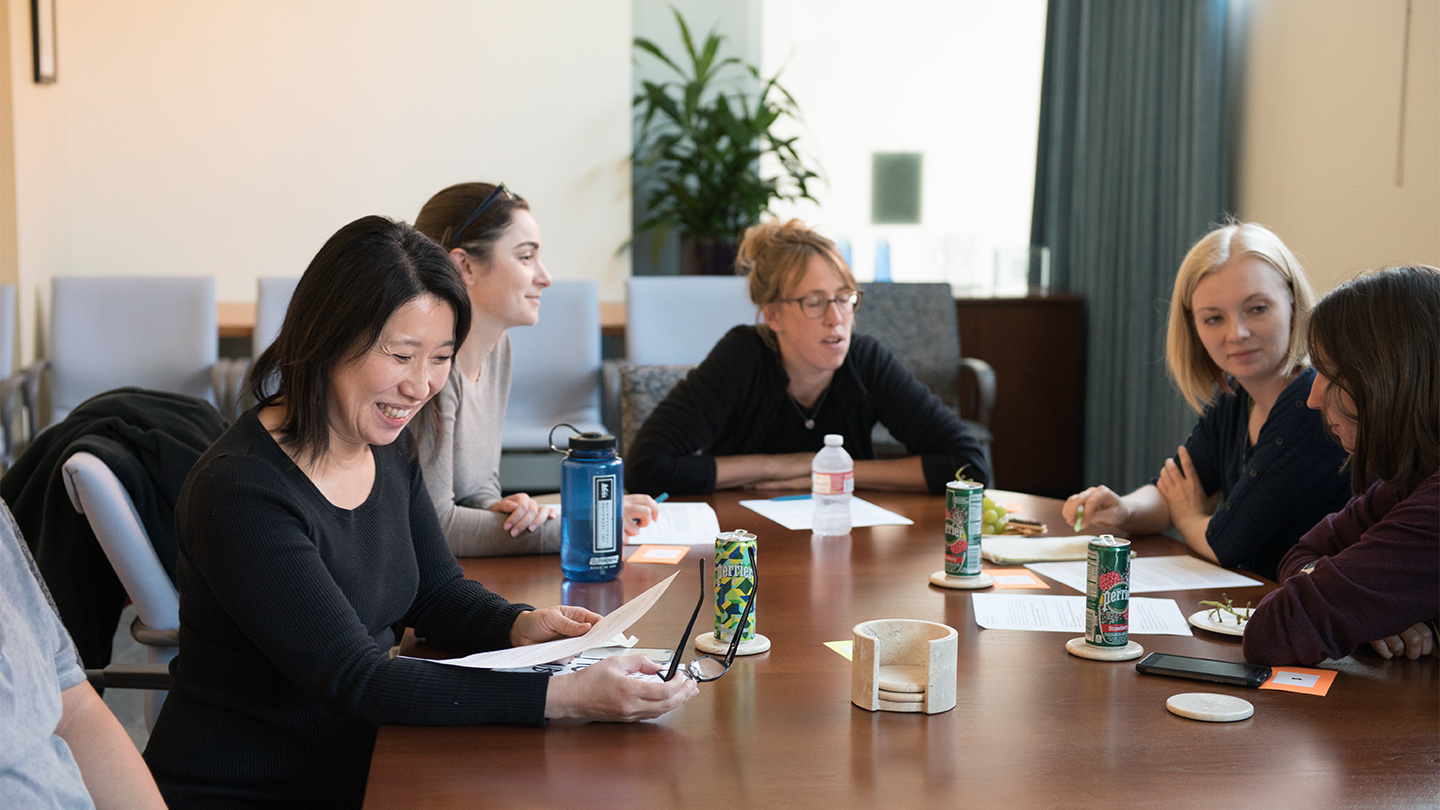 Members of Gladstone gather together for a Women's Initiative Book Club.

To address the issue of gender representation at seminars, the Women’s Initiative formed a subcommittee with the sole purpose of increasing women speakers at Gladstone’s scientific lectures. They chose a relatively simple method—encourage all Gladstonians to nominate a female speaker and create a list for reference whenever someone was hosting a seminar.

“We didn’t want anyone to use the excuse that they didn’t know where to find women speakers,” says Katie Pollard, PhD, director of the Gladstone Institute of Data Science and Biotechnology, and one of the leaders of the Women’s Initiative. “It’s a resource entirely built by our community, providing a platform to recommend speakers and to easily reference those recommendations.”

Since the launch of that subcommittee, female speakers have increased drastically. In 2019, 53 percent of the speakers at seminars were women—the first time Gladstone had more female speakers than male in their 40-year history.

As 2020 unfolded, it became clear that it was time for a new group to form.

The murder of George Floyd sparked demonstrations across the country, protesting the long history of police brutality. During this time, Gladstone President Deepak Srivastava, MD, sent an email to the entire organization to show his support of the protests and Black Lives Matter movement, creating conversations across the institution, and especially amongst Gladstone’s Black employees.

“I had been interested in starting a community group for people of color at Gladstone for some time,” says Zainab Yusuf-Sada, an administrative assistant in the Gladstone Institute of Data Science and Biotechnology. “At first, I mainly wanted to use it to celebrate Black History Month, Latinx Heritage Month, and Lunar New Year. When I used to work with kids, we celebrated everyone’s cultures and holidays and I wanted to bring that to our organization. When Deepak suggested we launch this group, I was thrilled.”

Yusuf-Sada is a first-generation Nigerian-American, who has worked at nonprofits since graduating from Buffalo State University. She’s worked at the Boys and Girls Club and the Service Employees International Union, but came to Gladstone in 2019 based on her interest in public health—her major in college.

Now, Yusuf-Sada has some broader goals in mind for the new community group. Launched over the summer of 2020, the group chose the name, Elevated Voices, and voted unanimously to expand beyond issues facing Black employees. 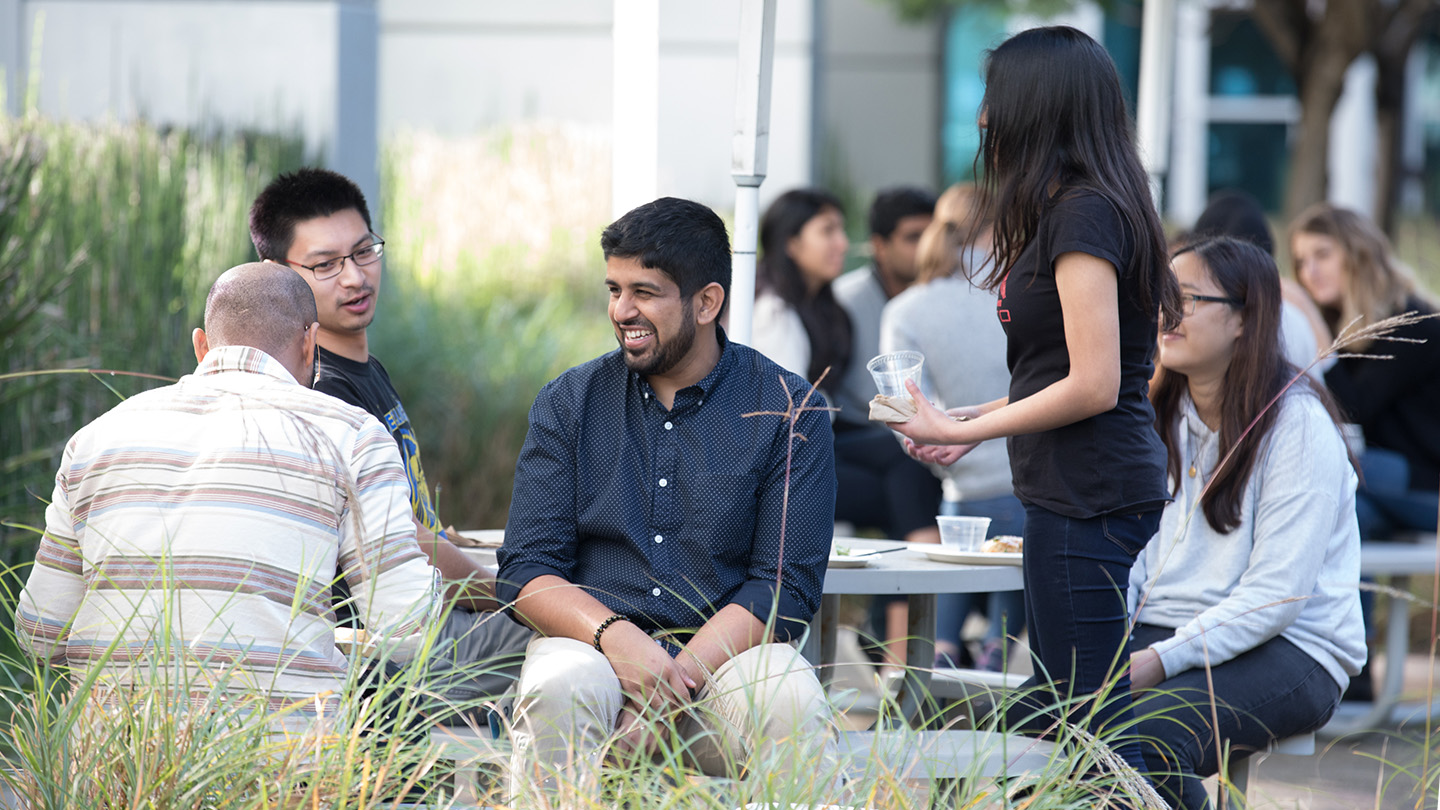 The Graduate Organization (GO) and Gladstone Postdoc Advisory Committee (GPAC) host a number of events throughout the year to bring their communities together.

“I definitely see the group as a way to raise awareness around issues that are facing all people who have been traditionally underrepresented in the sciences,” says Yusuf-Sada, who took on a leadership role for Elevated Voices. “I want people to see us as a resource, as well as advocates, to push the organization’s diversity efforts further and create a truly inclusive environment.”

Yusuf-Sada is passionate about increasing and maintaining ethnic and racial diversity within Gladstone’s walls. “When I was hired, I was the only Black person on my floor,” says Zainab. “I think I still might be.”

While Gladstone has committed to increasing racial diversity within the organization, Yusuf-Sada also thinks it’s important to foster deep connections and help support employees who may feel out of place due to the lack of representation. She hopes that Elevated Voices can provide this kind of support.

Elevated Voices is a place for all Gladstonians who want to spark change, regardless of race, gender, or position at the organization.

“I joined this group with the intention of changing the culture of the organization,” says Kenneth Johnson, senior lab aide at Gladstone and co-lead of Elevated Voices. “While this group launched because of the Black Lives Matter movement over the summer, it doesn’t just have to consist of Black people, or people of color. If we don’t all work together, nothing is going to change.”

The group’s advocacy aims to go beyond the walls of the institution. One major goal for the group is to encourage students of color to pursue careers in STEM.

For Johnson, community outreach is his biggest objective. “I want to reach out to more kids of color and show them that science is cool and they deserve to be here just as much as anybody else,” he says.

The power of community groups at Gladstone has been clear. And these groups don’t work in silos. To support the efforts of Elevated Voices, the Women’s Initiative has expanded the goal of their speaker form to not just increase the gender diversity of speakers at Gladstone, but also to increase racial diversity.

“We’ve made huge strides increasing the number of women speakers at our scientific seminars,” says McDevitt. “I’m excited to see what Elevated Voices can accomplish both within Gladstone and within the broader science community.”

Nicole Velasquez shares why she loves working at Gladstone, the importance of Black History Month, and how she spends her time outside of work

In honor of Latinx Heritage Month, learn more about these game-changing Latinx scientists throughout history

What Does Juneteenth Mean to Gladstonians?