A team of Gladstone scientists determined how previously unconnected pieces of the Alzheimer's disease puzzle fit together.

Studying the complex causes of Alzheimer’s disease, and how to treat and prevent this condition, is like solving a many-piece puzzle, with scientists each tackling a small section, unsure of how it might fit into the larger picture. Now, researchers at Gladstone Institutes have determined how a handful of previously unconnected puzzle sections fit together.

In a study published in the journal iScience, the team demonstrates that subtle epileptic activity encourages abnormal brain inflammation in mouse models simulating key aspects of Alzheimer’s disease. The scientists show that multiple known players in Alzheimer’s disease fit into this intriguing link between the nervous system and the immune system, including the protein tau, often misfolded and aggregated in diseased brains, and TREM2, a genetic risk factor for the disease.

“Our findings suggest ways to prevent and reverse Alzheimer’s-related abnormalities in both brain networks and immune functions,” says Lennart Mucke, MD, director of the Gladstone Institute of Neurological Disease and a senior author of the new study. “These interventions could reduce disease symptoms and might even help modify the course of the disease.”

Scientists have known for a while that Alzheimer’s disease is associated with chronic inflammation in the brain. A driver of this inflammation appears to be the accumulation of amyloid proteins in the form of “plaques,” a neuropathological hallmark of the illness.

In the new study, the researchers identified non-convulsive epileptic activity as another critical driver of chronic brain inflammation in an Alzheimer’s-related mouse model. This subtle type of epileptic activity also occurs in a substantial proportion of people with Alzheimer’s disease and can be a predictor of faster cognitive decline in the patients. 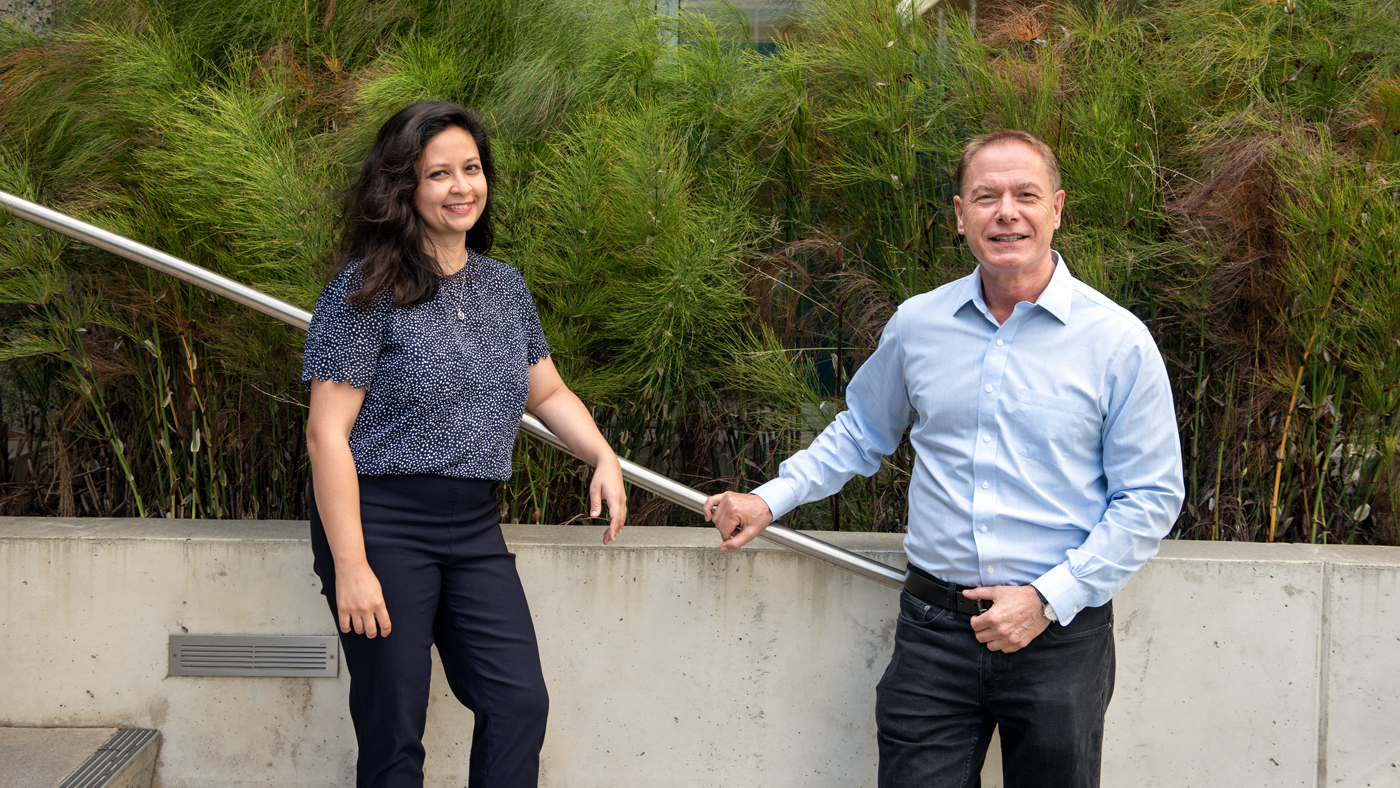 The new study by Melanie Das (left), Lennart Mucke (right), and their colleagues suggests that certain anti-epileptic or tau-reducing treatments could be promising for people in the early stages of Alzheimer’s disease.

In the mouse model, the scientists prevented both abnormalities by using genetic engineering to eliminate the protein tau, which promotes neuronal hyperexcitability (the firing of too many neurons at the same time). They were also able to reverse alterations to the neural network and immune cells, at least in part, by treating mice with the anti-epileptic drug levetiracetam.

A recent clinical trial of levetiracetam that emerged from Mucke’s previous work revealed cognitive benefits in patients with Alzheimer’s disease and subclinical epileptic activity, and tau-lowering therapeutics are under development, also building on research in Mucke’s lab. The new study reaffirms how promising these treatments could be for people in the early stages of Alzheimer’s disease.

Inflammation isn’t all the same; it can drive disease, as is the case in conditions like rheumatoid arthritis, or it can help the body heal, for example, after a cut.

“It’s important to differentiate whether Alzheimer’s disease causes too much bad inflammation, a failure of good inflammation, or both,” says Mucke, who is also the Joseph B. Martin Distinguished Professor of Neuroscience and professor of neurology at UC San Francisco. “Looking at the activation of inflammatory cells in the brain doesn’t immediately tell you whether the activation is good or bad, so we decided to investigate further.”

Mucke and his colleagues discovered that, when they reduced epileptic activity in the mouse brain, one of the inflammatory factors most affected was TREM2, which is produced by microglia, the brain’s resident immune cells. People with genetic variants of TREM2 are two to four times more likely to develop Alzheimer’s disease than people with normal TREM2, but scientists are still trying to decipher the precise roles this molecule plays in health and disease.

The scientists first showed that TREM2 was increased in brains of mice with amyloid plaques, but reduced after suppression of their epileptic activity. To find out why, they examined whether TREM2 affects the susceptibility of mice to low doses of a drug that can cause epileptic activity. Mice with reduced levels of TREM2 showed more epileptic activity in response to this drug than mice with normal TREM2 levels, suggesting that TREM2 helps microglia suppress abnormal neuronal activities.

“This role of TREM2 was quite unexpected and suggests that increased levels of TREM2 in the brain might actually serve a beneficial purpose,” says Das. “TREM2 has been primarily studied in relation to pathological hallmarks of Alzheimer’s disease such as plaques and tangles. Here, we found that this molecule also has a role in regulating neural network functions.”

“The genetic variants of TREM2 that increase the risk for Alzheimer’s disease appear to impair its function,” adds Mucke. “If TREM2 doesn’t work properly, it could be harder for immune cells to suppress neuronal hyperexcitability, which in turn might contribute to the development of Alzheimer’s disease and accelerate cognitive decline.”

Several pharmaceutical companies are developing antibodies and other compounds to enhance the function of TREM2, primarily to enhance the removal of amyloid plaques. According to Mucke, such treatments might also help suppress abnormal network activity in Alzheimer’s disease and related conditions.