Children with Dravet syndrome, a severe form of epilepsy that begins in infancy, experience seizures, usually for their entire life. They are at high risk of sudden unexpected death in epilepsy (SUDEP) and can also develop intellectual disability and autism. Available treatments typically fail to improve these symptoms.

Now, a group of scientists at Gladstone Institutes led by Lennart Mucke, MD, reports new findings in the journal Science Translational Medicine that could guide the development of better therapeutic strategies for Dravet syndrome and related conditions.

The researchers previously discovered, in a mouse model of Dravet syndrome, that genetically removing the protein tau from the entire body during embryonic development reduces epilepsy, SUDEP, and autism-like behaviors. In the new study, they pinpoint the key cell type in the brain in which tau levels must be reduced to avoid these problems. They also show that lowering tau is still effective in mice when the intervention is delayed until after their birth. 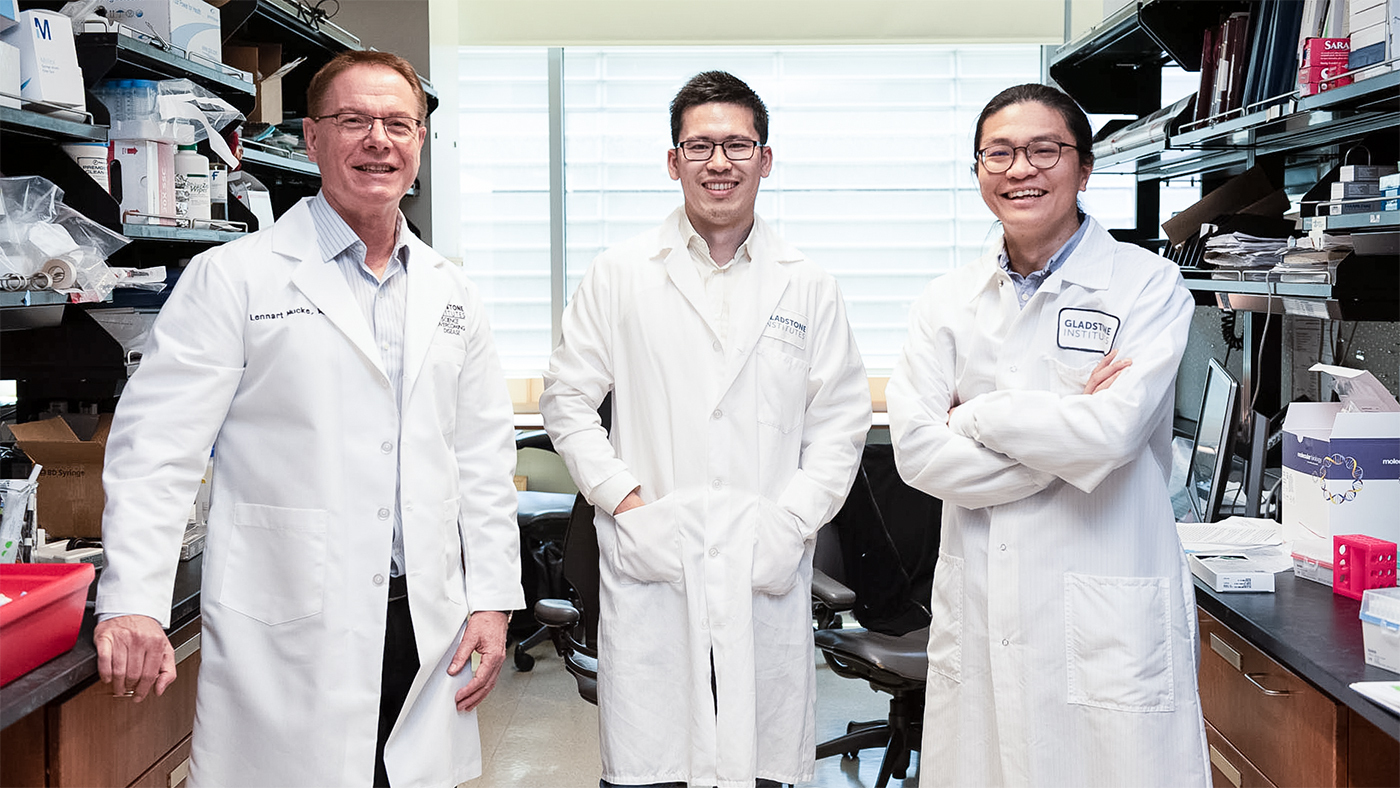 A team of scientists led by Mucke (left), and including Eric Shao (center) and Che-Wei Chang (right), discovered a promising treatment strategy targeting the protein tau that could be useful for Dravet syndrome, as well as epilepsy, autism, and Alzheimer's disease.

“Our findings provide new insights into the cellular mechanisms by which tau reduction prevents abnormal overexcitation in the brain,” says Mucke, director of the Gladstone Institute of Neurological Disease. “They are also encouraging from a therapeutic perspective, since in humans, initiating treatment after birth is still more feasible than treating embryos in the womb.”

Tau is a promising therapeutic target not only for Dravet syndrome, but also for a variety of other conditions, including different types of epilepsy and some forms of autism, as well as Alzheimer’s disease and related neurodegenerative disorders.

A well-functioning brain depends on the correct balance between the activity of excitatory and inhibitory neurons—the former stimulate the activity of other neurons, while the latter suppress it. Dravet syndrome causes an imbalance between these types of cells, resulting in abnormally high and synchronized activity in brain networks that can manifest as seizures and other symptoms.

Mucke and his colleagues recently showed that removing tau from the entire brain changes the activities of both excitatory and inhibitory neurons, although in different ways. The current study aimed to determine whether it is more important to reduce tau in excitatory or inhibitory neurons.

“This means that tau production in excitatory neurons sets the stage for all these abnormalities to occur, including autistic behaviors, epilepsy, and sudden unexpected death,” says Mucke, who is also the Joseph B. Martin Distinguished Professor of Neuroscience and a professor of neurology at UC San Francisco.

While the genetic approaches the scientists used to remove tau from specific cell types are effective and precise, they are not yet easy to use as a therapeutic intervention in humans. So, the team turned to a more practical option: global tau reduction in the brain with DNA fragments known as antisense oligonucleotides, or ASOs. The scientists delivered an anti-tau ASO into the brain of mice 10 days after birth and found that most symptoms of Dravet syndrome were gone 4 months later.

“We observed a robust reduction of SUDEP, seizure activity, and repetitive behaviors,” says Eric Shao, PhD, a scientist in Mucke’s lab and first author of the study.

In addition, the ASO treatment had no obvious side effects. 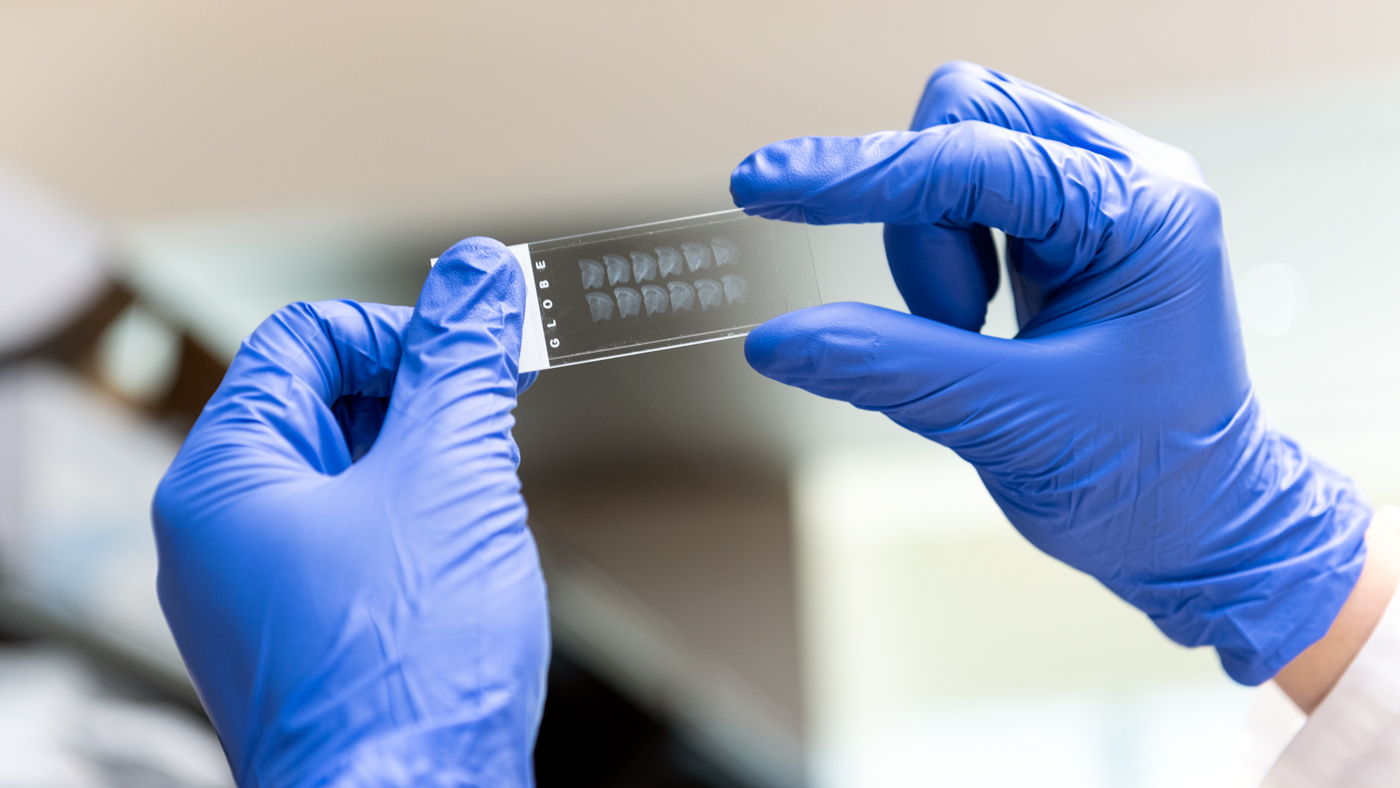 Gladstone scientists found that globally reducing tau in the brain with an ASO reduced most symptoms of Dravet syndrome. Here, Shao looks at sections of the mouse brain to determine whether the anti-tau ASO penetrated all regions of the brain.

“We are excited about these findings, especially since another anti-tau ASO has already undergone a Phase I clinical trial in people with Alzheimer’s disease,” says Mucke. “It could be useful to consider this strategy also for Dravet syndrome and related conditions. However, defining the optimal timing for treatment initiation will be key, as the window of opportunity might be quite narrow.”

Although Alzheimer’s disease, epilepsy, and autism have diverse causes, they all seem to be associated with abnormally high ratios between excitatory and inhibitory neuronal activities—and this abnormality could potentially be fixed by tau-lowering therapeutics.

Still, a treatment based on anti-tau ASOs would involve repeated spinal taps, a procedure most people would rather avoid. Therefore, Mucke is partnering with Takeda Pharmaceuticals to develop small molecules that could reduce brain tau levels when administered as a pill.

The paper “Tau ablation in excitatory neurons and postnatal tau knockdown reduce epilepsy, SUDEP, and autism behaviors in a Dravet syndrome model” was published in the journal Science Translational Medicine on April 27, 2022.