Leor Weinberger (left) and his team discovered a fundamental mechanism that appears to speed the transformation of stem cells into other cell types. Xinyue Chen (right) is one of the authors of the group's new study.

To speed up a chemical reaction, a chemist might place the reactants over a Bunsen burner. Adding heat increases the degree of random movements and collisions of particles, accelerating the reaction.

In cell biology, one important “reaction” is the transformation of stem cells into all the other cells in the body, a process known as differentiation. Gladstone Institutes researchers have now discovered a molecular mechanism that acts like a Bunsen burner to “turn up the heat” and accelerate differentiation.

However, instead of boosting temperature, this process amplifies random fluctuations in levels of gene expression—or which genes are turned on or off within a cell. Boosting these fluctuations, also known as “noise,” appears to aid the switch from one cell type to another.

“Researchers have studied and characterized these fluctuations, or ‘noise’ in gene expression, for decades,” says Leor Weinberger, PhD, William and Ute Bowes Distinguished Professor, and director of the Center for Cell Circuitry at Gladstone. “But it was unclear if this noise was simply an unavoidable by-product of gene expression, which was widely assumed, or if it played some functional role.”

Now, as reported in the journal Science, he and his team have discovered a pathway they named discordant transcription through repair (DiThR, pronounced “dither”). The DiThR pathway appears to boost the noisiness of gene expression in stem cells and enhance their ability to differentiate.

The discovery of the DiThR pathway arose from the team’s earlier work on HIV.

“We’d been tackling a long-standing problem in HIV, namely how to alter HIV’s ability to persist in a long-lived latent state in patients,” says Weinberger, who is also a professor of biochemistry and biophysics, and pharmaceutical chemistry at UC San Francisco (UCSF). “We discovered that molecules that alter viral expression noise also reduced HIV persistence.”

“It was pretty startling when these same molecules worked in stem cells,” he adds. “And, trying to understand how these molecules work turned into a search for a fundamental biological mechanism.” 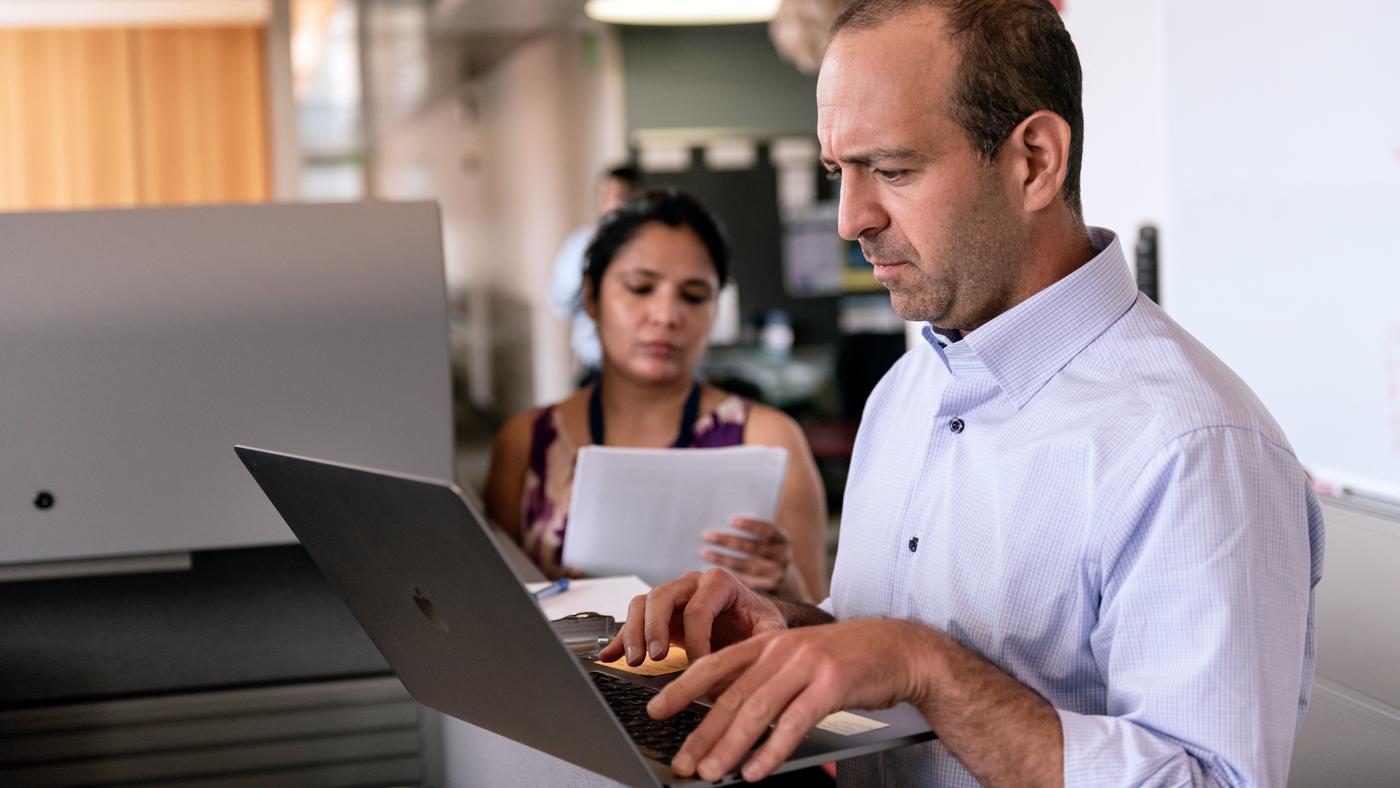 Leor Weinberger’s discovery arose from previous work on how HIV persists in cells. Sonali Chaturvedi, shown in the background, is also an author of the new study.

When a gene is turned on, or expressed, the information stored in the gene is used to build substances that a cell needs to function. But the vast majority of genes do not stay on all the time.

Most genes toggle—or switch between active and inactive states, turning on and off—every few minutes to every few hours. This creates noise in gene-expression levels. HIV, once it infects a cell, acts very much like a human gene and exhibits similar noise properties.

While studying HIV, Weinberger’s team uncovered the existence of molecules that could enhance noise, or switch the expression machinery between active and inactive states, but, curiously, without affecting the average level of expression. They called them noise-enhancer molecules. These molecules acted like Bunsen burners for gene expression and increased the efficiency of drugs designed to wake HIV from a silent state, which is part of a strategy to cure patients.

But how these noise-enhancer molecules could boost noise without altering expression levels was completely unknown.

On a whim, the scientists examined what happened when noise-enhancer molecules were applied to embryonic stem cells without HIV. Amazingly, these molecules had the same effect on stem cells as they did on HIV, amplifying noise without changing the expression level. They also accelerated the stem cells’ ability to transform into other cell types.

The team’s main findings were that the mechanism by which noise-enhancer molecules boost noise involves a process for repairing certain errors in DNA that may arise when genes are turned on. A key component of this DNA repair process is a protein known as AP endonuclease 1 (Apex1).

“We found that Apex1 directly alters the shape of the DNA double helix in a way that first impedes and then accelerates gene expression,” says the study’s first author, Ravi Desai, an MD/PhD student in the UCSF Medical Scientist Training program in Weinberger’s lab.

The team showed that Apex1 is the critical factor in this new DiThR pathway, which increases noise across the entire array of genes in the genome. 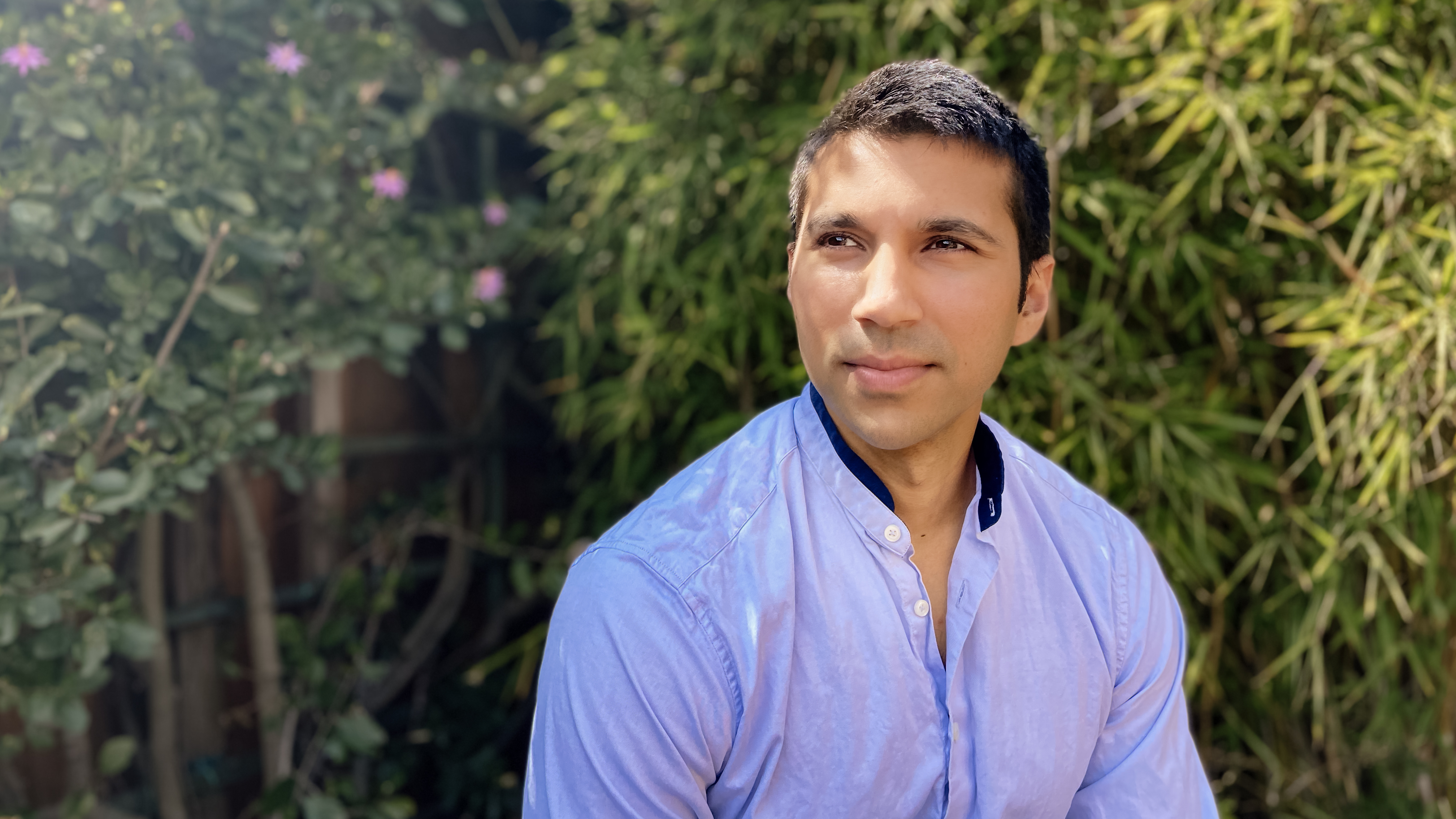 In the new study, Ravi Desai helped identified a pathway that could make cells more responsive to the signals that guide their fate. (Photo: Trena Mukherjee)

They found that the increased noise imparted by DiThR allowed the stem cells to differentiate more efficiently, like the Bunsen burner does for chemical reactions.

What’s more, the mechanism also worked in the opposite direction. It improved the efficiency of a process that turns differentiated cells back into pluripotent stem cells, which have the potential to become several different cell types—a finding that earned Gladstone scientist Shinya Yamanaka, MD, PhD, a Nobel Prize in 2012.

“Our findings suggest that the DiThR pathway makes cells more responsive to the signals that guide their fate,” says Desai. “That means this mechanism may play a fundamental biological role in the development of embryos.”

Looking ahead, the research team plans to further map out the various components of the DiThR pathway.

“Our goal now is to understand how DiThR is regulated and if associated noise-control pathways exist,” Weinberger says. “Ultimately, approaches to harness these pathways could dramatically improve cellular engineering and stem cell–based therapies.”

The paper “A DNA-Repair Pathway Controls Transcriptional Noise to Promote Cell-Fate 1 Transitions” was published by the journal Science on July 22, 2021.