Gladstone scientists discovered how to grow a new kind of organoid—a three-dimensional, organ-like cluster of cells. Shown here is the study's first author, Ana Silva, a postdoctoral scholar in the McDevitt Lab.

At the earliest stages of a new human life, cells that seem identical begin to divide into distinct types that eventually grow into a diverse array of tissues and organs. During this process, neighboring tissues exchange chemical signals that prompt different steps of each other’s development. But this crosstalk is complex and dynamic, and therefore difficult to study.

Now, scientists at Gladstone Institutes have discovered how to grow a new kind of organoid—a three-dimensional, organ-like cluster of cells—that mimics how gut and heart tissues arise cooperatively from stem cells.

This first-of-its-kind organoid could serve as a new tool for laboratory research into signaling between tissues that is essential for healthy human development.

“Our research highlights promising new dimensions for organoid technologies that could improve our understanding of how developing organs and tissues cooperate and instruct each other,” says Gladstone Senior Investigator Todd McDevitt, PhD, the senior author of a new study published in the journal Cell Stem Cell. 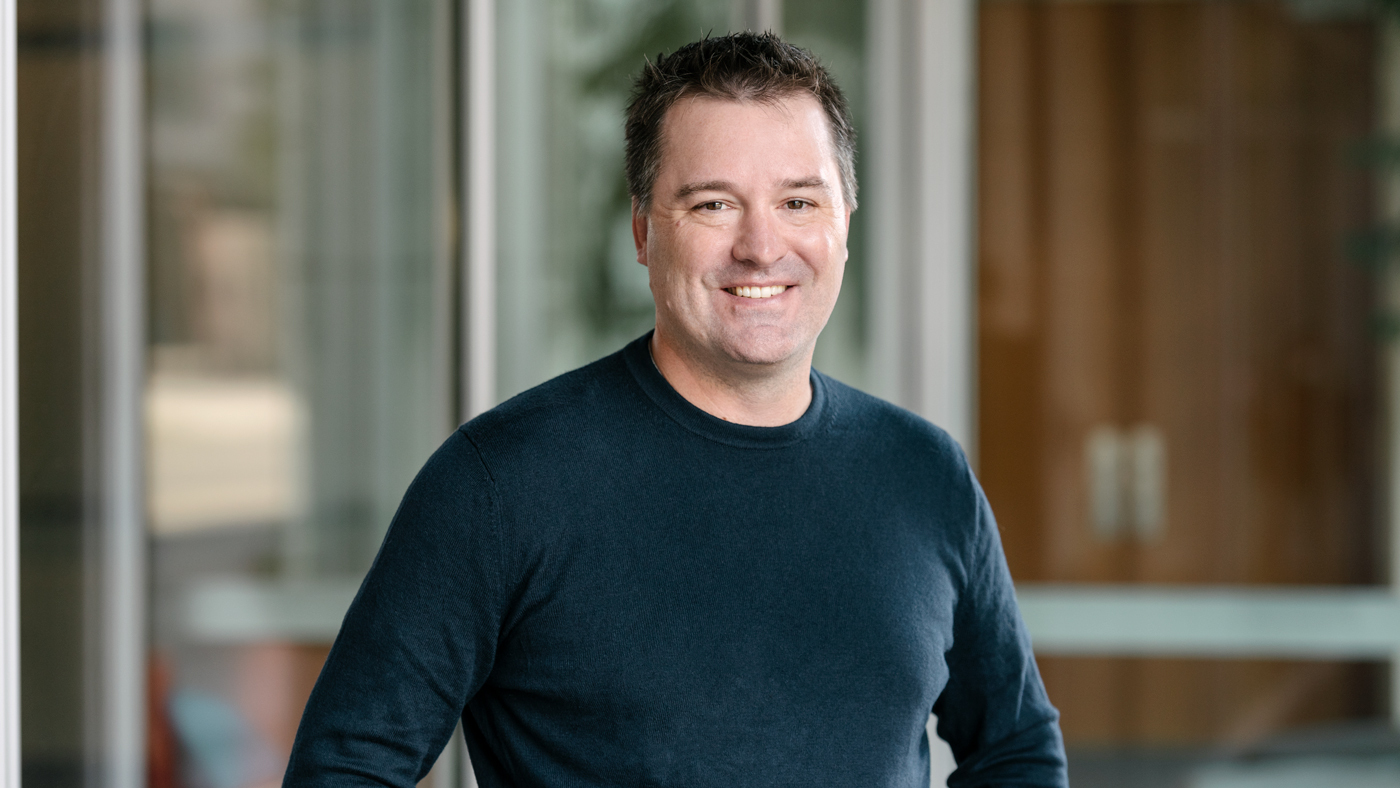 Todd McDevitt and his colleagues engineered a new type of organoid that can shed light on healthy human development and help clarify how that process can go wrong.

McDevitt’s lab has been leading efforts in engineering new ways to grow organoids, which are miniature multi-cell structures that reproduce, in the dish, the features and functions of the heart, brain, lungs, and other organs.

His team creates heart organoids from human induced pluripotent stem cells. They coax these cells into becoming heart cells by growing them in various cocktails of nutrients and other naturally occurring substances. While a conventional cocktail yields mostly heart muscle cells, the scientists tried a different cocktail that might allow a greater variety of heart cells to form.

They did not originally set out to create a new kind of organoid. Yet to their surprise, they found that in a number of cases, the new cocktail led to organoids that contained not only heart, but also gut cells.

“We were intrigued because organoids normally develop into a single type of tissue—for example, heart tissue only,” says Ana Silva, PhD, a postdoctoral scholar in the McDevitt Lab and first author of the new study. “Here, we had both heart and gut tissues growing together in a controlled manner, much as they would in a normal embryo.” 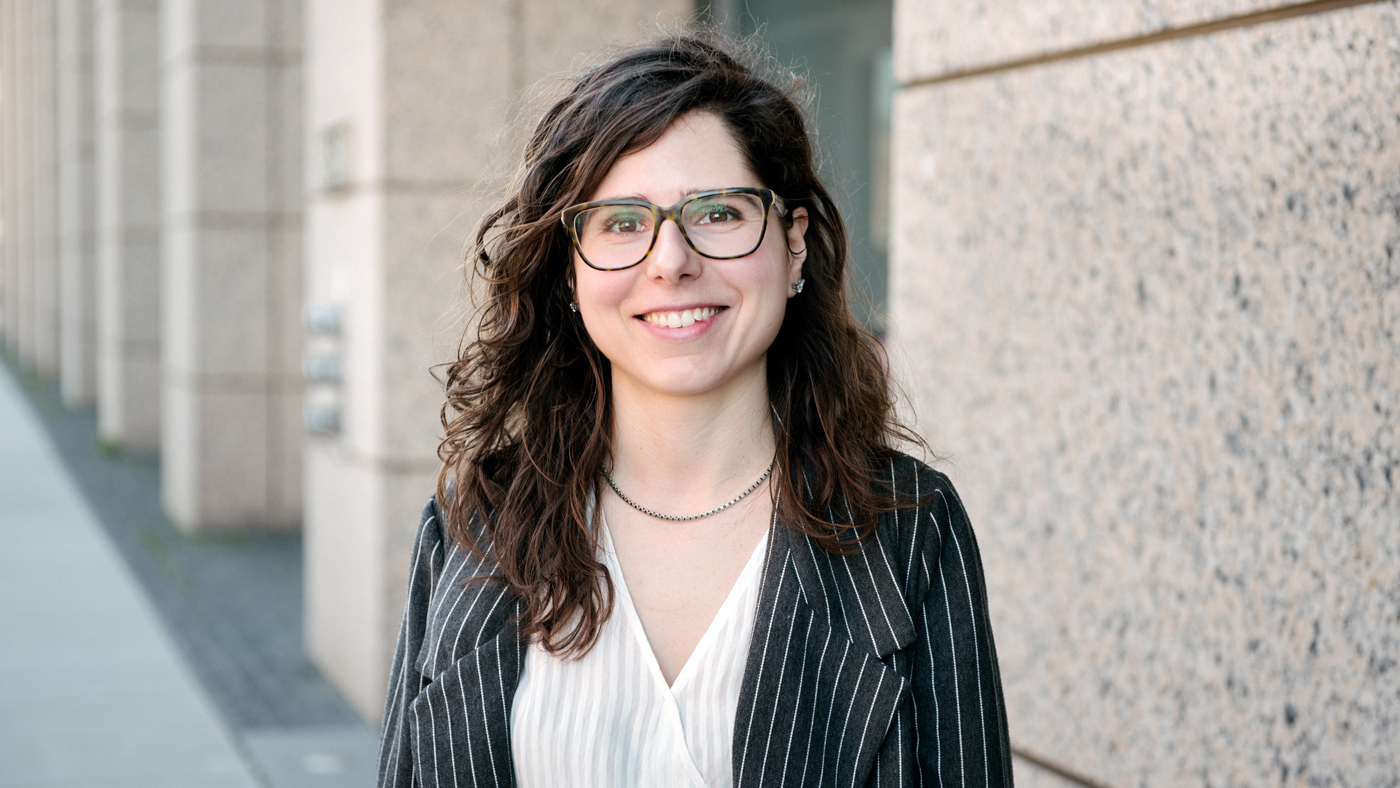 These organoids offer a promising new way to examine the crosstalk between developing tissues, which has so far relied on growing single-tissue organoids separately and then attempting to combine them.

Painting a Full Picture of the New Organoid

The researchers found that compared to conventional heart organoids, the new organoids resulted in much more complex and mature heart structures—including some resembling more mature-like blood vessels. The types and proportions of heart cells in the new organoids, and their electrical properties, were highly similar to those of real fetal hearts. By contrast, cells in conventional organoids, which do not contain gut tissue, remain stuck at a much earlier stage of their transformation into heart cells.

“Once it became clear that the presence of the gut tissue contributed to the maturity of the heart tissue, we realized we had arrived at something new and special,” says McDevitt, who is also a professor of bioengineering and therapeutic sciences at UC San Francisco. 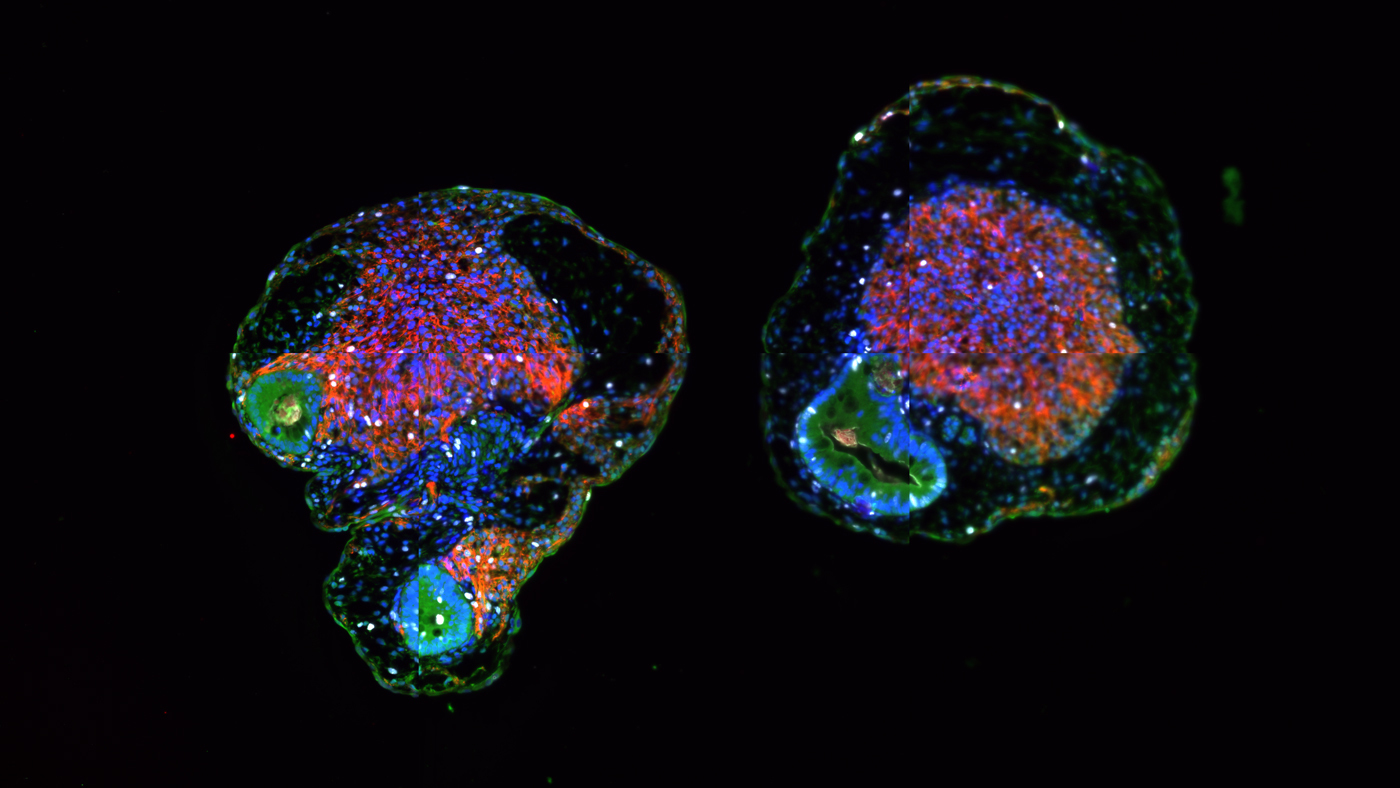 Microscopy image of the new type of organoid created by Todd McDevitt, Ana Silva, and their colleagues in which heart tissue (red, purple, and orange masses) and gut tissue (blue and green masses) are growing together. Captured by Ana Silva.

The scientists also showed that gut tissue in the new organoids matured into a variety of recognizable structures and cell types, particularly of the small intestine. Moreover, the gut and heart cells in the new organoids released chemicals known to be involved in signaling between the two tissues during heart development.

“It is a beautiful, dynamic model of heart development,” says Silva. “Our findings suggest a way to conduct this research in a more realistic context, where both gut and heart tissues develop together from the same starting materials.”

A Robust System for Research

The researchers have been able to keep the new organoids alive in a dish for more than 1 year, which is a very long time for anything grown in the lab, especially a large 3D aggregate of cells. This durability suggests that similar organoids could be grown to serve as robust systems for prolonged laboratory research. And while the organoids likely cannot perfectly capture every part of real heart and gut development, they could help deepen the understanding of this cooperative process.

In addition to shedding new light on healthy human development, the organoids could help clarify how that process can go wrong. For instance, they could prove valuable for research into congenital disorders that are known to affect both heart and gut development, such as chronic atrial and intestinal dysrhythmias.

Further research will be needed to refine methods for growing these organoids reliably, so they can be used to their full potential. And in the future, researchers could theoretically develop other, similar organoids involving different pairs of tissues, such as heart and lung, or lung and kidney.

“Communication between developing tissues is perhaps not yet as widely appreciated as it should be,” McDevitt says. “We can now potentially explore this fundamental process in a way we never conceived of before.”

The paper “Co-emergence of cardiac and gut tissues promotes cardiomyocyte maturation within human iPSC-derived organoids” was published in the journal Cell Stem Cell on December 2, 2021.

This work was supported by a California Institute of Regenerative Medicine grant (LA1_C14-08015) and the Gladstone BioFulcrum Heart Failure Research Program.