Gladstone researchers Tongcui Ma (left) and Nadia Roan (right) teamed up with collaborators to uncover new aspects of HIV infection by monitoring sugars at the surface of immune cells.

HIV researchers have long been trying to identify the specific cells that the virus prefers to infect and hide in. They know that HIV favors a special type of immune cells called memory CD4 T cells. But these cells come in many flavors, and it has been difficult to ascertain exactly what makes one type of memory CD4 T cell more attractive to HIV than another.

For years, Gladstone Associate Investigator Nadia Roan, PhD, and her team have tackled this question by analyzing CD4 T cells based on the collection of proteins they bear on their surface. Recently, they set their sight on another type of molecule at the cell’s surface: sugars.

Roan teamed up with Mohamed Abdel-Mohsen, PhD, an associate professor at The Wistar Institute and a specialist in the cellular machinery that synthesizes sugars. Together, the scientists uncovered surprisingly different sugar patterns on different immune cells, and an intriguing interplay between HIV and the sugars coating CD4 T cells. They report their findings in the journal eLife.

The scientists analyzed sugars on the surface of individual immune cells to help identify cells that HIV prefers to infect.

“One of the most striking findings from our study is that the amount of a single type of surface sugar can distinguish between memory CD4 T cells with vastly different biological features and susceptibility to HIV infection,” says Roan, who is also a professor of urology at UC San Francisco and the study’s co-senior author.

The work also showcases a new technique for studying individual cells from large populations that could lead to a more detailed picture of cellular diversity.

“There is a tremendous diversity of cell-surface sugars,” says Abdel-Mohsen, co-senior author of the study. “But they have been understudied, in part because they are harder to track than proteins. By sorting large populations of cells based on both their sugar and protein profiles, we may uncover new classes of cells that have eluded earlier studies and could hold the key to solving important biological problems.”

The researchers studied various chains of simple sugar molecules. The chains differ in length, branching patterns, and the type of sugars they contain, and are known to affect a number of cell properties.

“We wondered to what extent cell-surface sugars might help us tell apart different types of cells within a population of immune cells,” says Tongcui Ma, PhD, the study’s first author and a scientist at Gladstone.

To answer this question, Roan’s team adapted a technique called CyTOF, which they previously used to study the protein profile of individual immune cells. CyTOF relies on antibodies to identify specific proteins, and can record the presence, absence, and amount of nearly 40 different proteins at once. In this study, the team replaced five of the CyTOF antibodies with five different lectins, molecules that can recognize various types of sugars.

“We now have a good toolkit to analyze in great detail the combination of proteins and sugars present on single cells.”

“We don’t have as many lectins as we have antibodies,” says Abdel-Mohsen. “But we know of several lectins that can distinguish between a variety of sugars with different shapes and molecular compositions, and we plan to expand our work by using new lectins in the future.”

With the modified CyTOF, which they named CyTOF-Lec, the scientists analyzed immune cells from the blood and tissues of human donors. They found that the pattern of sugars differed depending on where the cells came from—blood versus tonsil versus the reproductive tract—and what type of immune cells they were—CD4 T cells versus other T cells versus antibody-producing B cells.

“We now have a good toolkit to analyze in great detail the combination of proteins and sugars present on single cells,” says Roan. “And since all cells in the body carry sugars at their surface, we believe CyTOF-Lec will be useful for the broader biomedical research field.”

Encouraged by this finding, the scientists next applied CyTOF-Lec to CD4 T cells that they had first exposed to HIV in the lab. Not all CD4 T cells become infected by HIV, and Roan’s team and others over the years have uncovered some protein patterns that help identify the most susceptible cells.

The scientists also know that after entering a cell, HIV changes the proteins that the cell puts on its surface—a phenomenon called viral remodeling. Roan’s team has developed a bioinformatics tool called PP-SLIDE to reconstruct the profile of a cell before it became infected and remodeled by HIV.

By combining CyTOF-Lec with PP-SLIDE, the team made two important discoveries.

First, HIV appeared to preferably infect the memory CD4 T cells with the largest amounts of two types of sugars on their surface: fucose and sialic acid. Further experiments confirmed that one of these sugars, sialic acid, is indeed required for HIV to efficiently infect CD4 T cells.

Second, HIV further boosted the production of these two sugars in the cells it had infected, indicating that remodeling is not limited to proteins, but extends to sugars as well. 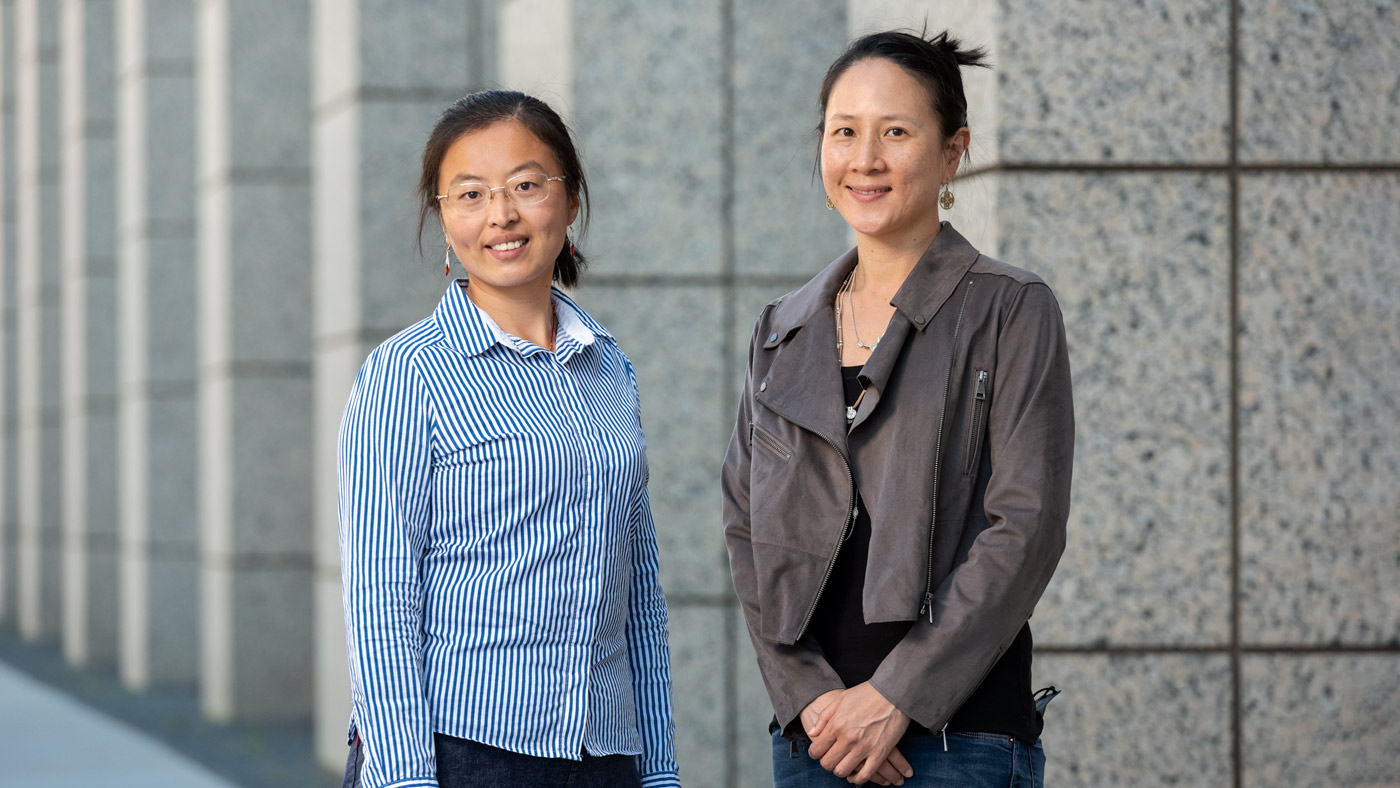 Ma (left) and Roan (right) discovered that HIV prefers to infect cells with high levels of sialic acid, a type of sugar that may help virus-infected cells survive.

By escaping immune surveillance, these stealth infected cells may allow HIV to quickly take hold and spread to more sites in the body. They might also represent good therapeutic targets.

HIV also hides from immune defenses by settling inside some cells in a mostly silent form. These silent, or “latently,” infected cells are difficult to eradicate because it has so far been impossible to distinguish them unambiguously from non-infected cells. Roan’s team now plans to apply CyTOF-Lec to samples from people living with HIV, in which these cells persist even in the presence of antiretroviral therapy.

“In doing so, we might discover sugar-based biomarkers that could be used to target and eliminate these latently infected cells,” says Roan.

Of course, these tantalizing hypotheses will need to be tested with more experiments. But the findings so far establish CyTOF-Lec as a promising new tool to uncover new cell biology, including the role of sugars in infection by viruses other than HIV, such as SARS-CoV-2 and influenza.

Other authors include Matthew McGregor, Guorui Xie, and Ashley F. George of Gladstone; and Leila B. Giron of The Wistar Institute.