Under the microscope, two cells might look like identical spheres. But flash a laser at the cells and they’ll appear differently; perhaps molecules deep inside one cell contain tiny fluorescent tags that illuminate in response. Or maybe the organization of membranes in one cell deflects the light in a different way. Now, repeat that experiment on cell after cell and patterns will begin to emerge—a population of cells can be divided into groups based on their physical and chemical properties.

This framework is the essence of modern flow cytometry. Living cells, suspended in fluid, stream through a minuscule channel, each one momentarily illuminated by a powerful, focused laser. In a matter of minutes, information about tens of thousands of individual cells can be captured. With an additional machine—a cell sorter—the cells can not only be analyzed, but physically separated into groups. 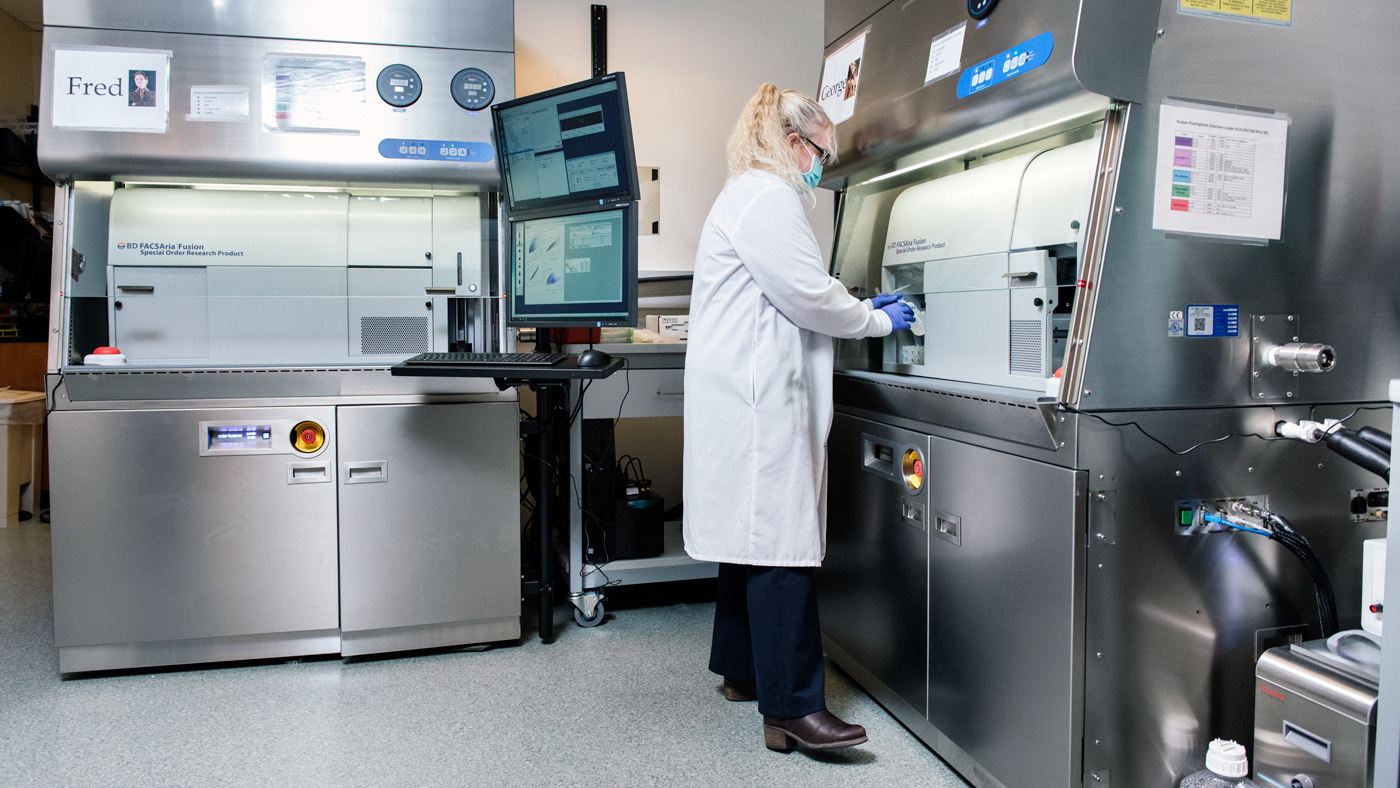 Jane Srivasava, director of the Flow Cytometry Core, helps scientists study the variability among populations of cells, with single-cell resolution.

At Gladstone Institutes, a Flow Cytometry Core facility provides biomedical researchers with the equipment and expertise to analyze and sort diverse collections of living cells. As flow cytometry improves by leaps and bounds, the technology is enabling these researchers to answer questions such as why some immune cells are more susceptible to infection, or to sort out only the highest quality stem cells to reprogram into heart or brain cells for research.

“What’s so powerful about flow cytometry is that it’s not limited to just telling you what type of cell you’re looking at, but all sorts of other functional information, like whether the cell has been affected by disease or whether it has changed in response to drugs,” says Core Director Jane Srivastava.

A great value of flow cytometry is that it allows scientists to quantify and study the variability among populations of cells, with single-cell resolution. Researchers tag specific molecules or structures within cells with fluorescence, which makes them visible to the cytometer’s microscope. They might fluorescently tag a protein overexpressed in cancer cells, for instance, to quickly identify the presence of these cells in a tumor. Or they might use a fluorescent tag that only switches on when a particularly signaling molecule is active to determine how many of the cells in a group are sending this signal.

To add such fluorescent markers to their cells, researches often use fluorescent antibodies that bind to particular molecules inside a cell.

For instance, scientists in the Gladstone Institute of Neurological Disease bathe mixtures of brain cells with fluorescent antibodies that bind to a specific protein found in microglia, the brain’s resident immune cells. Then, they can use fluorescence-activated cell sorting—the version of flow cytometry that physically separates cells into groups—to isolate only the cells containing this protein, which lights up under the cytometer’s laser. Separating these cells lets the researchers more easily study the role of microglia in conditions like epilepsy, multiple sclerosis, and Alzheimer’s disease.

“Flow cytometry is part of a pipeline that is becoming more and more important in biomedical research.”

Other scientists turn instead to genetic engineering to make cells produce informative fluorescence. Assistant Investigator Michael Alexanian, PhD, for example, coaxes stem cells to become particular types of heart cells. This process, however, is imperfect and results in a complex mixture of different cell types. So, he uses fluorescence-activated cell sorting to sift through his samples and select the heart cells of interest.

To do this, he engineers the cells to have a gene for a fluorescent tag combined with a particular heart-cell-specific protein. When the protein is produced by cells, the fluorescent marker is also generated. Then, a cell sorter machine in the Flow Cytometry Core can separate his cells into two piles: the heart cells that emit fluorescence (and contain the protein of interest), and the ones that don’t.

Researchers can also use “functional” dyes that change color based on the presence of a drug, the movement of calcium across a membrane, or even the charge of the cell—among other things.

“These kinds of functional dyes are just starting to get more popular, and I’d love to see more researchers using them,” says Srivastava.

The more aspects of a cell can be studied at once, the better scientists can understand how different cells relate to each other.

Traditionally, most flow cytometers could simultaneously scan cells for about a dozen different fluorescent colors at once. In recent years, a new technique—dubbed spectral cytometry—has emerged, using the full spectrum of colors to capture more shades of fluorescence in one sample. This has expanded the number of different tags researchers can look for in a single flow cytometry experiment.

“Rather than using a separate filter for each signal, the spectral cytometer looks at the whole spectrum and assigns a kind of fingerprint to each fluorescence,” explains Srivastava. “This has just started to come out in the last few years and I think it’s really the future of flow.” 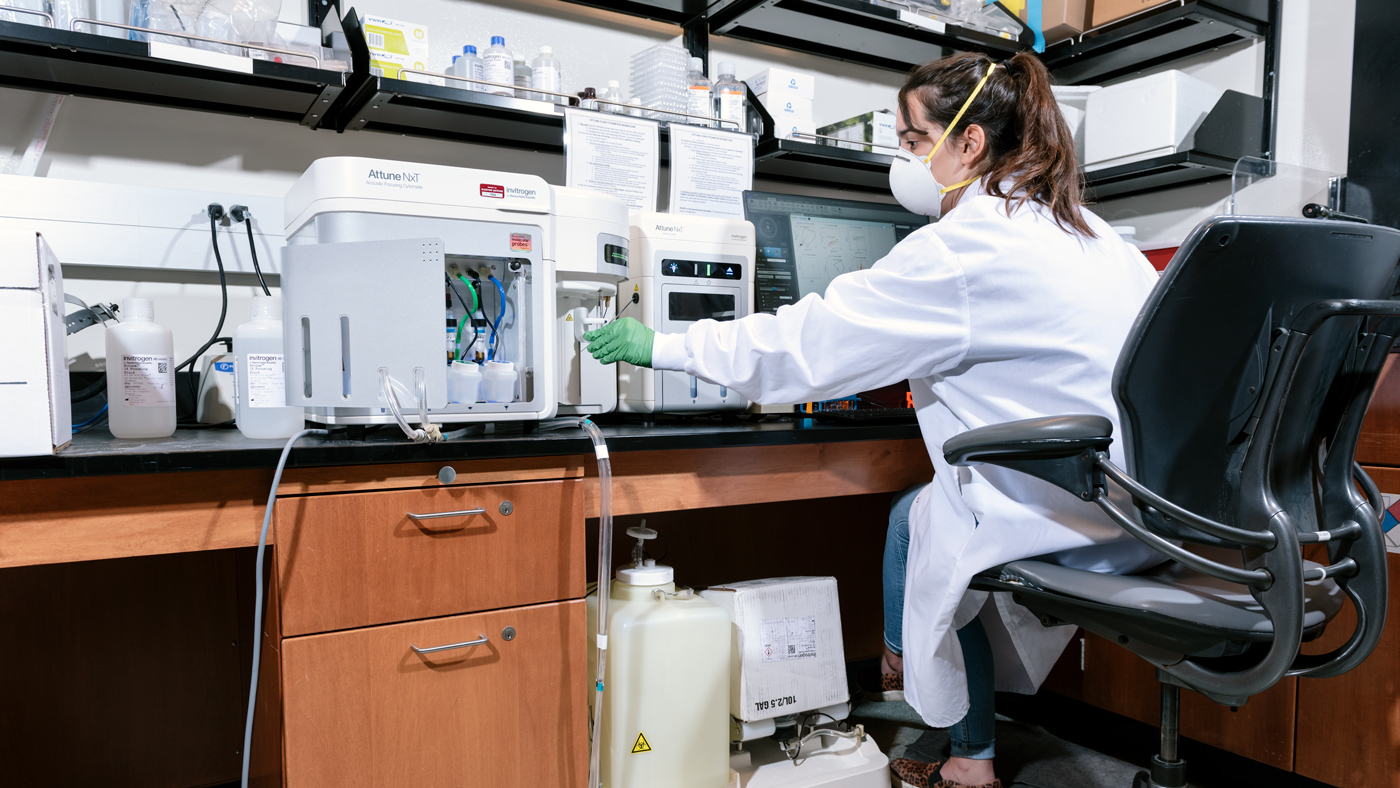 Gladstone researchers—such as Graduate Student Ivana Vasic, seen here—can study more and more aspects of a cell in a single experiment thanks to advances in flow cytometry.

Nadia Roan, PhD, a senior investigator at Gladstone, uses flow cytometry to probe what makes some immune cells more susceptible than others to infection with HIV. She has used Gladstone’s Flow Cytometry core to isolate precisely defined subpopulations of T cells to study HIV persistence in these cells.

“I’m excited to use the new cytometer to understand at a deeper level the immune cells that HIV targets for infection, and how HIV manipulates these cells and is capable of persisting for decades despite suppressive antiretroviral therapy,” says Roan.

A Pathway to Single-Cell Experiments

There have been rapid advances in techniques that allow scientists to analyze the molecular details of single cells. So as biomedical researchers increasingly reveal the complexity and diversity within groups of cells once considered uniform, flow cytometry is only becoming more important.

“We can do single-cell sorting incredibly quickly,” says Srivastava. “It can take people hours to manually pick individual cells from a culture to use in single-cell experiments. We can do that in a more automated way in a matter of minutes.”

Once Gladstone researchers sort cells using a fluorescence-activated cell sorting machine in the Flow Cytometry Core, they can turn to the plethora of other single-cell approaches that let them analyze those cells. For instance, they can genetically sequence the cells to determine how variations in their DNA might relate to variations in the cell’s properties.

“Flow cytometry is not going away any time soon,” says Srivastava. “It’s part of a pipeline that is becoming more and more important in biomedical research.”