Why Do Some Neurons Degenerate and Die in Alzheimer’s Disease, but Not Others?

Yadong Huang (right) and his team uncover evidence that neurons with high levels of the protein apolipoprotein E (apoE) are more sensitive to degeneration. Shown here in the lab with Nicole Koutsodendris (left), graduate student and co-author of the new study.

In the brain of a person with Alzheimer’s disease, neurons degenerate and die, slowly eliminating memories and cognitive skills. However, not all neurons are impacted equally. Some types of neurons in certain brain regions are more susceptible, and even among those subtypes—mysteriously—some perish and some do not.

Researchers at Gladstone Institutes have uncovered molecular clues that help explain what makes some neurons more susceptible than others in Alzheimer’s disease. In a study published in the journal Nature Neuroscience, the scientists present evidence that neurons with high levels of the protein apolipoprotein E (apoE) are more sensitive to degeneration, and that this susceptibility is linked to apoE’s regulation of immune-response molecules within neurons.

“This is the first time such a link has been established, which is quite exciting and could open new paths to developing treatments for Alzheimer’s disease,” says Gladstone Senior Investigator Yadong Huang, MD, PhD, senior author of the study.

ApoE has long been a focus of Alzheimer’s disease research because people carrying a gene that produces a particular form of apoE (called apoE4) have a higher risk of developing the disease. For this study, Huang and his team harnessed recent advancements in single-cell analysis to study the potential role of apoE in the variable susceptibility of neurons in Alzheimer’s disease.

Specifically, they applied a technique known as single-nucleus RNA sequencing, which reveals the extent to which the different genes in any given cell are expressed and converted into RNA, the intermediate between genes and proteins. This approach allowed them to compare individual cells within a cell type, as well as across different cell types. 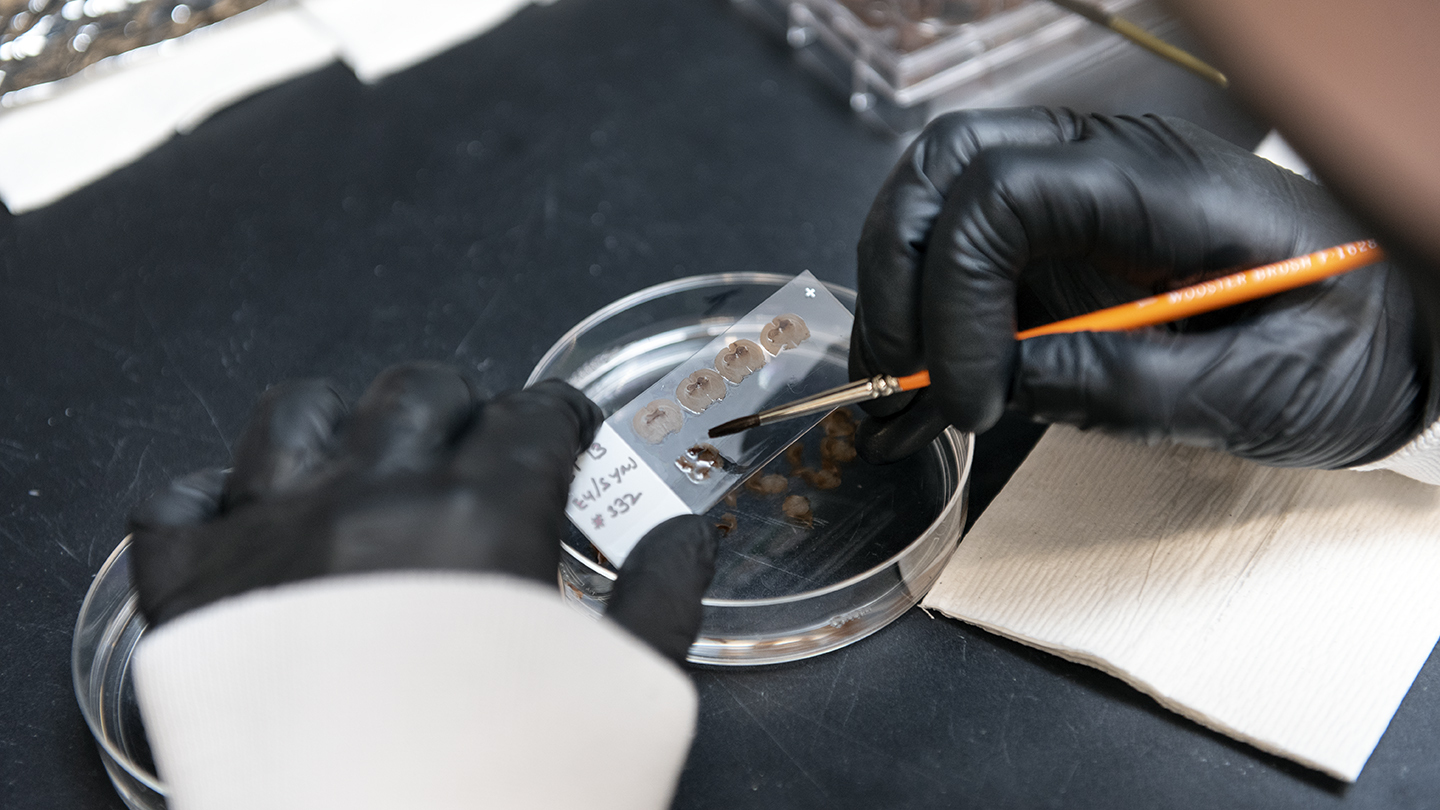 Gladstone scientists studied both mouse and human brain tissue to find a link between the amount of apoE and immune-response genes.

In both mice and humans, the analysis showed that neurons varied greatly in their extent of apoE expression, even within the same subtype. In addition, the amount of apoE expression was strongly linked to the expression of immune-response genes, which also varied significantly among neurons.

Digging deeper, the researchers examined the connection between apoE and the immune response genes. They found that, in both mouse and human neurons, high levels of apoE turned on genes in the major histocompatibility complex class-I (MHC-I). MHC-I is part of a pathway involved in eliminating excess synapses (connections between neurons) during brain development, and may also alert the immune system to damaged neurons and synapses in the adult brain.

“This was an intriguing clue that by controlling the expression of MHC-I in neurons, apoE might help determine which neuron should be recognized and cleared by the immune system,” says Kelly Zalocusky, PhD, first author of the study and a scientist in Huang’s lab at Gladstone.

A Process Gone Awry Leads to the Progressive Destruction of Neurons

The team found that, in brain tissue, the proportion of neurons expressing high levels of apoE and MHC-I genes fluctuates in a way that closely matches neurodegeneration and the progression of Alzheimer’s disease.

They observed this relationship both in mouse models of Alzheimer’s disease and in human brain tissue at different stages of neurodegeneration. Their work also revealed a causal link between the expression of MHC-I induced by apoE and the increase in tangled aggregates of a protein called tau, which is a hallmark of Alzheimer’s disease and is a good predictor of neurodegeneration. 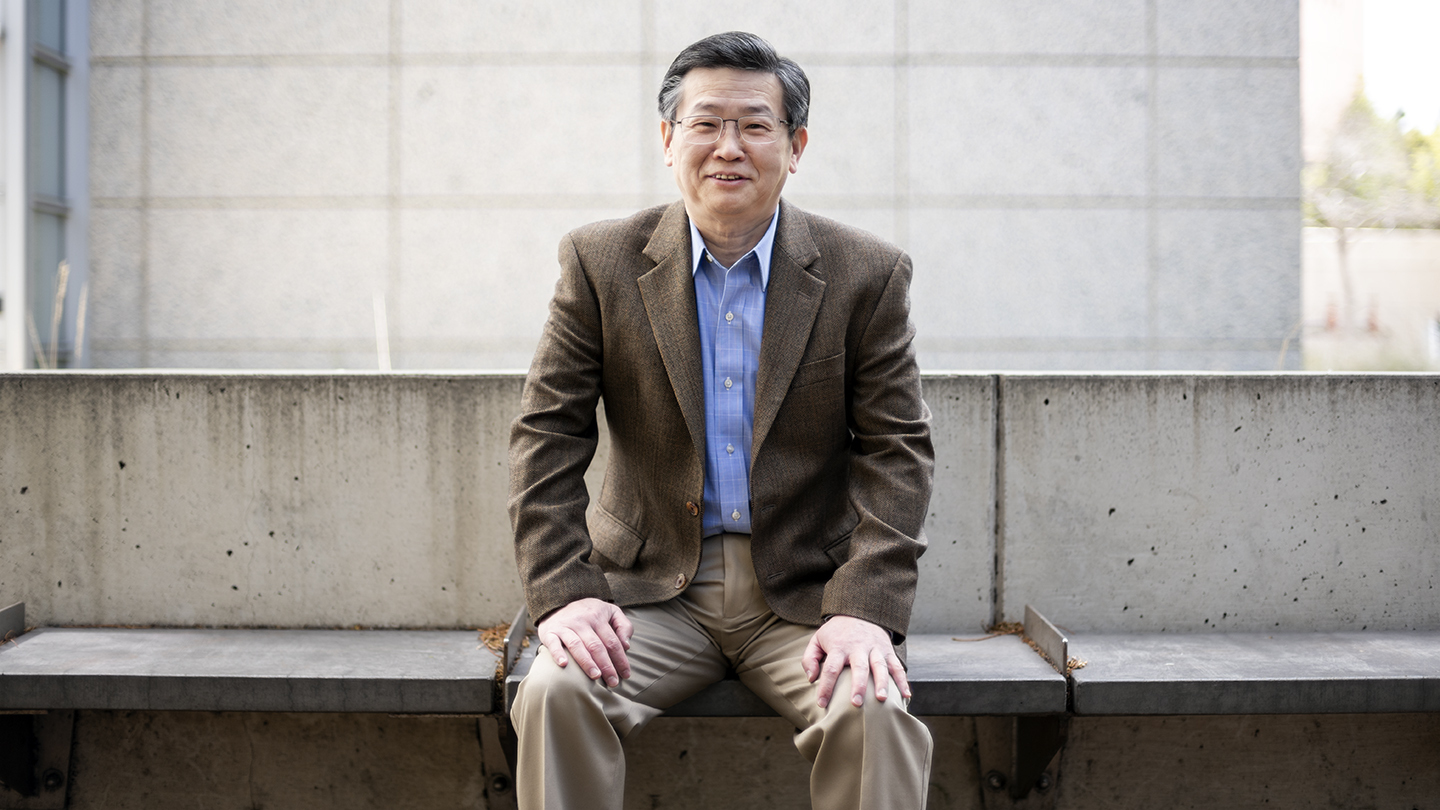 Huang focuses the research in his lab on finding new potential treatments for Alzheimer’s disease and other neurodegenerative disorders.

So, taken together, what do all these findings mean?

“We think that, normally, apoE turns on the expression of MHC-I in a small number of damaged neurons to produce ‘eat me’ signals that mark the neurons for destruction by the immune cells,” says Huang, who is also director of the Center for Translational Advancement at Gladstone, as well as professor of neurology and pathology at UC San Francisco. “You don’t want to keep damaged neurons around because they could malfunction and cause problems.”

But in Alzheimer’s disease, the scientists think this normal process for clearing out damaged neurons may become overactivated in a larger number of cells, leading to the progressive loss of neurons.

In other words, aging brains may face stressors that boost the amount of apoE in some neurons past healthy levels. The study shows that neurons carrying the form of apoE associated with increased risk of Alzheimer’s disease, apoE4, are particularly susceptible to these stressors. This excess apoE turns on the expression of MHC-I, marking these neurons for destruction. Meanwhile, neurons with lower levels of apoE remain unharmed. Consequently, this process results in selective neurodegeneration within a given neuron type in Alzheimer’s disease, guided by the level of apoE.

Further research could help clarify how apoE and MHC-1 determine which neurons die and which survive in Alzheimer’s disease.

“Additional studies could reveal potential new targets for treatments that may be able to disrupt this destructive process in Alzheimer’s disease and potentially in other neurodegenerative disorders as well,” says Huang.

The paper “Neuronal ApoE Upregulates MHC-I Expression to Drive Selective Neurodegeneration in Alzheimer’s Disease” was published in the journal Nature Neuroscience on May 6, 2021.