Sonali Chaturvedi and her colleagues have developed a new class of therapeutics, called feedback disruptors, that have the potential of transforming treatments for viral diseases.

Viruses in the herpesvirus family are leading causes of birth defects, blindness, and failed organ transplants worldwide. Antiviral drugs can combat these viruses, but patients often develop resistance to the drugs—rendering them ineffective.

Now, a team of researchers at Gladstone Institutes led by Leor Weinberger, PhD, and Sonali Chaturvedi, PhD, has developed a novel class of therapeutics, called feedback disruptors, that have the potential to be resistance-proof drugs.

Some viral proteins that are critical for virus growth become toxic to cells at high levels. So, these proteins turn off their own production when the level gets too high to prevent the cells they depend on from dying—a system known as a negative feedback loop.

As reported in the journal Cell, feedback disruptors target and break these genetic feedback loops, causing infected cells to self-destruct and stopping infection in its tracks.

“For decades, naturally abundant genetic feedback circuits have been analyzed and characterized, but how to translate these findings to medicines has remained a challenge, until now,” says Gábor Balázsi, PhD, the Henry Laufer Professor of Biomedical Engineering at Stony Brook University, who was not involved in the research. “This study shows, for the first time, that feedback circuits can be a drug target to treat viruses. This is an entirely new antiviral therapy concept that could apply broadly.”

Cutting the Brakes on Feedback Circuits

Existing herpesvirus drugs work by poisoning the replication machinery that viruses use to multiply inside an infected cell. However, the specific viral proteins targeted by these drugs can swiftly develop just a small number of changes, or mutations, that enable them to evade the attack.

“Antiviral drug resistance is a huge problem that affects millions of people around the world,” says Chaturvedi, first author of the new study and research investigator at Gladstone. “That’s why I care so deeply about designing therapies that are resistance-proof.”

The new feedback-disrupting approach arose from an earlier discovery in Weinberger’s lab of a key feedback loop in cytomegalovirus (CMV), a common type of herpesvirus. Within an infected cell, this loop regulates the production of IE86, a protein needed for the virus to multiply. Once IE86 reaches high enough levels, it switches off its own production until its concentration subsides and stabilizes. This is because too much IE86 is toxic to cells. 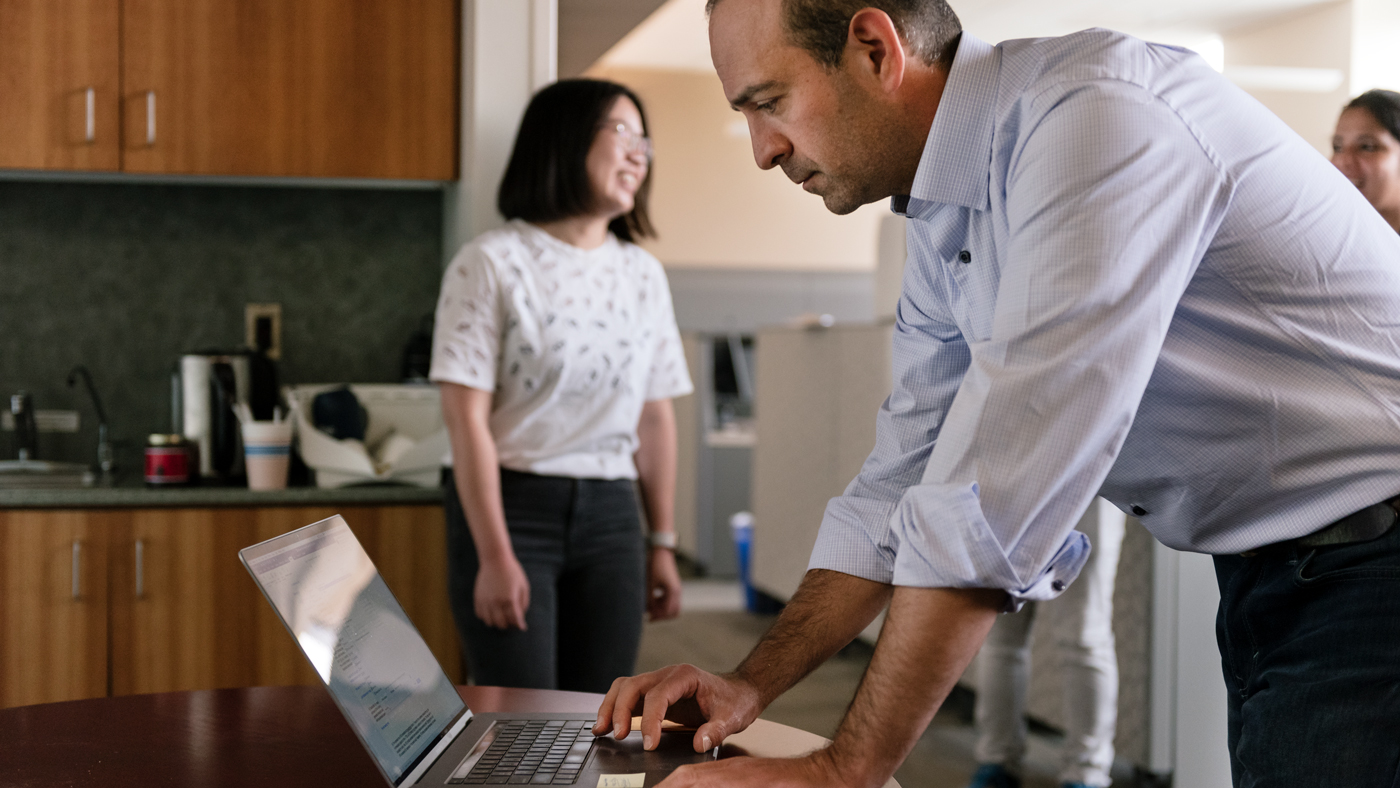 Weinberger and his team found that the CMV virus was unable to evolve resistance to feedback disruptors.

In lab experiments, when the team introduced genetic alterations to “cut the brakes” on the loop, IE86 production soared, destroying infected cells before more virus could be made.

“It’s counterintuitive, because we’re ramping up production of a viral protein, but ultimately this counteracts infection instead of worsening it,” says Chaturvedi.

The scientists realized that if they could develop a drug to disrupt this loop, they could potentially treat CMV infection while avoiding drug resistance.

“This study shows that resistance to feedback disruptors requires the virus to make numerous mutations at multiple different genomic locations, to essentially reconstitute a new feedback circuit,” says Weinberger, senior author of the study, as well as William and Ute Bowes Distinguished Professor and director of the Center for Cell Circuitry at Gladstone. “The likelihood of this occurring is vanishingly small and lab experiments recapitulated this; the virus had little problem evolving resistance to current antivirals, but was unable to evolve resistance to feedback disruptors.”

Now, the challenge was to develop a candidate for such a drug. Employing biochemical experiments, mathematical modeling, and synthetic biology, the researchers developed a small piece of synthetic DNA that binds to IE86 and prevents it from blocking its own production. They called this new drug candidate a feedback disruptor.

In one key experiment, the team showed that the feedback disruptor continued to be effective against CMV in cells for many months, without the virus ever developing resistance. In contrast, CMV can become resistant to the antiviral drug acyclovir in just 2 days. The researchers also found that mice infected with a version of CMV fared better when treated with a feedback disruptor than with a placebo.

Next, the team demonstrated that feedback disruptors could be developed to target similar feedback loops used by other viruses, beginning with herpes simplex virus 1 (HSV-1), the leading infectious cause of blindness. They found that, after infection with HSV-1, the eyes of mice that had been treated with feedback disruptors experienced a significant drop in viral infection.

In addition, the researchers developed a feedback disruptor against SARS-CoV-2, the virus that causes COVID-19, showing promising antiviral effects in cell experiments. 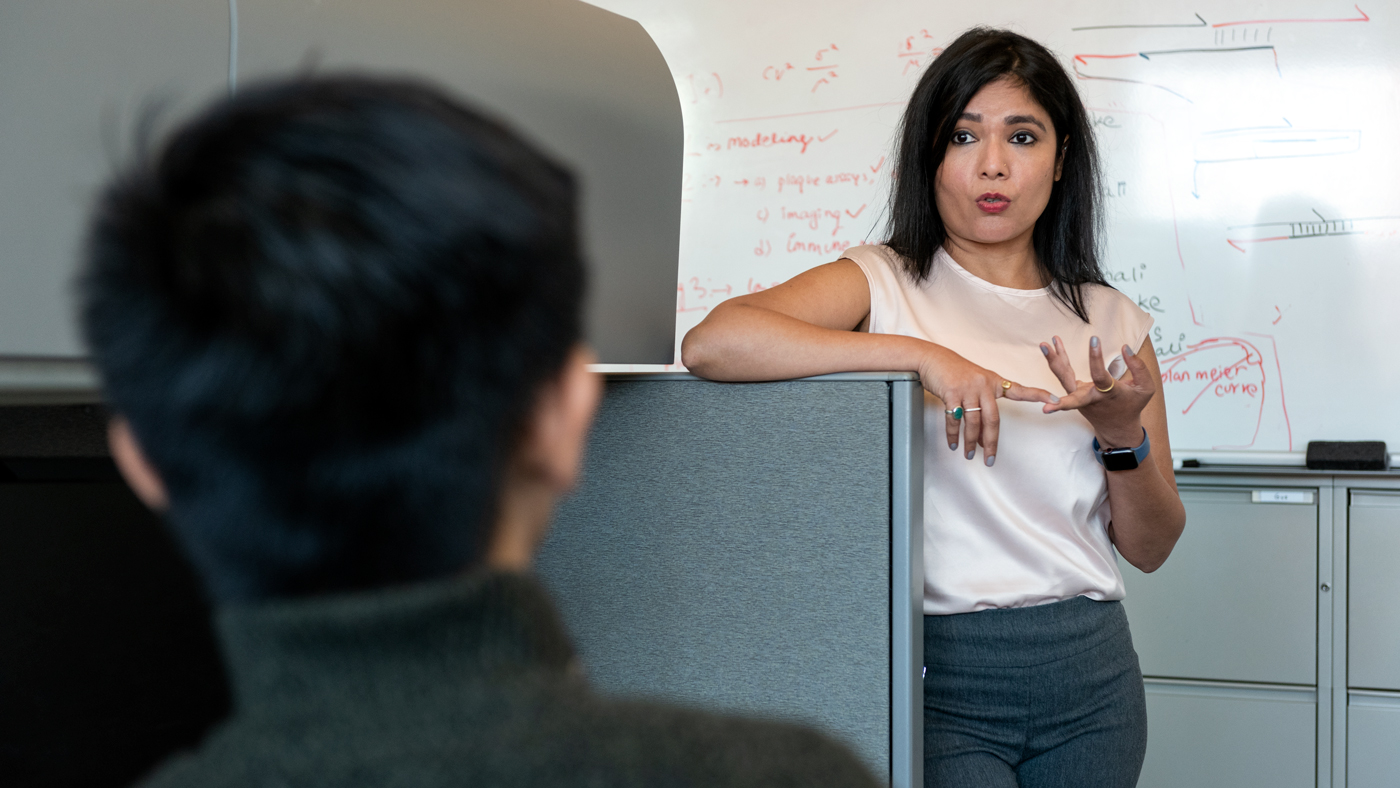 The new class of resistance-proof therapeutics developed by Chaturvedi and her colleagues could be effective not only for CMV and HSV-1, but also for viruses like SARS-CoV-2.

“This is very encouraging because it suggests that the feedback-disruptor strategy is not limited to DNA-based viruses like CMV and HSV-1, but can also be designed for RNA viruses like SARS-CoV-2,” says Chaturvedi.

In fact, the researchers anticipate that the same strategy could be applied to any disease involving a feedback loop that overproduces a key protein when broken. Now, the team is working to determine whether feedback loops could be targeted in cancer, another disease with major drug-resistance challenges. In the future, feedback disruptors could also potentially be developed against bacterial diseases.

“There is a critical need for better options to treat viral infections, such as CMV and HSV-1, that evolve resistance to current antivirals,” says Weinberger, who is also professor of biochemistry and biophysics, and pharmaceutical chemistry at UC San Francisco. “Feedback loops have been studied for decades and now we may be able to target them therapeutically to overcome resistance.”

The paper “Disrupting autorepression circuitry generates ‘open-loop lethality’ to yield escape-resistant antiviral agents” was published in Cell on May 12, 2022.