Linh Huynh is the new director of diversity, equity, and inclusion (DEI) at Gladstone.

In April 2021, Gladstone Institutes formalized its commitment to diversity, equity, and inclusion (DEI) by launching an action plan to bring about real change.

Now, Linh Huynh (she/her) has joined Gladstone as the director of DEI to help implement this strategy. Huynh will develop and lead DEI programs, and promote the importance and value of a diverse and inclusive environment within the organization.

“I really appreciate the deeply intentional and dynamic DEI work being done here,” says Huynh. “Gladstone is not only committed to enhancing diversity and inclusion, but also to embedding these values into the fabric of the organization. That too is my goal.”

For Huynh, DEI work is also intricately connected to her personal journey and identity.

“My commitment to this work grew out of my experience as a first-generation college student from an immigrant family,” she says. “Having lived in three different countries and navigated complex cultural institutions, I witnessed both the challenges and power of DEI in practice.”

From Vietnam to California

Born in Vietnam, Huynh spent the first 11 years of her life there. She then moved to Alhambra, California—a city located 8 miles east of Los Angeles—with her parents and older sister. They were leaving behind some of the financial hardships of their native land and reuniting with most of her mother’s family, who had immigrated after the Vietnam War.

Huynh describes hers as a very common immigrant story. Her parents ran their own small business in Vietnam, but both had to start over when they arrived to the US. Her mother worked in a nail salon and her father picked up low-paying jobs to help the family get by.

“My parents made such stark sacrifices to give my sister and me a better life than they had,” says Huynh. “They moved to this country so we could pursue our education—an opportunity they didn’t have because of the war.”

As she eventually began navigating the college application process, Huynh became aware of the numerous barriers faced by students like herself. She is the first in her family to complete high school and go to college.

“When it came to applying for financial aid, I didn’t know half the information needed to fill out the forms and couldn’t ask my parents because they don’t speak English,” she says. “I realized the gaps that existed between where I was trying to go and my skills and abilities, and the lack of access to resources that I had. I really had to lean on my teachers and the programs that support students in my position.”

Huynh went on to complete her undergraduate degree at the University of California, Santa Barbara. There, she joined a program that worked with first-generation, low-income students. For Huynh, it was a formative experience that allowed her to connect with a community, create change, and help improve access and equity in education.

“Especially on a predominantly white campus, this program was one of the few places that truly felt like home,” she says.

Her passion for DEI continued to grow as she obtained a Master’s of Arts in higher education (with a concentration in diversity and social justice) at the University of Michigan, Ann Arbor. After her studies, she became an academic advisor, empowering undergraduate and graduate students as they navigated academic journeys and personal challenges.

“I truly saw how difficult it is to be a student of color, a first-generation student, or really any student who’s not well represented within their institution—and how important it is to address those inequities at an organizational level,” says Huynh.

"If we want to see different results, we need to change our ways of doing things."

In that role, she also collaborated with faculty and leadership to develop strategies for diversifying science, technology, engineering, and mathematics (STEM); incorporate inclusive teaching and learning practices; and organize events to help foster a sense of belonging.

Huynh then took on the position of assistant director in the Office of Enrollment Management at the same university, where she directed two high-impact mentorship programs. She also served on the leadership team for the Asian Pacific Islander Desi/American Staff Association, where she formed the Anti-Racism Working Group and facilitated training and educational sessions.

An Opportunity to Lead

For Huynh, coming to Gladstone is an opportunity to spearhead DEI efforts at a strategic level.

“By engaging with the Gladstone community, I want to help us examine our practices and approaches to doing things—what’s working and what’s not, who might have been excluded or marginalized, and how can we really drive change,” she says.

One of Huynh’s first steps will be to expand the recruitment and retention of employees and trainees from underrepresented groups in the sciences. Her objective—and that of Gladstone—is to have people across all positions reflect the diversity of identities, of lived experiences, of cultural backgrounds, and of racial and ethnic backgrounds found not only in the US, but in California and the San Francisco Bay Area, where Gladstone is located.

“Linh will lead initiatives and provide counsel to leaders and supervisors at Gladstone to ensure we make progress on the strategy we outlined,” says Jennifer Crosby (she/her), vice president of People Services at Gladstone. “Increasing the diversity of our internal community is a great place to start.”

To do so, Huynh will draw on research-based approaches she employed in her previous work to drive the recruitment of groups historically underrepresented in STEM, while collaborating with investigators and senior leadership to create sustainable organizational change.

“It’s important that we examine our recruitment and hiring practices to ensure that we are centering equity and inclusion,” says Huynh. “If we want to see different results, we need to change our ways of doing things.” 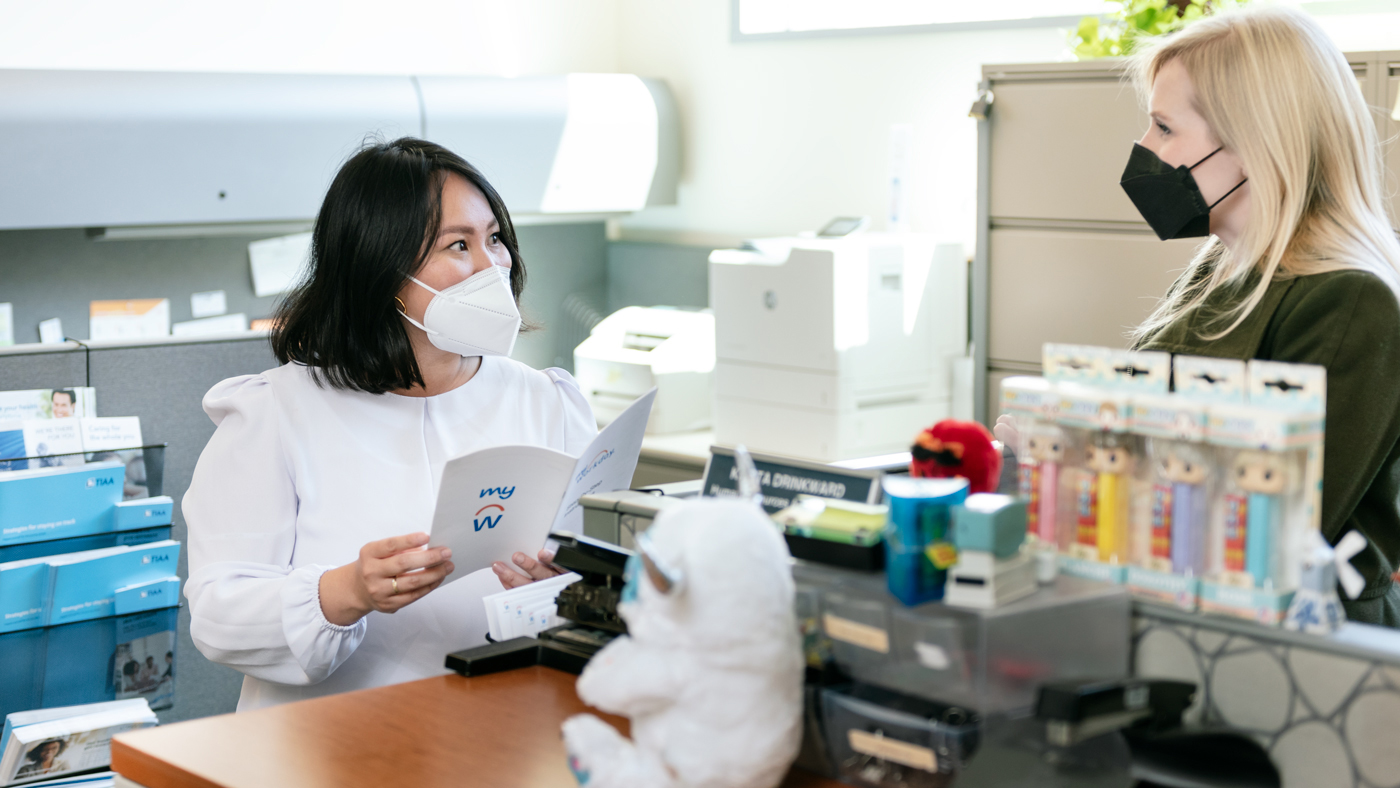 Linh Huynh, seen here with her colleague Krista Drinkward, urges everyone to think about how DEI relates to their own work.

For instance, that can involve taking a close look at how job descriptions are written, where jobs are posted, how candidates are being evaluated, and how—and by whom—interviews are conducted.

Huynh also wants to get every individual involved in the organization’s DEI efforts. People are often passionate about the topic, but may not see how it directly relates to their work.

“At Gladstone, I think we agree that DEI is important,” she says. “I want to help everyone see that DEI is a part of our work and responsibilities, individually and collectively. We need to find a way to keep pushing ourselves and driving these initiatives, because there’s no end point with DEI.”

Huynh urges each individual to think about how DEI is connected to their work. Whether you’re creating a policy or preparing a document, she says you should think about the language you’re using, who might be impacted, who you’ve consulted—and more importantly, who wasn’t consulted.

“DEI is truly a collaborative effort and I look forward to working with everyone at Gladstone to advance our DEI goals,” she adds. “The road to meaningful change is not easy, but I know the results will be well worth it.”

The Keys to Success

Drafting a DEI strategy was a significant milestone for Gladstone. But it’s only the starting point. To bring about sustainable change, Huynh outlines three keys to success: accountability, transparency, and accepting mistakes.

Accountability begins with establishing clear, measurable goals, and determining who will be responsible for each one. Then, it’s all about evaluating progress. 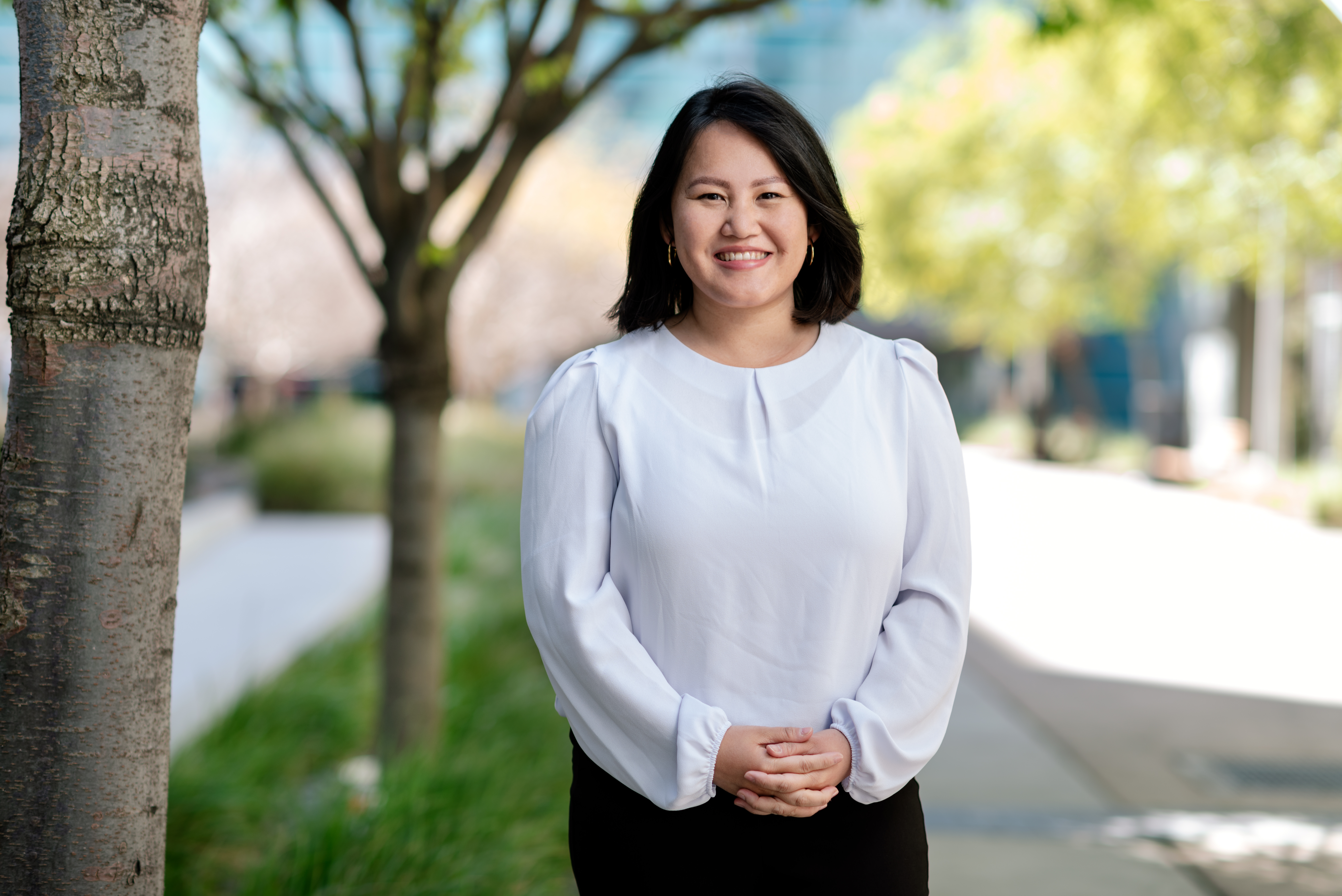 Linh Huynh says we can't let the fear of making mistakes prevent us from making progress in DEI.

“Oftentimes, we want to get to the end, to see results, but our successes will not be immediate,” says Huynh. “We’re going to have to pause, and reflect along the way. And we’re going to iterate.”

Huynh compares the process to scientific experiments. You start with a hypothesis and something may not work according to plan. So, you take a moment to figure out what might have gone wrong or whether you forgot a step along the way. You think about how you can improve your process for the next experiment.

“It’s also about letting people know that their feedback is actually having an impact,” she says. “Our community needs to know we’re listening to them and using the information they share to improve our organization.”

And the final element to ensuring progress is accepting mistakes. Huynh explains that the fear of making mistakes too often holds us back from taking action and doing DEI work.

“We’re going to make mistakes because we’re human,” she says. “It’s going to get messy, and we need to find a way to be okay with that. The important thing is, when we do make mistakes, to acknowledge the impact of our actions, take responsibility, and commit to doing better.”

“Our DEI strategy is a living document,” adds Huynh.” It’s going to keep evolving as we come up with new ideas and continue to reflect. And that’s the way it should be. That’s what will lead to meaningful, long-lasting change.”