Mitochondria in the Middle

At first blush, it might seem that physician-scientist Bryce Mendelsohn, MD, PhD, likes to play both ends against the middle. Having just finished two years of residency in pediatrics, the young researcher joined the Gladstone Institutes in July to work in a laboratory focused largely on Parkinson’s and Alzheimer’s diseases.

But in fact, the pediatrician’s research underscores the promising therapeutic potential of Gladstone’s focus on basic science. Dr. Mendelsohn is concentrating his postdoctoral fellowship work on mitochondria, the energy-producing part of all human cells. And by unraveling the essentials of how human biology works and where it goes wrong, Dr. Mendelsohn could well uncover new knowledge about the root causes for a host of diseases—including those that strike at both ends of the age spectrum.

“At Gladstone, we think it’s good to have multiple perspectives working on the same research goal,” says Gladstone Parkinson’s disease expert Ken Nakamura, MD, PhD. “Bryce and I have a shared interest in mitochondria and bioenergetics, which have relevance to both neurodegenerative and pediatric diseases. Our work on energy metabolism transcends any particular age group.”

Relatively little is known about mitochondria, even though they are thought to be nearly 1.5 billion years old. They were first described in the 1800s, but it wasn’t until the 1960s that doctors began to diagnose diseases linked to mitochondrial dysfunction, in which these organelles process inadequate supplies of oxygen and/or insufficiently convert dietary nutrients into energy for essential cell functions.

So we’ve known for some time that genetic mutations in mitochondria cause a host of congenital diseases. But there is now a growing body of evidence indicating that mitochondrial dysfunction also contributes to neurodegenerative diseases that often strike the elderly. And this is where basic science’s ability to clarify exactly what happens at a molecular level is essential to the process of overcoming disease.

“I am mostly working on cells now, focusing on bioenergetics and metabolism,” says Dr. Mendelsohn, who is a postdoctoral fellow in Dr. Nakamura’s laboratory, with co-mentorship from metabolism expert Robert V. Farese, Jr., MD. Dr. Mendelsohn is also collaborating with virologist Eric M. Verdin, MD, on a group of proteins Dr. Verdin’s lab is studying—and that seems to regulate mitochondrial metabolism. “If I can find a gene that increases the energy that mitochondria make for cells, I will try gene therapy on a mouse model of Parkinson’s—as well as one of a congenital disease.”

“Regardless of the average age of people with the disease,” he adds, “I’ll be using the same scientific tools to discover new knowledge.”

Dr. Mendelsohn acquired his curiosity for molecular mitochondrial conditions such as hypoxia (insufficient oxygen) and ischemia (inadequate blood supply) while working on his MD/PhD at Washington University in St. Louis, studying with pediatrician and genetic-disease expert Jonathan D. Gitlin, MD. This came after a double major in biology and music at Emory University in Atlanta. The 30-something scientist is a cellist—but admits to playing a lot less since becoming a father four years ago. 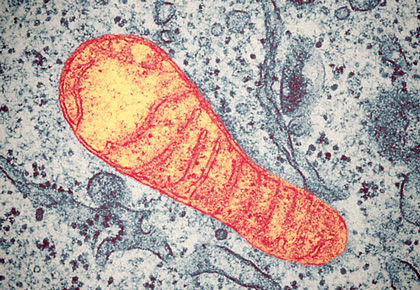 When it comes to mitochondria, several aspects of these organelles have long fascinated Dr. Mendelsohn—including the fact that they have their own genome and that the only place you can get mitochondrial DNA is from your mother.

So after finishing his graduate degrees in St. Louis, Dr. Mendelsohn went west to do a residency in both medical genetics and pediatrics at the University of California, San Francisco. This included two years of clinical work in the pediatric wards of most of the hospitals in San Francisco. And there he saw newborns struggling with a variety of conditions, including genetic mitochondrial diseases, such as Sengers syndrome, which causes eye deformities, and MELAS, a condition that includes mitochondrial encephalomyopathy (impairing brain and muscle function), lactic acidosis (an overproduction of lactic acid), and stroke-like episodes.

With almost nothing on the market other than vitamin supplements to treat hundreds of little-understood mitochondrial disorders, Gladstone’s work to understand the fundamentals of healthy and diseased mitochondria is clearly critical.

“The science is more interesting once you’ve seen the diseases,” says Dr. Mendelsohn, commenting his work as a physician informs his research. “And as awful as genetic diseases are for patients, they can be gifts to researchers—helping us better understand biology. You have to do the research to take advantage of those gifts, to make the effort and invest in the tools.”

“We’re trying to find ways to get the cells to make more energy,” continues the young doctor, whose love of children drew him to pediatrics—offering the perfect profession for his gentle demeanor. “We hope to find something that will be common to many of these disorders.”

Discovering a combination of genes that could get mitochondria to produce more energy “would be our wildest dream,” Dr. Mendelsohn adds with a hint of optimistic ambition, but with full recognition of the challenge he has set out for himself. “In science, nothing happens unless you make it happen—and at the end of two years here at Gladstone, I expect to have some promising progress to report.”

“As a pediatrician, I focus on ‘manufacturing’ issues that affect the development of a person—but here at Gladstone, I’m also investigating wear-and-tear breaks,” he says. “You need a ‘mechanic’ who can understand both how to build a car correctly—so as to diagnose the congenital defects that are like manufacturing flaws. But then you also need a mechanic who later can repair a car when it begins to break down, such as we see in Parkinson’s disease. And who knows, maybe some of the wear-and-tear issues come from subtle problems with the manufacturing that just took time to declare themselves.”

Whatever the analogy, many have high expectations for the postdoc.

“Bryce is full of energy and thinks his experiments through with great care—and actively solicits feedback from others,” says Ken Nakamura, MD, PhD, in whose lab Dr. Mendelsohn works. “He’s highly collaborative and has scientific expertise relevant to ongoing work in all three of our key research areas—cardiovascular, viral and neurological diseases.”