Scientists at the Gladstone Institutes identified two chemicals that improve their ability to transform scar tissue in a heart into healthy, beating heart muscle. The discovery advances efforts to find new and effective treatments for heart failure.

Heart failure afflicts 5.7 million Americans, costs the country $30.7 billion every year, and has no cures. When heart muscle is damaged, the body is unable to repair the dead or injured cells. Gladstone scientists are exploring cellular reprogramming—turning one type of adult cell into another—in the heart as a way to regenerate muscle cells in the hopes of treating, and ultimately curing, heart failure.

It takes only three transcription factors—proteins that turn genes on or off in a cell—to reprogram connective tissue cells into heart muscle cells in a mouse. After a heart attack, connective tissue forms scar tissue at the site of the injury, contributing to heart failure. The three factors, Gata4, Mef2c, and Tbx5 (GMT), work together to turn heart genes on in these cells and turn other genes off, effectively regenerating a damaged heart with its own cells. But the method is not foolproof—typically, only ten percent of cells fully convert from scar tissue to muscle. 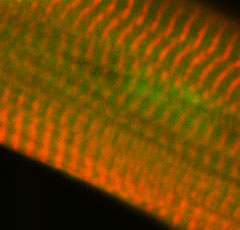 This heart muscle cell was reprogrammed from scar tissue in a mouse heart after a heart attack. [Image: Tamer Mohamed, Gladstone Institutes]

In the new study, published in Circulation, Gladstone scientists tested 5500 chemicals to try to improve this process. They identified two chemicals that increased the number of heart cells created by eightfold. Moreover, the chemicals sped up the process of cell conversion, achieving in one week what used to take six to eight weeks.

“While our original process for direct cardiac reprogramming with GMT has been promising, it could be more efficient,” said senior author Deepak Srivastava, MD, director of the Gladstone Institute of Cardiovascular Disease. “With our screen, we discovered that chemically inhibiting two biological pathways active in embryonic formation improves the speed, quantity, and quality of the heart cells produced from our original process.”

The first chemical inhibits a growth factor that helps cells grow and divide and is important for repairing tissue after injury. The second chemical inhibits an important pathway that regulates heart development. By combining the two chemicals with GMT, the researchers successfully regenerated heart muscle and greatly improved heart function in mice that had suffered a heart attack.

The scientists also used the chemicals to improve direct cardiac reprogramming of human cells, which is a more complicated process that requires additional factors. The two chemicals enabled the researchers to simplify the process bringing them one step closer to better treatments for heart failure.

“Heart failure afflicts many people worldwide, and we still do not have an effective treatment for patients suffering from this disease,” said Tamer Mohamed, PhD, first author on the study and a former postdoctoral scholar at Gladstone. “With our enhanced method of direct cardiac reprogramming, we hope to combine gene therapy with drugs to create better treatments for patients suffering from this devastating disease.”

Getting to the Heart of Complex Disease