There is new hope in the fight against Huntington’s disease. Scientists at the Gladstone Institutes discovered that changing a specific part of the huntingtin protein prevented the loss of critical brain cells and protected against behavioral symptoms in a mouse model of the disease.

Huntington’s disease causes jerky, uncoordinated movements and a loss of control of motor function. It also results in deficits in learning and memory, as well as personality changes, such as dementia, depression, and aggression. Huntington’s is ultimately fatal, and there are no treatments to stop or slow its progression.

The disease is linked to a mutation in the Huntingtin gene, which causes a protein of the same name to fold up incorrectly like misshapen origami. Neurons cannot get rid of the misfolded protein, so it builds up in the brain, wreaking havoc in the cells.

In the new study, published in the Journal of Clinical Investigation, scientists in the laboratory of Steve Finkbeiner, MD, PhD, showed that modifying the huntingtin protein through a process called phosphorylation can actually make the protein less toxic and allows cells to eliminate it more easily. In fact, phosphorylating a specific spot on the protein called S421 protected a mouse model of Huntington’s from developing symptoms of the disease. 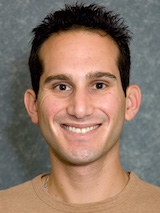 “I was shocked at the profound effect phosphorylation had on the Huntington’s model mice,” said first author Ian Kratter, MD, PhD, a former graduate student at Gladstone and the University of California, San Francisco. “They showed few signs of the motor dysfunction, depression, or anxiety that are characteristic of the disease. In most of our tests, they were virtually indistinguishable from healthy mice.”

The mice were also protected against neuron death, particularly in the striatum, the movement and reward center of the brain that is first affected in Huntington’s disease. The scientists think that phosphorylation enables neurons to remove more of the harmful protein so it does not accumulate and damage the cell.

“Phosphorylation helps control how proteins fold and the systems in cells that clear proteins,” explained Finkbeiner, who is a senior investigator at Gladstone. “This is exciting because a lot of the work we’ve done points to these protein removal pathways as being important not only for Huntington’s disease, but also for other neurodegenerative disorders. Understanding how phosphorylation links to these pathways could help treat several different brain diseases.”

The researchers are now exploring ways to mimic the effects of phosphorylation with a drug.

Since Shinya Yamanaka discovered a method to create human induced pluripotent stem (iPS) cells, Gladstone researchers have built on this technology to create numerous iPS cell lines, coax iPS cells into a myriad of tissue types, use them as a tool to study disease, and even begin creating therapies using these cells.

The funded program will, for the first time, introduce gene editing and stem cell therapies in the search for a potential cure

Scientists have developed sophisticated models to unravel complex human biology in their pursuit of cures.