The president's conference room at Gladstone was renamed and dedicated as the Lloyd “Holly” Smith Conference Room by Robert and Linda Mahley.

Before Gladstone Institutes was launched in 1979, founding president Robert Mahley, MD, PhD, initially said “no” to the job. He wondered how an old building of empty patient wards in San Francisco General Hospital could be transformed into a state-of-the-art research space.

But one day while Mahley was working in his lab at the National Institutes of Health in Maryland, he received a call from Lloyd Hollingsworth “Holly” Smith, Jr., MD, then the Chair of Medicine at UC San Francisco (UCSF) and Chair of the Search Committee for the founding director of Gladstone, who said he just happened to be in the lobby downstairs.

“He came up to speak with me, and I’m not entirely sure how, but this gentleman of great Southern charm and wit convinced me and my wife Linda to move out to San Francisco,” Mahley says.

Recruiting Mahley to take the helm at the nascent Gladstone Institutes was just the beginning of Smith’s lifelong support and advocacy for Gladstone’s now world-renowned scientific excellence and innovation. It was also the beginning of a deep friendship between the Smith and Mahley families.

“Holly was one of the first people to see the great value of doctors understanding and being involved in research. He helped pioneer the concept of the physician-scientist.”

Now, to honor their friend and his tremendous impact, Robert and Linda Mahley have made a generous donation to rename and dedicate the Gladstone president’s conference room as the Lloyd “Holly” Smith Conference Room.

“Holly was an indispensable advisor to me and to the other Gladstone presidents and investigators,” Robert Mahley says. “The president’s conference room has been the birthplace of major decision-making endeavors at Gladstone, so it felt right to rename it in his honor.”

Born in South Carolina during the Depression, Smith went on to graduate from Harvard Medical School. In 1964, he was recruited to UCSF, which he sculpted into a world-class institution over his 35 years as Chair of Medicine and associate dean in the UCSF School of Medicine. In retirement, he continued to serve as an advisor until his death in 2018, at the age of 94.

“Holly recognized that UCSF would be stronger if it had marvelous partners who had the same values, and mission, and dedication to excellence,” says current UCSF Chancellor Sam Hawgood. “He saw that in Gladstone Institutes and was a powerful advocate to make them part of the UCSF network.”

Smith’s visionary approach to medicine centered on the powerful link between clinical care and research, which he embraced from the start of his career: While serving in the Korean War, he was sent to the field to help develop and test an artificial kidney on soldiers injured in combat.

“Holly was one of the first people to see the great value of doctors understanding and being involved in research,” Mahley says. “He helped pioneer the concept of the physician-scientist.”

That vision underpinned Smith’s dedication to Gladstone, where every Tuesday at noon for over 10 years, he met one-on-one with Mahley to offer support and advice. Afterwards, he would spend the afternoon connecting with scientists.

“Holly was a true confidant who helped me find balance where I often saw only black and white,” Mahley says. “And he fostered a close-knit community at Gladstone by taking the time to know people and showing genuine care for them.”

A Charming Advocate and Friend

Smith was particularly beloved for his memorable sense of humor; he always seemed to have a witty or self-deprecating quip at the ready. Linda Mahley remembers how, whenever he stooped to retie a shoe, he would look up and ask, “Is there anything else I should do while I’m down here?”

Smith’s magnetism and humility undoubtedly aided his role as a passionate champion for Gladstone. He helped recruit many of the investigators and was pivotal in securing philanthropic funding for Gladstone’s expansion after the move to Mission Bay in 2004.

“Holly said Gladstone was the best-kept secret in the Bay Area at the time,” Robert Mahley says. “Many potential donors had never heard of us, but he would turn on that Southern accent and soften them with his brilliant charm.”

Linda and Robert also admired Smith for his commitment to a healthy work-life balance. He and his wife Margaret had six children and often welcomed the Mahleys at their home.

“They had a remarkable partnership and adventure together,” Linda Mahley says. “Margaret, too, was a steadfast advocate for Gladstone, which is why we dedicated the conference room to both her and Holly.”

“Dad was devoted to the people and personalities of Gladstone,” said daughter Rebecca Coffman at the event. “For our family, the naming of the conference room will serve to keep memories of his passion alive.” 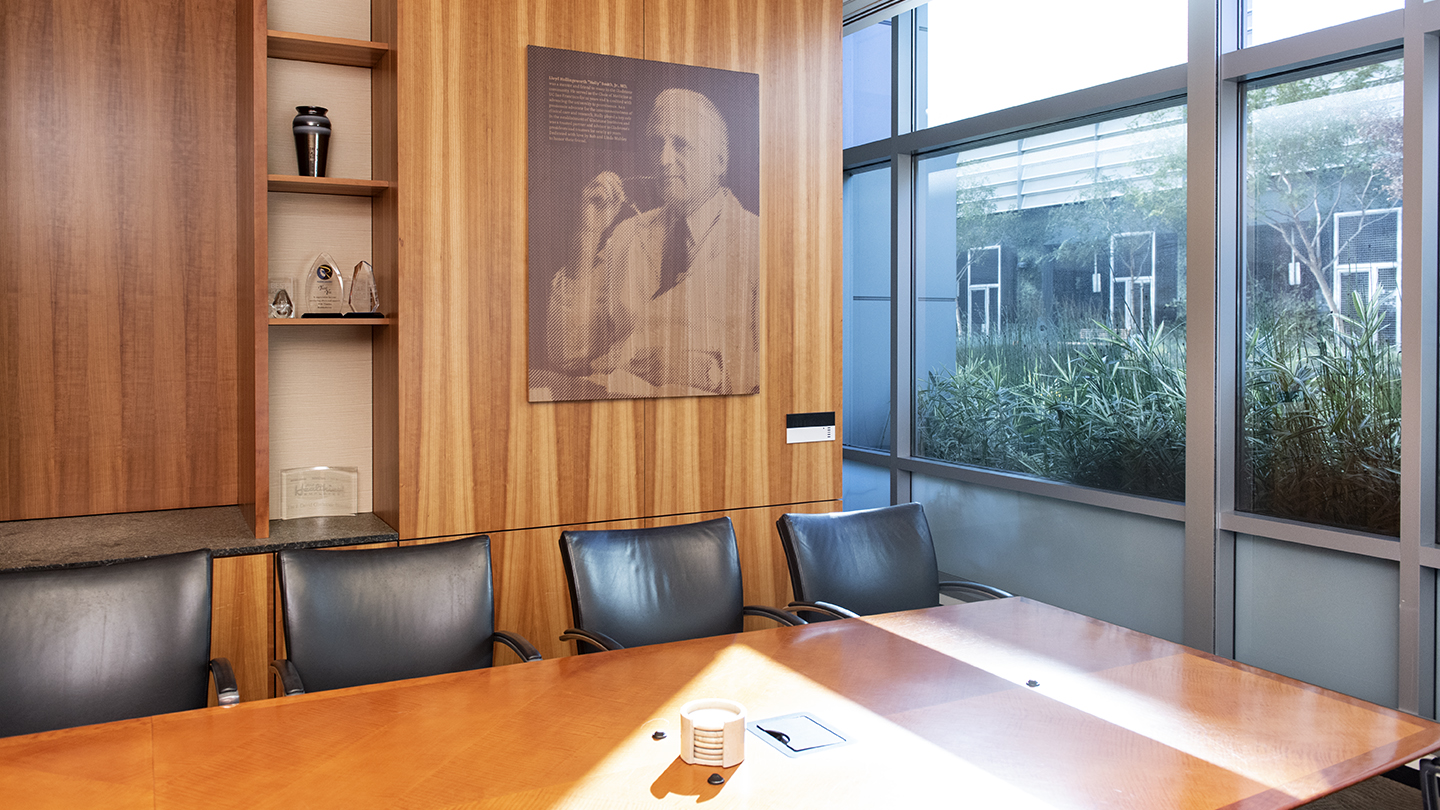 A portrait of Holly Smith was unveiled during the dedication event.

“With this dedication, even in his absence, Holly will continue to serve as mentor to me and other Gladstone leaders,” says current Gladstone President Deepak Srivastava, MD. “I am certain his presence will be felt as we chart our course for the future.”

Srivastava and Robert Mahley plan to carry on Smith’s legacy by reserving the conference room for one-on-one lunches every Tuesday at noon.

“I still think about Holly almost every day, what he would do or what he would think,” Mahley says. “This is a lifelong connection, no matter who’s alive or not. I’ll never forget it.”